I’m on the last stage of FE4 so I should be back next week with Aretha II.

I think I said last time I was going to try to do Dragon Slayer for the Epoch Super Cassette Vision. I had trouble finding an emulator and in the end I didn’t think it was worth spending any more time to play a game that probably wasn’t going to be very good anyway — CRPG Addict did a very full report on Dragon Slayer anyway. 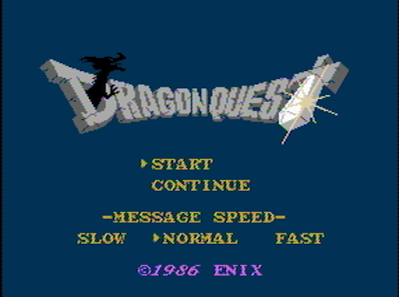 This is another game I don’t think needs a detailed introduction and coverage; even CRPG Addict did an entry on the game. It’s the first game that really matches the true “JRPG style” that we think of. Is this the first game to combine the Ultima style top-down world map/towns, with the command-based Wizardry combat? I don’t know of any game that does it prior to this but there may be a computer game that does so.

I remember when this game came out in the US. They gave away free copies if you subscribed to Nintendo Power, and there were hint guides since they were so scared Americans wouldn’t know what to do (although Japan had lots of hint guides as well). The US version was actually an upgrade from the Japanese version that improved the graphics and replaced the password system of the original with a battery-backed save. The translation used a pseudo-archaic English that isn’t in the original Japanese.

Also they changed the cover — this is something that US publishers do with Japanese games for a long time after this. It’s not hard to understand why; when DQ came out in Japan, Akira Toriyama was already very popular for both Dr. Slump and Dragon Ball (which had been running for 2 years at that point). So the cover naturally uses Toriyama’s art, which was surely a selling point for the game.

Since this art would not have meant anything in particular to American audiences, the localizers were probably concerned that it would look too childish or cartoony for the target audience of young boys. So they changed the cover to this: 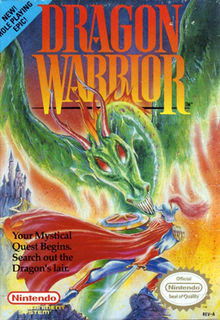 I have to say that I always found this rather patronizing and wondered if it were really necessary. But CRPG Addict has been harshly critical of the cartoony graphics of Zelda and other games, to the degree where he almost does not want to play them because of the art style. He mentions it every time he plays a Japanese game on his blog. I have a feeling that his opinion would have been the dominant one in the 1980s before anime had really become mainstream in the US, and so I suppose the localizers knew what they were doing.

I don’t think this game really holds up other than for nostalgia purposes; the vast majority of the game is grinding levels and money. The many remakes seem to have modified the numbers so that you don’t have to grind as much. 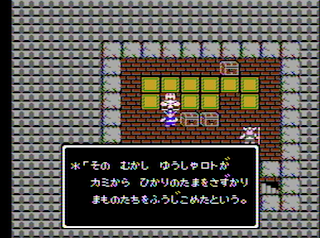 A couple of other notes: 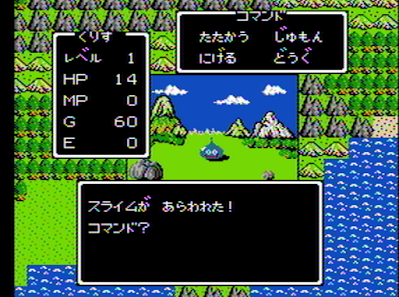 Dragon Quest II came out only six months after this game, which is extraordinarily fast development. According to the English wikipedia it even had delays, although the Japanese wikipedia does not confirm this. 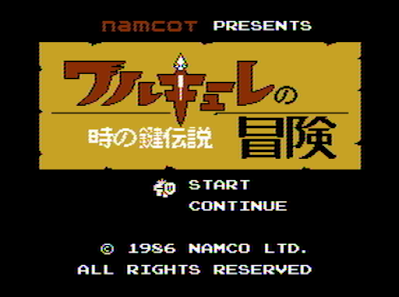 I have been familiar with Valkyrie the character for a while because she’s appeared as a cameo in so many Namco games (particularly the Tales series), and several characters from the games are in Namco x Capcom and Project X Zone. She was the heroine of four games — this one, a 1989 arcade game, and two mobile phone sidescrolling action games with RPG elements. 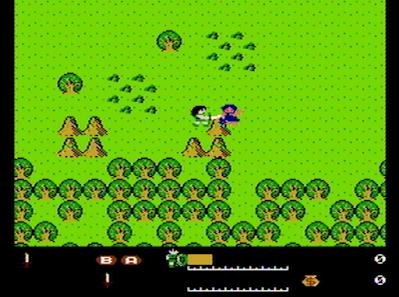 The original Famicom game is a spiritual successor to Hydlide, with Zelda influences. There are many similarities; the main difference is that you actually press a button to swing a sword. This is probably influenced by Zelda, as is the assignment of items/spells/weapons to the A and B buttons. Also, unlike Zelda and Hydlide, this game has a scrolling world map rather than different screens — this was easier to pull off on the Famicom than on computers, although computer RPGs did eventually introduce scrolling. The dungeons are also more Zelda-like than Hydlide-like.

As with Hydlide, a good portion of the game is just grinding levels, and wandering around the world with no hints trying to figure out what you can do. You can apparently finish the game in less than an hour if you know where to go. 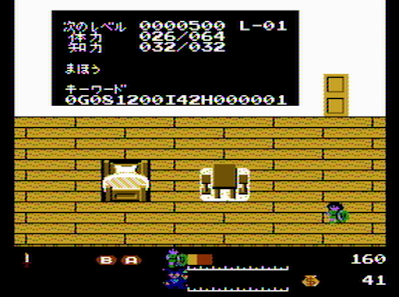 Initially you pick a blood type and a zodiac sign which affects your starting stats and the pace of levelling. I did B, which is faster levelling at the beginning, and Taurus which gives you a balanced magic/fight. 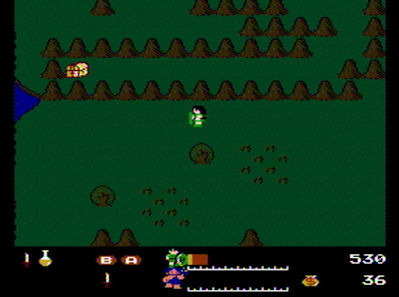 The first destination is an inn on the right where you can get a password, recover HP and MP for money, and raise levels. From here I grinded up to level 5 and then headed around west to where I saw a treasure chest. There was a big thing blocking the area but if you just keep attacking it freezes him. He dropped a key, but I was unable to open the chest. 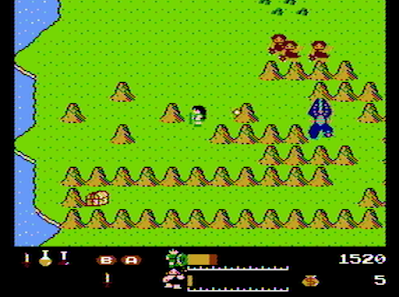 If you want to see more about the game, here’s a good video:

EDIT: I realized something else after I posted this — this is the earliest JRPG with a woman main character, and it may even be the first Famicom (console?) RPG, beating Metroid by 5 days.

I hope you enjoyed this little dip back into the early days of RPGs — back to 1994 next week.