Overall this stage isn’t too bad, but there are a couple of difficulties. The first one is that innate magic resistance does not exist in this game. So magic does the same damage to everyone unless you use the M Shield staff, or the permanent magic resistance item (one is in this stage). So unless you have these items, no one can really tank against magicians. However, they don’t do serious damage individually. 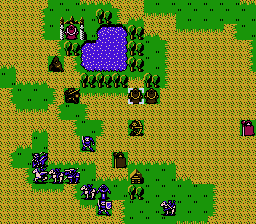 Garnef is at the right side of the stage, but as the helpful villager tells you, he cannot be defeated (according to the instruction manual we’ll take him out on stage 23). 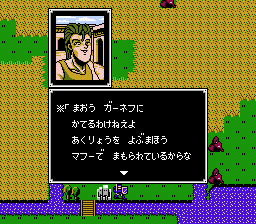 Garnef leaves after a few turns, and the mage reinforcements around him stop. The only other difficulty is that most classes move slowly on the desert. But that’s not a big deal, and the boss goes down fairly easily.

After the stage, Gato speaks to Marth through magic. He tells the story of Garnef and Miloa, who were once his disciplines. But Garnef stole the Mafu magic and now has the Falchion — he surely hopes to control the world himself, without relying on Drua. Our only chance to beat Garnef is to find the Orb of Light and bring it to Gato, and then we will get Starlight Explosion, the only magic that can beat Mafu.


Stage 16 – The Fight in Altia
“Marth takes back his country, Altia.”

This stage has a strange character, Chaney, who is the Commando class. I believe this class is only in FE1 and remakes. He can copy any other character, although he retains his own inventory and can’t gain xp while copying.

There’s really not too much to this stage. I just took my party south through the building with Chaney, and then around to the boss. There are villages at the top left to recruit either Samson or Alan (you have to choose one or the other), but Marth moves fast enough that I could send him off alone to do that and then catch up later.

Now Marth has taken back his kingdom, but he still has to clear the enemies out of the castle.

This was a tough stage. I had to reset more times on this stage than in the rest of the game combined. 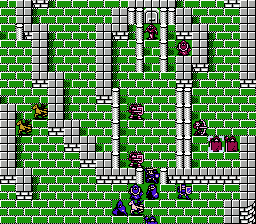 The left side of the map has a bunch of chests. The right side of the map has the boss, who cannot be hurt by magic. This leaves Dragon Killer swords the only really effective means of hurting him. The two priests on the right both hold important items (a Member Card and a Reserve staff, which heals all units for 10 HP). None of this would be terrible except that reinforcements begin to come out from the right of the priests on turn — three a turn for the next 40 turns.

The plan I eventually came up with was to warp Marth into the treasure room (you almost have to do this to avoid losing any chests to the thieves). Then part of my group would follow him, including Julian and Boa (who has the warp staff). Meanwhile Jeigan went to get a door key from the storage to open the door to the boss. After clearing out the enemies on the left side and getting most of the chests, I warped Marth next to the priests. He was able to then use his 11 move to mostly stay ahead of the reinforcements, get back around to the throne area, and receive a Dragon Killer sword from Astria. The other one I had went to promoted Kain, and they didn’t have much trouble taking down the boss.

The problems I had were mostly beating everyone on the left side without losing anyone. I had one time where I had done it but I lost a person from full HP to a critical hit. Another time I did everything right but hadn’t yet realized I needed Dragon Killers, and couldn’t kill the boss. Finally everything worked out and I moved on. I did not use the secret shop behind the throne.

So Marth has taken back his kingdom and castle. Unfortunately his sister Ellis is still with Garnef.

This is another stage removed from the SFC version. After 17, it’s a breeze. 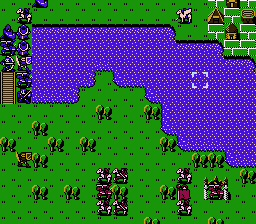 Except for one stupid loss when I just wasn’t paying enough attention, this was basically a matter of charging ahead and killing everything. I wanted to finish the stage before the reinforcements came out, but Est (a pegasus knight) joins here along with the Mercurius Sword, which is one of the best weapons for Marth. So I had to wait for her to catch up and face a couple of reinforcements but nothing too bad.

As people on the Discord told me, she’s the last pre-promote unit to join but has excellent growth to compensate. But I already have a lot of P Knights. After the battle, Modorf warns us about going to Laman Temple because there’s a fierce goddess that will kill anyone who takes anything from it, but Marth needs something from there.

This stage is fairly small and has few enemies (and no reinforcements, but there are some tricky aspects to it. 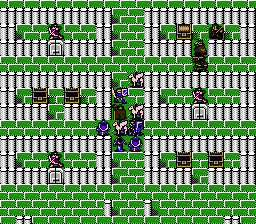 As you can see, the Snipers will interfere if you try to use thieves to open the doors, so they have to be beaten, or you can use some other hardier class with a Door Key. I did this for a few of them but then just killed the snipers after that. The important treasures in this stage are the Earth Orb, from one of the chests, and the Light Orb, which a thief holds. They play a mean trick by having another thief equipped with a Devil Sword. I wasn’t checking inventories and I got a nasty surprise and a reset. 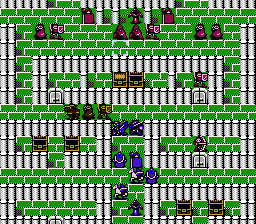 The boss of the stage is Chiki, who Banutu told us about earlier. He can convince her to join and break out of her mind-control spell, so there actually isn’t a boss to the stage.

Aftewards, Nina tells us that before going to Grunia, we should try to talk to General Camus. Camus was the one who protected her years ago when Drua attacked Akaneia, despite Medius wanting her dead. She hopes that by talking to Camus we can get him on our side. So that’s the next destination.