This is a long stage; tedious but not as hard as it looks like it might be at first. 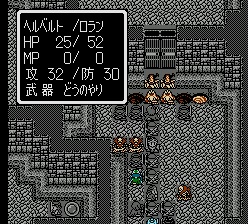 In order to open three gates, you have to leave a person on the buttons (the circle at the bottom left). This means that each gate you pass through, one of your bands has to stay behind. However, they can move such that they can help out a bit through walls (either with spells or bows). The majority of the enemies in the stage are weak skeletons, but there are a lot of monster lairs. One Japanese site was recommending level 15 for this but I didn’t have all that much trouble with it at the levels I had above. Once you know which band you’re leaving behind, you can use up all their MP resources (or save a bit for healing through walls). I left Hans, Orlof, and Rolan. If you leave Orlof second he can use his Fribanen spell on the bosses which helps a lot, especially if you leave MP for two castings.

Once you get through all the gates, you save the women you’re after! 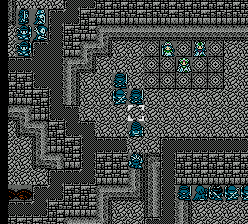 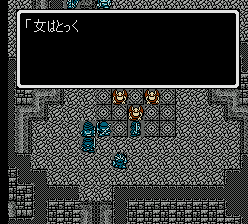 But no, they turn into monsters. Orlof was able to cast his Fribanen spell which does quite a bit of damage. They use the Marlo spell so they can do a fair amount of damage, and heal themselves. Even so, Orlof and his archers helped out quite a bit and Kurisu and his band were able to do the rest.

Actually not Battle 12 yet. I’m posting this early because I can’t get the next event to trigger. The gamefaqs walkthrough says:

“Go to the building left of the inn. Talk to everyone inside on every floor and leave. A pidgeon will come. Search it to find that Rolan and Orlof sent a letter, saying they’re OK. Go back in the building, talk to the guy at the counter and give him 100 gold to send a carrier pidgeon to them. Go down from the place and talk to Hans. Leave the town and go back in, and to the water fountain. Another pidgeon will come.”

I’ve talked to everyone in the town multiple times, left and entered over and over again, walked to all the fountains, talked to Hans, gone back to other towns. I even tried talking to everyone in Winga again, and I can’t get the second pigeon to come. The Japanese walkthrough only covers the battles, so I can’t figure out what I’m doing wrong. I’ll try again later but if anyone knows what to do, let me know.

[EDIT: Thank you to skyrunner14 in the comments below for pointing me to a Let’s Play. It turns out that you are not paying 100 gold to send the pigeon, but just to make the message for you. You then have to go back to the pigeon and use the message as an item to send it. I wasn’t paying careful enough attention to the dialogue.

I already started playing Illusion of Gaia for my other blog; it’s a short game so I’ll go ahead and finish that and then come back to Just Breed.]