The second part of this game takes place in China. According to the instruction manual the designers went to China for background research — or did they just want a free vacation? All the music changes to more Chinese-sounding music, your weapons all get taken, and your money gets replaced with Chinese money. There’s no explanation for how your characters can speak Chinese.

Our goal is to find Kunlun, the mythical mountain. Supposedly Yoshitsune is waiting there for us. I found the sequence somewhat disconnected — one of the flaws of this game is that it’s not always clear what you’re supposed to be doing next, either from a story or gameplay standpoint. This is especially a problem when you have to backtrack, because the backtracking is often based on something you heard 3 hours of gameplay ago that has no direct connection to where you are in the game now. I had to use a walkthrough quite a bit in this section just to learn where to go next; maybe if I had taken detailed notes on what everyone said I could have figured it out.

Since Kunlun is said to be at the source of the Yellow River, our first task is to find out how to go upstream. We start off in Lin’an, and our hope is that the Wokou pirates will help us out with a ship — they are Japanese, after all. After paying some money for the ship, Fudou goes aloneto an island, but the Spirit General Bukoku attacks and defeats her, and she wakes up in a village. A boy Byakuren joins our party; he wants to get to Kunlun to beg the gods to stop the war. He’s like Benkei in that he just pops up to attack during combat. He’s pretty useless.

Fudou quickly reunites with the party, but Tokoyo has been captured by Bukoku. We also hear that Kublai Khan is being used by the Spirit Generals in order to bring back the Demon Castle. After some fetch quests, the Wokou let us borrow Hou, a sea monster that can ride up the Yellow River.

This is where I feel like the progression starts taking too many detours. We have to awaken ghosts of dead soldiers to pass through an underground lava river, fight a flame dog boss, and then finally get to the castle where Bukoku is holding Tokoyo. Maybe if you’re more familiar with the Chinese mythology this all comes from it makes more sense.

This is a tough fight. One other big flaw in this game is the lack of good revive options. When enemies have group attack spells, it can be very difficult to resurrect a character and then heal them before they die again. Since enemies often randomly get multiple attacks and criticals, it’s easy to get screwed over by luck. I think the fact that I had to grind levels so much for Jugon (the boss of part 1) made it a bit easier, though.

At the top of the castle is Bukoku.

He’s much easier than Jugon. For the most part my boss strategy from this point on was the same — use strength buffs and heals, and forget about damage spells or Tokoyo’s sword techniques (which often do less than a regular attack). Depending on the boss, Stopspell can be useful as well as the defense buff or the “reflect magic” buff.

With Tokoyo back in the party we continued up to the capital city, although there’s nothing to do there at the moment. Instead we head to the Great Wall, where they’ve managed to decipher some old stones. One is yet undeciphered but somehow Meisa can read it — it’s in Kunlun language. Unfortunately Bukoku shows up again (they can’t die as long as the Demon Castle is around), and has one of his minions fight us.

Now we know where to go in order to get to Kunlun, but we still need a flute to open the way. So we continue up the Yellow River, and meet Chizam, the head of a Mongol troop. He seems suspicious of Kublai Khan’s actions. Finally we reach the end of the Yellow River (or at least what we can access) and have to go through a cave, where Bukoku once again challenges us…but by now he’s easy.

A detour brings us to Rakaku, one of Jugon’s servants from part 1, but he’s now become a priest. He challenges Fudou.

He uses a lot of debuffs and heals which is annoying — I had to try a few times and use a lot of the Shiki items to beat him. But he gives us a seal which will prove useful at the end of the game. Afterwards there’s a cave that has a map showing us exactly where to use the flute in order to gain access to Kunlun…which would be nice if we had the flute.

Continuing on, we meet the next one of the Spirit Generals, Jako. She(?) sends us back 1000 years to the Jama Taikoku, where Himiko tried to use the Mirror but ended up calling forth an evil power that would be around until someone went to Kunlun. Not sure why Jako wants us to know about this, but of course we manage to get back to the present. Jako meanwhile has killed Chizam and many of the mongol forces. Apparently they are indeed using Kublai Khan, and once Khan calls forth the Demon Castle they will kill him.

Back in the present we reach the final stage of the journey. Jako once again tries to kill us but Hou sacrifices his life to open the way.

With that, the last obstacle is gone and we recover the flute. With that we can go to the lake and open the path to Kunlun.

Kunlun is a magical place of happiness where the animals talk. It turns out that Meisa is actually the sister of the leader. We learn that Yoshitsune is no longer there — he and Genghis Khan were allied at first but were turned against each other by the Demon Castle and apparently killed each other (although later we learn that they defeated the Shikai Emperor so I don’t know exactly what happened here). Kosa, the leader, gives you the ring necessary to open the way to the Demon Castle and defeat the Shikai Emperor again.

Back on Earth, we go to the Capital, where the door is. Unfortunately Jako reappears and takes the ring. Byakuren is able to recover it, but Jako kills him.

Beyond the door is an underground cave where we meet the fourth and final General, named Sogyoku:

He’s somewhat annoying but if you use the Stopspell magic it limits his damage a lot. In this area is also a cameo from another Sunsoft game, Hebereke:

And then we can use the item Rakaku gave us earlier to go back to the Jama Taikoku and the final dungeon. Here we have to face all four of the Generals again, although fortunately there is a heal and save to go back to. Then it’s the final boss, the Shikai Emperor, who inhabits the body of Kublai Khan to fight us.

He has a ton of HP but his attacks aren’t as bad as some of the other generals. But just because it’s such a long battle, you can get screwed by unlucky hits. It was touch and go for me when I was desperately trying to bring people back to life and heal them, but eventually he went down. My final time was about 16 hours with this as my final levels: 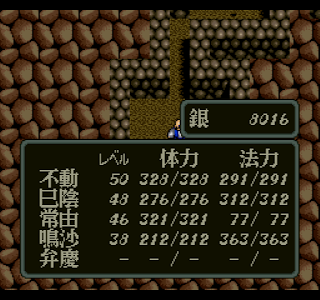 The ending is pretty short. With the Shikai Emperor dead, Kublai Khan also dies, and we escape the Demon Castle. Benkei has to sacrifice himself to let us go, but he promises he won’t die. 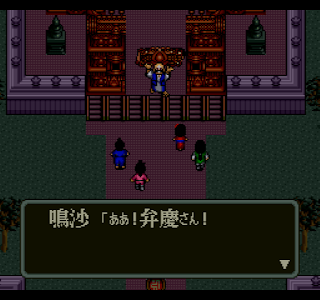 Kunlun goes away for another 1000 years, and Meisa makes the decision to come to Earth rather than staying in Kunlun. She lives in a village we visited earlier where someone mistook her for his lost daughter. The others go back to Japan and resume their lives, and never meet again. Fudou loses the “Suna lineage” powers and returns to her village to be a normal woman again.

Overall not a bad game, although not great either. Certainly just being average puts it ahead of most of the games I’ve played so far.