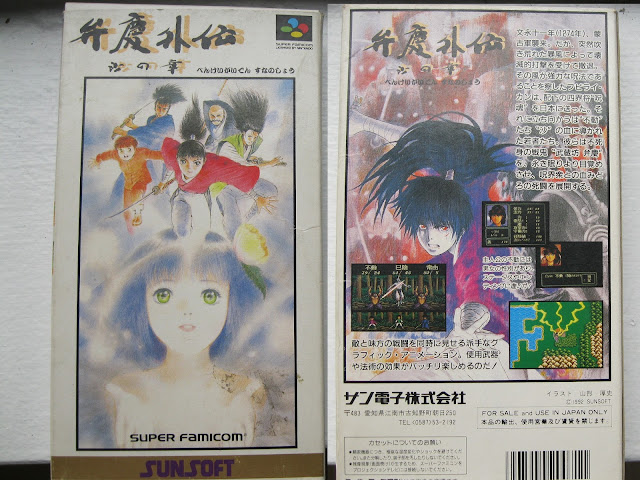 Sunsoft released Benkei Gaiden for the PC-Engine (Turbo Grafx 16) in 1989 and then followed up with this game in 1992. It’s not a remake or a direct sequel, but from what I saw on youtube of the first game, it seems to be very similar in gameplay.

The title is a reference to Musashibo Benkei, the famous warrior monk who served Yoshitsune during and after the Genpei Wars. However, this game takes place in 1274, 80 years after the death of Yoshitsune and Benkei. Kublai Khan has just attempted his first invasion of Japan, which was repelled by the “kamikaze” hurricane. Immediately Japan begins to prepare for his next invasion (which happened in 1281). There are various legends about Yoshitsune, claiming that he didn’t commit seppuku but instead escaped and lived in Hokkaido, or even that he went to China and became Genghis Khan. Someone in the game did mention this legend so maybe it will end up being part of the story.

According to the instruction manual, the kamikaze was called up by ancient magic, and once Genghis Khan realized this he sent one of his generals Jugon (呪魂) to Japan. The current shogun, Hojo Tokimune, has started to collect and send out his own magic uses to counter the Jugon and their spirit army.

The main character’s default name is Fudo, which you can change to anything and even draw your own kanji (or pictures) if you want. You can also choose between a male or female, which is the first game so far on this blog that lets you do that.

Fudo is training at the Shumon fort in Shikoku under the guidance of Saizo. She has the lineage of Suna. I’m not yet sure what this means — 沙 is just an alternate character for 砂, which means “sand.” As far as I know this isn’t a reference to anything in Japanese history or literature, and the game hasn’t explained it yet. Your other party members, Mikage and Tokoyo, also have special powers because of this Suna lineage.

As you can probably tell, this game is very Japanese themed. No Western loan words are used, even for things like the settings (instead of the usual “stereo” and “mono” for sound it’s 双 and 一). The one exception seems to be “level” for experience level. Perhaps this is why there’s no walkthrough up on GameFAQs: if you can’t read kanji at a pretty high level this is going to be a tough game to play.

The world map is based on Japan, and the towns you visit are actual towns roughly in their correct places.

The gameplay is standard RPG, with only a couple of unique aspects. The battles show your characters on the bottom with animations for their attacks (the damage is written in kanji instead of arabic numerals like usual).

The game begins in Shumon Fort. Lightning hits the town, and Fudo is called to a nearby tower, where she meets Rakan (someone serving under Jugon). She’s able to power up to level 50 and defeat him, but then returns to normal.

Shumon Fort is destroyed, and Fudo has to flee to Tosa village. There she meets up with Mikage and Tokoyo.

Saizo has also escaped to Tosa, but he’s dying. He tells us that we need to get to the capital (Heian/Kyoto) to meet the Emperor. This is probably Emperor Kameyama; he’ll abdicate this year in favor of the 7 year old Go-Uda. We need to make sure that the tower nearby is activated so that when Khan attacks again, Japan can call the kamikaze to defeat him. We’re also supposed to find five Spirit Rings, but the purpose of that is not clear yet.

In a nearby shrine, Fudo meets Jugon himself.

He wipes the floor with our heroes, but Saizo appears and sacrifices his life to save them. They wake up on the mainland, in Dewa Sanzan. In order to reach Kyoto we’ll have to go south through the Echigo pass, but they won’t let us go past without the Green Ring.

In the mountains Fudo receives a key to a dungeon which contains the ring. There we fight the first actual boss.

Fudo has a power of being able to use these “shikifu” items to call out various spirits. As she levels up she can use more of them at once, calling out different things. Using a few of these plus Tokoyo’s sword techniques made quick work of the boss, and I was on my way to Kyoto.

The random encounter rate is fairly high, but the battles go quickly. A lot of enemies flee, for some reason.

At the capital we learn that we have to find the Tensho Ryubu book to call forth the tower. This involves going to the Road to Yomi (Hades), and there are a few fetch quests necessary to open up the road. Once in there, there are a bunch of annoying enemies that cast instant death spells, but the dungeon’s not very long. Once we find the book, it’s time to go back to the capital to call forth the tower.

At the top of the Shuko Tower, we try to activate it, but Rakaku appears. He’s the brother of Rakan who Fudo killed in the opening sequence, and he’s back for revenge. Before we can actually fight him, though, a mysterious girl’s spirit appears. We’re knocked out of the tower and the tower is destroyed. Now what will we do against Khan? The only solution is to go see the Shogun in Kamakura.

In Kamakura, we find that the Shogun is with Meisa, the mysterious spirit girl that saved us in the tower. She came from China, but has lost her memories due to an accident on the boat. The Shogun wants us to go to the Kasumi Clan and get their help.

That’s where I am. This game doesn’t seem very long, and so far it’s not bad. There’s nothing about it that especially stands out, but I’m grateful just to be able to play an average game at this point.