I’ve been making slow progress on this game — it seems harder than the previous games.

Paola arrives, and I had her immediately take care of the thief and then sit on a base and deal with the Social Knight reinforcements while I sent Marth all the way around the side to get Julian in the top right town. Meanwhile I had Paola and Kachua fight the DKnights on the mountains with some gold lances. 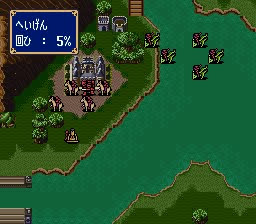 One oddity is that there are no axe users in this game so the town gives you a silver axe and just tells you to sell it.

After getting Julian, I used Warren’s gate key to open the drawbridge and then sent people at the other enemies from both sides. Machis can be convinced with Julian; fortunately he has a Javelin so he’ll often be attacking from 2 spaces and thus won’t get a counterattack. The boss is fairly easy to beat with Linda’s magic, and I made sure to get the hidden item with Julian around the castle before finishing the stage. 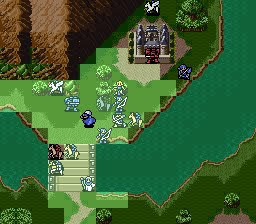 This stage basically divides into two parts and the enemies are mostly axe users. The main challenge is on the right; Ogma can immediately convince Sirius, who can hold off most of the enemies over there. Meanwhile I blocked the town with the kid mage. The thief has a Devil Sword, which is always a trap if you’re not careful. One odd thing about this game is that you only get items that are in the enemies’ inventory, not equipped. So there are many enemies in this game that have an equipped weapon, and then a second copy of it in the inventory so they can drop it when beaten. 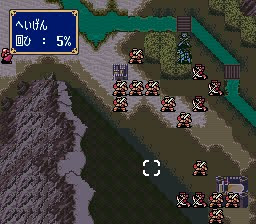 Sirius and Ogma can probably take out the enemies by themselves (using the kid mage to beat the boss); Marth can move quickly enough to get through the desert area but it may make more sense just to leave the rest of the party to the left, picking off the reinforcements if you feel like it. 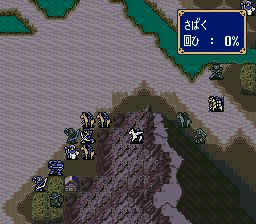 I had to reset a lot on this stage even though it seems rather simple. Marth has to run up to the top right to visit the town, but that requires drawing out all the Dragon Knights from the mountains and killing them — I kept making wrong moves and messing this part up. The thief is easily killed with a pegasus knight. 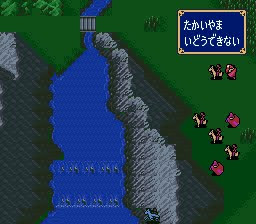 Once that’s done, the rest of the stage is not as bad, although I did have some difficulty at the bottom with the Social Knights that come. You can sit on fortresses so it’s not too bad. The boss is easily beaten with Armor Killer + magic. 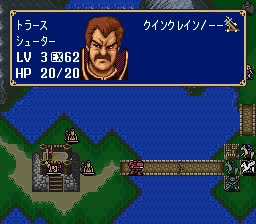 This is the first interior stage. I lost a few times until I tried a different strategy. Initially I was trying to head off the reinforcements at the bottom like this: 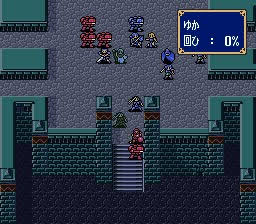 After a few losses instead I tried taking everyone up to the top right. 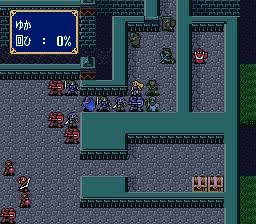 This worked much better. I used archers to take out the bishops behind the walls — the one with Worm is especially nasty, but the Libro guy sucks too. After I cleared out all the reinforcements and armor knights, Julian went down to get the chests, and then it was time for the boss. 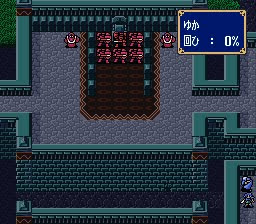 I forgot to get screenshots for this one. It’s an odd little stage — the main things to do are beat a whole bunch of thieves, and then get a dragon that comes out of a cave to the left. The dragon, even though it seems to be walking, does (maybe?) take a lot of damage from bows? Or maybe not. In any case he didn’t do enough damage to kill anyone in one turn so everyone could gang up on him.

Meanwhile you have Navarre and a new class, the Dancer, who can use her “cheer” command to give someone an extra turn. I lost a few times because the thieves attacked her and she died, but once I moved her in the right place the rest wasn’t bad. I ignored the rest of the enemies.

The boss does have a Thunder Sword so he’s not a total pushover, especially when mages with Elfire are coming from the west, but I manged it.

I have a bunch of promotion items now so I can finally upgrade some guys.