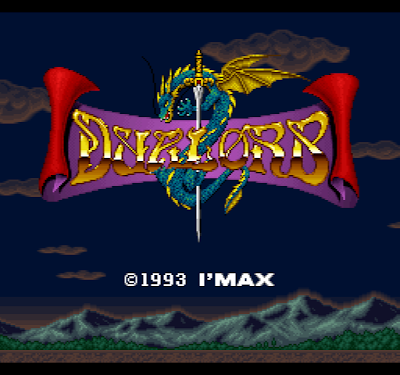 This game was not released in English, is not a port, and I haven’t played it before. Also there is no translation patch (apparently the hacking is very hard because of some issues with the text pointers). That means I have to play the game to the end. And it’s one of the worst I’ve played so far — probably down with Light Fantasy, Cyber Knight, and Fist of the North Star 5. It really comes down to one thing: game balance. There are too many random encounters, the monsters are too strong, and give too little XP and gold. This game has the worst balance problems of any game I’ve played up to now, except perhaps for Romancing SaGa. Nothing else in the game — the story, characters, etc. do anything to lift this game from the shit heap.

So according to my rules, the first week I have to play with no emulator tricks, and minimal walkthrough use. That will be this post, then I will move to Snes9X so at least I can do a fast speedup (I can only get about 2x speed with higan, with snes9X on this game at least I get 18x speed)

The opening tells you that this is a world of fairies, dragons, talking animals, etc, although the dragons are only in myth, and everyone is scared of them. Our hero is Ralph.

What a pathetic looking hero, with a pathetic name. I know that Western names don’t have the same resonance to us that they do to Japanese people, just like a Westerner might not realize that “Nakamura Taro” is basically “John Smith” in Japan. But Ralph?

Anyway. Ralph has to finish his training with Aleitos by going to the nearby holy mountain. There, he hears a voice from a great warrior, telling him that he needs to seal holy orbs to beat Pange. It turns out Ralph’s father also went out adventuring 15 years ago and never came back.

The combat system is basic AMID.

Fortunately there is an autobattle, although exiting it seems difficult — sometimes I can get it to stop, sometimes I can’t. The main difference with this system is that you first select the character’s actions (by going to the bottom part of the screen, then the picture will switch to whatever they’re doing, and then go to “attack”. As others have pointed out, this is a pointless change that is hard to get used to. The shops are also odd — you first pick out everything you want, then go pay for it at a separate counter. I guess they were trying to make it feel different, but why don’t you spend time making parts different that actually matter?

The first part of the game is not so bad. The first task is to find the other 3 party members who have the same mission as you. A starter dungeon has Ralph’s father’s short sword and some other good equipment in there, so that’s the first destination.

The random encounter rate is high, but healing herbs are cheap so I bought 20 or so and was able to get through without too many problems. Next up is a place where goblins have stolen all the children. After getting the second party member, Tio (a healer), it’s time for the Goblin cave. This dungeon also is not too bad — the 30 HP healing herbs quickly become too weak, but at this point in the game they’re cheap enough that it provides an easy source of healing. Tio, as usual for bad games like this, has MP that are way too low. But he has a good attack.

After beating the goblin boss and rescuing the children, the third party member, Liz, joins.

Liz is another fighter, but not as useful as Ralph because she can’t equip very strong armor. Next up is a village of fairies, who don’t like humans because one stole their fairy key. Of course we offer to go find it, and once we do, the fairies now are OK with us, and one of the fairies joins as the 4th and final party member. Lumies is a magic user, and virtually useless. Her attacks do 1 damage for the most part, and MP is so limited in the game and the random encounter rate so high that it’s basically impossible for her to use spells.

Now the enemy force destroys one of the towns you were at, but this opens up a tower that was in there. It hides a necklace that the mayor in another town will trade for a ship. Then, an enemy general named Golin takes over the large town of the land and there’s a barrier around it. Ralph learns that this barrier went up 2000 years ago and that the Light of Lazes was used to break it down. By finding three pieces of the hero Saladin’s equipment, the people who guard his grave will give us the Light.

This is where the game goes off the rails. The three dungeons with the Saladin equipment can be done in any order, but they’re all difficult. The monsters here do anywhere from 1/3 – 2/3 of your HP with one hit, and many have multi-hit spells. If you get unlucky someone can be killed from full HP. Revive items are too expensive to regularly use. The dungeons are also large and have lots of encounters.

The only saving grace here is that you can buy Sun Shards for 150 g that eliminate random encounters. So I just did some grinding to buy better equipment (which doesn’t help much), 99 heal herbs, and as many Sun Shards as I could. Using these I was basically able to blitz all the dungeons and recover the Saladin equipment without too many encounters. None of these dungeons have bosses, which makes that possible.

At this point I had reached the first week point, so now I can use walkthroughs and snes9x. Apparently the next boss inside the barrier is very difficult and the site I found recommends level 17-18 (I’m at 14 right now). The first thing I did was go back to the previous dungeons and get any stat up items I missed, as well as the rare revive items and MP+ items. By the time I did that I was at level 16. The enemies inside the barrier give a fair amount of XP so I’m hoping I can grind to 17 or 18 quickly with the speedup key. One other concern is that once I beat this boss, I will never be able to buy any Sun Shards or revive items for the rest of the game. I have 99 sun shards but I want to buy as many Life Winds (revive) as I can before this point. Yet another example of annoying, pointless game design.