This is quite a long game, but I hope I can have it finished by next week.

One other system I failed to mention last time is the “popularity”. As you progress through the game you gain popularity, but you can also lose it by letting your comrades die in battle and making wrong choices. If you get over 80 you get discounts and over 90 or 100 you start getting other good things — I can’t keep it much above 80 though because it goes down 1-3 any time your guys hit 0 HP.

Last time I had just managed to wake up Netarou, who moves and lets me pass the bridge. Ajase, one of the sons of Basara, is growing increasingly suspicious of Karla and tries to fight Momotarou, but leaves seeing how honest his fighting is. 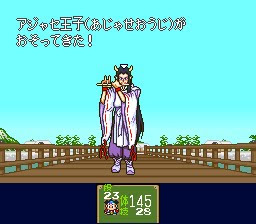 Now we progress to the odd Smile Village, which has an area with a lot of bizarre monsters. 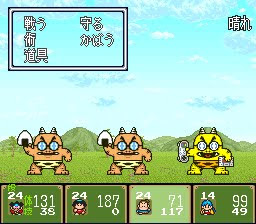 They’re worth a lot of XP but do strange things like ask you quizzes, feed you onigiri, and such. There is one good encounter, though — a friend that makes you invincible for a short time. Normally this wears off quickly enough that you can only fight one or at most 2 battles. But, if you use the Demon Flute you can repeatedly call encounters without moving and level up easily. You can also go anywhere else on the map with Momotarou’s warp spell.

Smile village has a strange singer menacing the town, but he goes down easily.

Next up is Hope Village, which is all in darkness which requires you to solve some puzzles to get access to the central tower, and then fight Ashura. 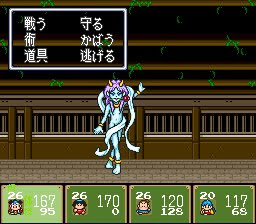 He’ll join the party afterwards. Now Hope Town opens up; it’s a huge town with a lot of shops. There’s also a lot of slowdown; I recommend bsnes’ overclock option to deal with that. There’s also a secret woman’s bath which lowers your popularity but gives you a special picture that I guess is a standby of this series. 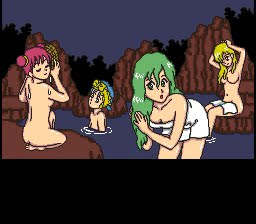 Now a castle gets built for Momotarou very quickly, which becomes sort of a base to hold all your extra characters. But soon, we meet the Wind God: 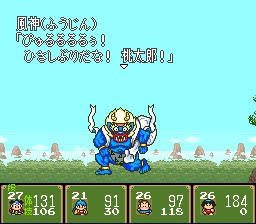 He blows away all the characters, leaving me with just Momotarou. Kintarou can be recovered pretty quickly, but the rest take a while. It’s actually better to switch around your party so Urashima isn’t there because losing his healing for a long time hurts. I found the best party member to replace him is Mashira, that singing dude that fought us earlier. 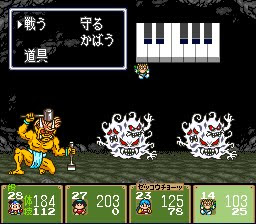 His attack has the keyboard, and he can do various moves by playing songs. I don’t know how you’re supposed to figure these out without a walkthrough, but for me the most useful are:

Next the party proceeds to the cold north, where Yasha Hime is injured. Healing her (with Ashura’s help) requires an item from a cave. 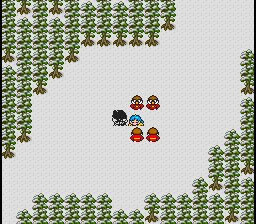 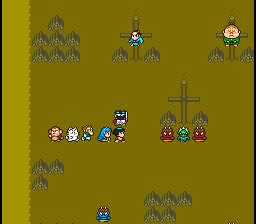 Karla sends us on a quest to recover some item for him, but partway through Ajase appears and agrees to help us, and we head back to recover our party members. After some fighting, Karla just burns the city down and then sends Wind and Thunder God ahead to put poison rain all over the land. 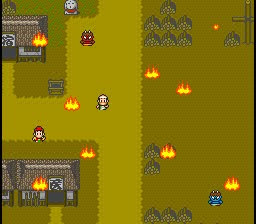 Chasing them on, we arrive at Sarugani Town. 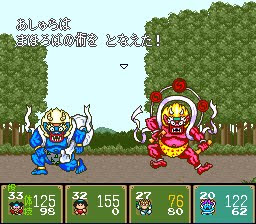 This is a difficult fight. Ashura can get a duplicate of himself out so that you can heal twice, and then if Mashira copies the attack power he will be a decent fighter. Once Thunder God is down it’s much easier. After this, Wind and Thunder God decide that Momotarou is right and join the party. Meanwhile Karla continues to lie to Basara to trick him into to continuing his fight against the human world. We also get a ship here.

I still have 6 of the moon crystal parts to get. I got the third by getting a strange monster on my team and then going to a town with a bunch of other strange monsters. After this I went to the Mechanical Village and upgraded the castle so it can fly, and also dive in the water. 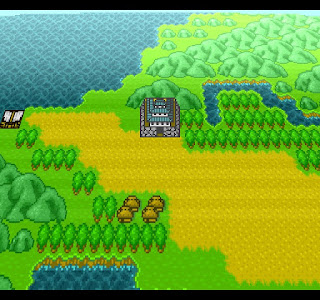 That’s it for this update — time to go seek out more of the moon crystals.