At the end of the last session, I had faced Tensai but it was clear that we could not win in our current state. So Rock sets off to find some magic users and weapon crafters who can help, starting with a weapon crafter Shingoro. Unfortunately his lover Oshichi is missing, but we’re willing to find her in exchange for Shingoro’s help. Eventually we do find her, but the enemy catches up with us and tries to bring down a bridge in the lava. 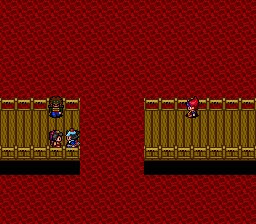 Shingoro and Oshichi both sacrifice themselves to save us, adding more to the body count. But, around the same time we determine that Benkei is still alive, and we can save him by going into his sword and defeating Doman. 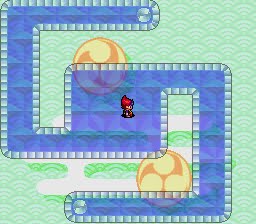 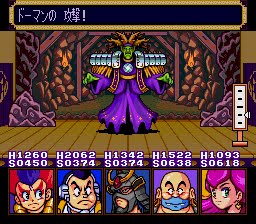 Chasing Doman out of the sword and rescuing Benkei is fine, but then we have to go to a devil mountain to beat Doman, and he’s quite difficult. I had to grind about 6-7 levels to beat him — fortunately grinding is fairly quick in this game, and being able to use Kiyosuke’s haunt power to increase the stats helped a lot. Once I was high enough level I used the buff spells and constant healing and it was enough to take him down.

Unfortunately this is followed by Hokaibo having to sacrifice himself to save us, meaning yet another party member lost (and the one with the buff spells!) Fortunately, it turns out that Shingoro survived, and he joins the party.

Now we have to go to the frozen land of  Ezo and free them from Kiyohime. This requires going to a side dungeon to recover an item that will help us beat her. 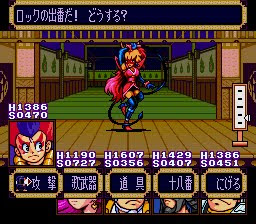 She has a devastating attack, but it will be blocked for a while by the item — this eventually runs out though, and lacking the buff spells it was a tough fight, and I barely managed to beat her.
Next up we go to Mutsu to find out about someone who can supposedly call back dead spirits. This is the final party member Itako. Once we prove our worth to her, she joins. Her main benefit is the buff spells. She can also bring back the dead party members and attach them to the characters (sort of like Kiyosuke), but I found these were weaker than the monsters Kiyosuke could bring. You can also switch to the actual character once they are attached, but I didn’t find this helpful either.
Also around this point all the karaoke boxes get closed down, so you can’t learn any more magic. I don’t know if there’s some sidequest I could have done to reopen them, but I found this fairly annoying because it basically eliminated the magic. For Rock you can create songs using this: 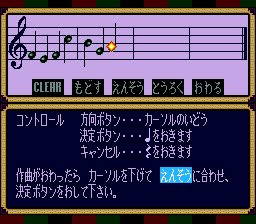 I never found anything in game to suggest how you’re supposed to know which songs to use; obviously it’s impossible to get these just by random guessing. In any case they’re just for Rock so they’re not overly useful.
Meanwhile Kiyosuke leaves the party because he’s intimidated by Itako, and goes to Osore-yama to train up more. To chase him down we have to face Doman again, but rather than a boss fight, Itako and Kiyosuke just team up to destroy him, and we’ve got Kiyosuke back.
Now we have one obstacle remaining on our quest to reach O-Edo to finally beat Tensai. This boss: 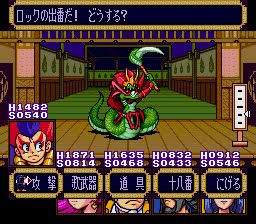 The remaining bosses basically have the same strategy. Macky can heal, and she can do a “chorus” with Rock to fully heal everyone at the cost of 30 mp for both of them. Itako buffs, and everyone else attacks.

Now there’s a silly part on our way to Oedo, where our ship transforms into a mech for a boss fight. 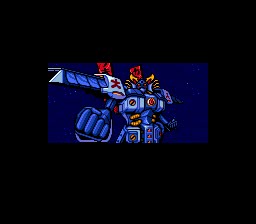 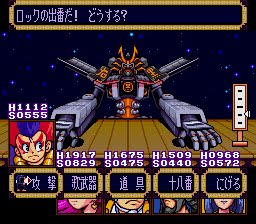 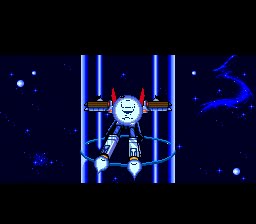 And finally we reach the last land. Oedo is a big city surrounding the final dungeon, and after buying some supplies I went in. 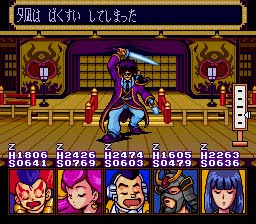 And got my butt kicked. This guy sucks — as you can see, he’s like the early game boss where he puts all your guys to sleep. They don’t wake up when hit, so this often just means hitting A until you get a game over. I left to level and buy the best equipment I could along with stat healing items, but even then I could barely touch him before he just killed everyone. The only way I found to beat him was to use items that cancel spellcasting for everyone. This is rough because it’s hard to heal and you don’t get any buffs. But with enough levels and using some healing items I was able to do this eventually.

The final boss is much easier. 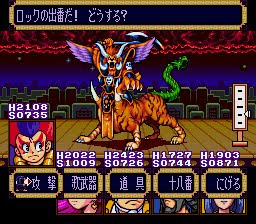 He has several forms, and the last form has very high defense. I just had Itako keep casting the strength buff on Benkei (it stacks) until he was doing 2000+ damage every hit, and with that plus the full heal and some occasional revives or anti petrify, he went down.

There’s a lot of plot stuff I didn’t touch on, so I hope if a romhacking group ever takes this game on it can still be enjoyable. Like I said in the last post, it’s no masterpiece. But it’s very playable, not very long, and has a fun sense of humor. I wish they had fleshed out the spell casting a bit more and made it a little more thematic with the music — they tried to do something with Rock’s ability to make spells himself through songs; I wish they had made this a bigger part of the game.

But it’s nice to finally be able to recommend a game!

Next up is First Queen, a strange game that seems to have elements of SRPGs and real-time strategy in addition to RPG.