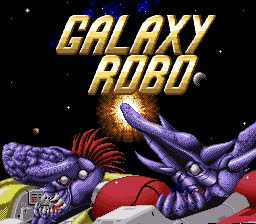 This is a rewind in time; I missed this game on my first pass through 1994 but Manny Rhyde on the SRPG Discord pointed it out to me. It has a fan translation. It’s been described as “Fire Emblem in space” but it’s not as close to Fire Emblem as you might think. 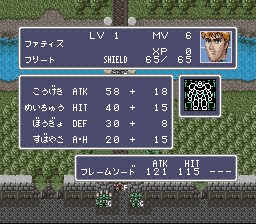 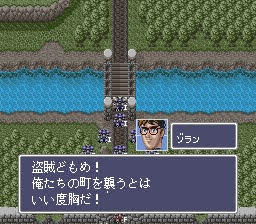 The defining feature of the game is the size of the battles; after the first couple, you’re typically about 30 vs. 40-50. The stages will have some named characters that can level up, and then a bunch of other grunt units that are weaker and cannot level.

The story begins with Fatis, whose childhood friend is captured by an attacking empire. He goes out with an old mech, one of the three ancient mechs that’s more powerful than the other ones they make now. The story as a whole is a pretty typical “defeat the evil Empire” story — it’s nothing special, but it’s fine for 1994. 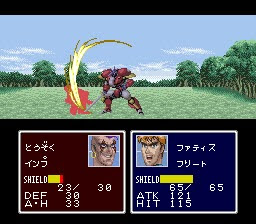 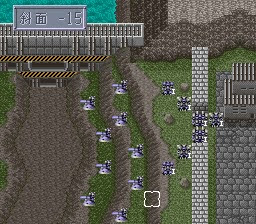 The characters are fixed to a certain mech, and when they level up they gain stats. They don’t learn any new powers or get any new mechs. There are about 5-6 different types you can have, and each one has one or two attacks. Some can repair, and there are several battleship type units as well.

This seems to be a rather obscure game even in Japan — the shutdown of Geocities wiped out a lot of old sites, but at least in what survives I was not able to find anything about the game except for a few short reviews. No full playthroughs on Youtube or Nicovideo. I’ll just make a few notes about the stages; I didn’t take careful notes at first but the first few stages are not that bad. I was always unsure about how much to use the grunts, but the enemies are evenly matched enough with your guys that I think it would be quite difficult (and unnecessary) to try to use only your named characters. Could be an interesting challenge. 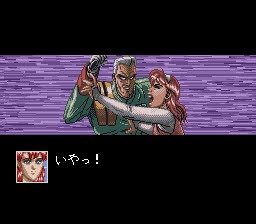 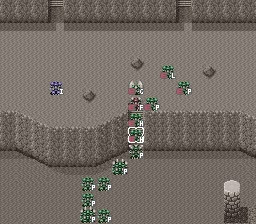 Stage 7 (or maybe 6) is a defense mission — you have to last for quite a few turns with an army that is much stronger than yours. I lost the first time because there are a few people that can’t die or you get a game over. You never get any units that can just sit and tank; I found that at any point in the game, 1 vs 4 or 5 meant a decent chance of the 1 dying even if it was my strongest guy vs. 5 grunts.

Stage 8 has a rather annoying issue that’s in a few stage. There’s an enemy, Kyarana, where the final blow can only be done by the main character. Other units can get her down to 1 HP but then further attacks will have no effect. I had sent the main character all the way opposite on the map, and so I had to waste many turns fixing that. There are other stages where named enemy units cannot be defeated during the stage; they can be taken down to 1 HP but you just have to beat all the other units and then they’ll escape. But of course they can stay on the map wailing on your guys.

On Stage 9 I got a freeze that seemed to be inescapable; no matter how I tried to move people differently, it would always freeze when I attacked a particular enemy. Fortunately restarting the stage (and maybe moving to the BSNES MT emulator) helped and I didn’t have any freezes after that.

In Stage 10 we go up into space. The space levels are basically the same as the ground levels, with space debris serving as the defense spaces. You also get your team splitting up and not reforming completely until the end of the game.

In Stage 14 you have to defend a base; this mostly just involves going out and attack the enemies, but missiles appear from the left and right. The grunts I left behind were able to beat them although they missed a lot.

Stage 15 involves you choosing who comes along with one of the characters to go on a secret mission; the way they set it up is confusing; what’s actually happening is that you are choosing who will stay behind to fight on stages 16-17. This wasn’t very clear, though, and I took everyone possible on stage 15. This left 16 and 17 more difficult. I actually lost 16 the first time but you can draw some units into the gas cloud and blow it up, which helps. On 17 you just have to survive for a while and then the rest of the units will reappear.

Stage 18 is very slow because the ground costs a lot of movement points and there are lasers that automatically shoot you on the enemy phase if you stop in their line of fire. But it’s not all that hard.

Stage 19, the last one, is hard. It’s 4 of your guys vs. 4-5 boss-class enemies, and if any of your guys dies it’s game over. I had to do a lot of saving and resetting here just to wait for the enemies to miss. Maybe I was underlevelled but since you can’t repeat stages it’s not hard for that to happen.

Overall this is a decent game. It’s a bit simplistic and I definitely would not play this without an emulator speedup key since the enemy turns take a long time (I used it for all the unskippable battle sequences).