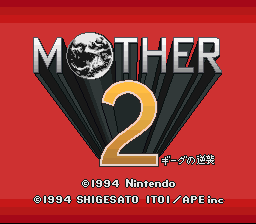 This is the second game in the Mother series, which began on the Famicom in 1989, continued with this game, and concluded with Mother 3 for the GBA in 2006. The designer has said he has no plans to make any more games. The games do not share plots or characters, just a similar feeling. They are all set in a contemporary-seeming world (though not actually Earth) and star kids with psychic powers fighting against strange monsters and animated objects. There are parts that intentionally parody Dragon Quest, and silly aspects.

Mother 2 is the only game that was licensed in the US (as EarthBound). I remember the hype around it in Nintendo Power and the scratch and sniff inserts that had burp and fart smells. I never played it; by 1995 I had lost interest in console RPGs and was playing computer RPGs like Might and Magic and Ultima.

The first thing you do is gave everyone names. I went with all the default stuff except Kurisu for the main character (later you have to name the player as well, though.) 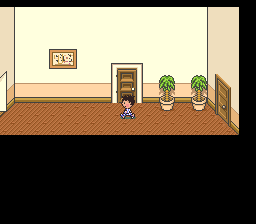 A meteor lands near Kurisu’s house in Onett, and he decides to go see what’s up. After some wrangling he takes a bat and heads off. 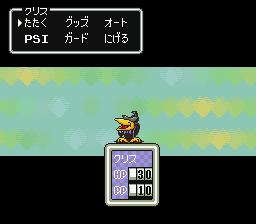 The monsters are visible on the map, which is nice. They tend to head for you. Each monster actually represents a single enemy, but if other enemies are close by when you get into a fight they will join up. You can also get attacked from behind, although it’s relatively easy to avoid this. Another nice feature is that if you level up enough, enemies will run away from you, and if you do fight them you’ll automatically win (although even fleeing enemies might not be automatic wins).

The battle system is standard DQ2. The “PP” are psychic power points used for the psychic abilities. One interesting quirk is that the HP are displayed on a rotating dial, and so when you take damage it takes a few seconds for it to count down. If you end the battle the HP will stop counting down, and if you heal, it heals from the current spot on the dial (and stops it from going down further). So if you are fast you can heal someone who has taken lethal damage.

Anyway, Kurisu goes with some neighborhood bully/friends to the meteorite place. 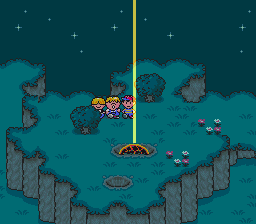 There he learns from a little bee who has come from 10 years in the future that a chosen boy and three friends will defeat Gyiyg through wisdom, friendship, and courage. But back at the bully’s house his mom kills the bee, who in his dying moments says that you need to find eight places that are “Your Sanctuary” locations. A Sound Stone will record the sounds in each place. The first one is actually in Onett, the Giant Step. So that’s our first goal.

The most important thing in the game is the telephone. When you call your dad, he deposits money in your bank account and lets you save the game. This is basically in lieu of getting money from monsters but it’s nice because when you game over you only lose half of the money you’re carrying. ATMs are conveniently located all over the place. You can also call your mom to get rid of homesickness, and later order pizza or call an item storage place.

I found the inventory limitation annoying, especially since it tends to get filled with key items and items that might be useful in specific situations but are hard to justify keeping because of how few items you can carry. In general I do not like limited inventories, and for me it’s always a negative when managing inventory space is a constant element of the gameplay. 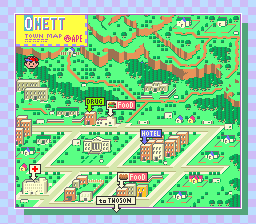 The first goal is the Giant Step in Onett. The beginning part of the game shows a common problem in RPGs of this era; since Kurisu is all by himself you basically just have to level up a bunch to have a chance to beat the early bosses. We have to take down a gang leader in the town, and then the mayor gives Kurisu a key to a cabin that leads to a cave that leads to Giant Step. 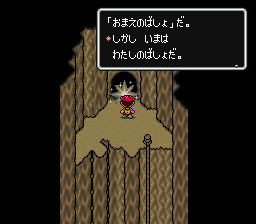 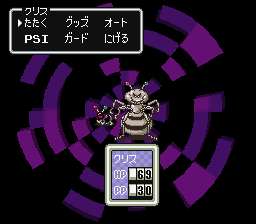 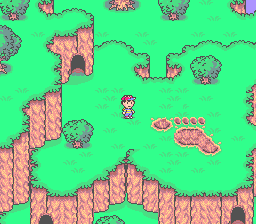 Every “Your Sanctuary” place is guarded by a boss that appears as a star of light. The boss here is a big ant, but once he’s beaten the giant step is beyond the cave. The Stone of Sound records the sound and that’s 1 out of 8!

Now Kurisu has to beat up a bunch of policemen to be allowed to go to the next town — a lot of stuff was censored when this was brought over as Earthbound but somehow in 1995 Nintendo didn’t think this was a big deal. Maybe because it’s framed as them testing you to make sure you’re strong enough to go on.

The next place is Twoson, where we beat up yet another crime-related figure. 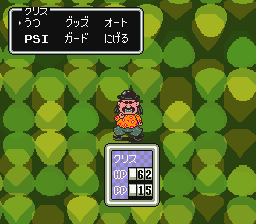 In Twoson we meet the scientists Apple Kid and Orange Kid, who make various devices throughout the game. We also learn about Paula, the second character. She’s been captured by some kind of blue hooded figures from Happy Happy Valley, who will use her as a human sacrifice. Apparently the cultists were changed in the English version to look less like the KKK. 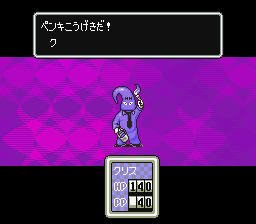 The Kids give you an Octopus Erasing device (which was changed to a pencil eraser in the English version). 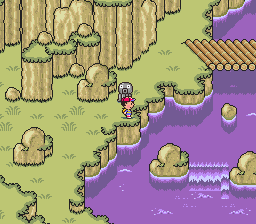 Paula is trapped in Happy Happy village, but she gives me a Franklin Badge to survive the electrocution of the leader. 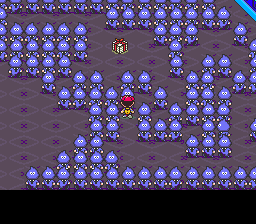 Once I managed to beat Mr. Franklin, the cultists all go back to normal, Happy Happy Valley is freed, and Paula joins. She has a lot of attack moves (including the PK Fire from Smash Brothers). She can also use a “pray” technique that I always forgot about but can recover PP and HP when she uses it. Now we can also proceed to the second Sanctuary, the Lilliputian Steps, after beating the mole boss. 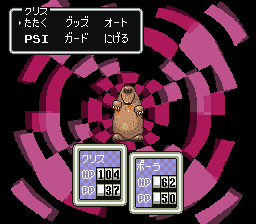 Now we need to go to the next town, but the tunnel leading there is inhabited by ghosts. The ghosts are scared away by cars, but how do we get a car? We have to release the Tonzura Brothers from their debt to the night club owner. These guys had their designs changed in Earthbound, possibly to avoid having them look like the Blues Brothers. 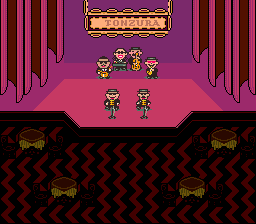 The dude from earlier gives us a big wad of bills and runs off to find himself, and so we can use those bills to free the Brothers, and have them take us to Threed (which is Threek in the JP version — the Legends of Localization writer wonders if they change this to avoid 3 K = KKK?)

As we might have guessed from the ghost tunnels, this place is overrun by zombies. And we quickly get captured by them, switching the action to our third character Jeff. He’s at a boarding school of some kind and is the son of Dr. Andonuts (“an” here is the red bean paste, this is a donut hole with the red bean paste in it). Paula has called out to Jeff in his dreams, and he sets out to save us. 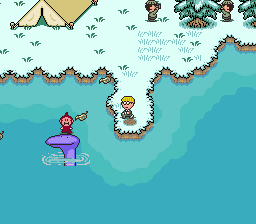 Jeff has no PP so cannot use psychic powers. His ability is to use various items and fix broken things you find — I never really found out how to make good use of him and he was by far my weakest and most useless character. 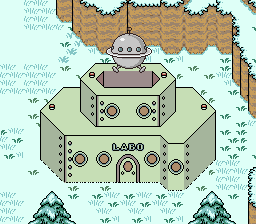 Jeff’s dad has a UFO that takes him to Threek, and crashes into the place where Kurisu and Paula are trapped, freeing them. Now we have three out of the four party members! After beating a zombie tent and getting “fly honey”, Apple Kid gives us Zombie Paper to lure all the Zombies out, and we can then proceed to Saturn Valley. 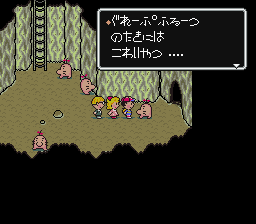 The things in the Saturn Valley look strange and have a strange way of talking. Some of them have also been enslaved in the Belch Factory, where we go next. The boss of this part is disgusting and I actually turned the sound off because I really got tired of the burp sound effects while fighting him (I somehow don’t have a picture). But the Fly Honey distracts him and he’s not all that hard. There’s a nice hot spring afterwards to cleanse all the yuck away, and the third Sanctuary is nearby.

The zombies are also gone from Threek so we’ve saved another town. Off to the desert! A traffic jam ensures we have to walk. 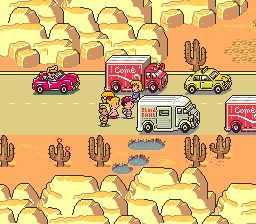 The desert itself has some archeological digs and such. This part involves switching back and forth between the Desert and the large city of Fourside. There, somehow Pocky (my bully neighbor) has become rich and lives in a huge tower. Also the Tonzura Brothers have been put in debt again — idiots. But we can free them from their debt (again) by clearing the monsters out of a desert mine and receiving a diamond in return.
Now it’s time to deal with the rich man Montoli (and Pocky). He’s getting his riches and power from this evil statue on the Moonside of town, a strange alternate dimension with unusual monsters and where it’s Opposite Day. 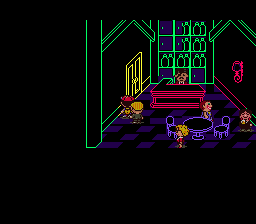 We beat a devil statue inside the dimension, and Fourside is back to normal. The strange collector near Kurisu’s house in Onett had the same statue but I never went back to see if his dialogue changes or if there’s anything you can do there. Anyway, Montoli is grateful that we freed him from the evil statue and lends us his helicopter to go to Summers, the next town….but Pocky steals it instead. So now we need Dr. Andonuts help, and it’s back to Winters again. Jeff is able to fix the UFO he rode to Threek before, and go back to Andonuts. While Andonuts makes a flying machine to get us to Summers, we can investigate the fourth Sanctuary. 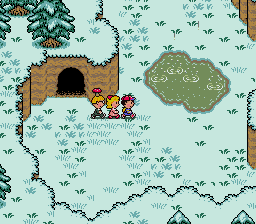 That’s about the halfway point of the game so I’ll end here. I’m already finished with the game but I’ll do the second post next week so that I won’t skip too many weeks from playing Sangokushi Eiketsuden on the other blog, which looks like it could be a somewhat long game.

This is the 4th anniversary of this blog; it’s hard to believe I’ve been doing it for this long. Thank you all for reading and commenting!