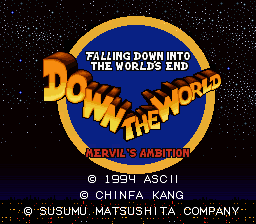 As I said in my previous post, I swapped the order of Down the World and Wizap because I couldn’t figure out how to play Wizap — I tried to order a copy from Japan but covid is still messing up the mail so I can’t get it. However, I think I have found enough resources that I should be able to play it (it’s a very short game if you know what to do).

As it happens, Down the World is by the same company as Wizap. ASCII is also known for Itadaki Street, the RPG Tsukuuru (and other Tsukuuru series), and seems to have developed a number of late SNES RPGs like Milandra, Solid Runner, and Dark Law. The strange title of this game is a reference to traveling between worlds in the game, where you go “down” a door or teleporter and fall into the next world. 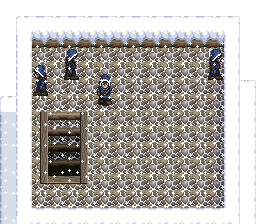 One surprising thing on starting the game is a vocal song in the intro! I didn’t know any other games besides Tales of Phantasia had done this, and it’s impressive to see it 2 years before ToP. It’s not as long as the ToP one but it’s still interesting. If you want to hear it, there are several videos of it on youtube. The song plays while the fairy-tale like background is introduced.

Princess Sara, the creator of life, has been pierced with a small thorn, causing her to become sick and cry. If she cries all of her tears, the world will be destroyed. She created ten heroes from ten of her tears, called the Blue Tear Knights. This was King Mamran’s plan, but Mervil opposed it and has created lots of monsters to go out in the world. The first 9 knights all died, and the 10th knight, a weak, cowardly knight named Gao, is all that’s left. Sara has only 3 tears left — when all those are gone, the world ends.

So the game starts with Gao setting out to find the Hero who will help them, along with the fairy Belbel to help. She can use her wings to revive Gao if he falls in battle, but only 6 times (you can get items to restore the wings). It’s an odd start because Gao starts walking around, talking to people, and going into a dungeon and fighting monsters, but you have no control over any of it. Finally he reaches a town that’s supposed to have the Golden Ship that will call forth the hero. Still no control. Finally he climbs up a ferris wheel and the golden ship descends, along with the hero…that turns out to be the player. 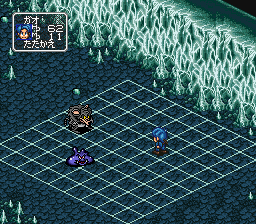 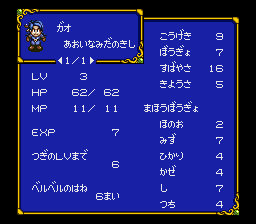 Gao turns to the plyer and asks your name, and then says you can use the strange device in your hand to tell him what to do. And now you have control as Gao goes “down the world” to the first world.

However, the battle system is still semi-auto. You give your characters a general tactic and watch them fight on a grid. The tactics are customizable and you can even make your own pattern and save it (with a name). However, I never found this necessary — mostly the ones they provide you with are good enough maybe with small tweaks. Ultimately I think these efforts at making auto-battle systems like Elfaria and this game fail. In theory it shouldn’t be much different from the RPGs of this era where you’re mostly just mashing attack over and over again. But at least there you can stop and heal or run away. It’s a shame because I think this would have been a really enjoyable system if they let you control Gao and have everyone else on AI. As it is, you spend most of the time just watching, and directing heal spells. 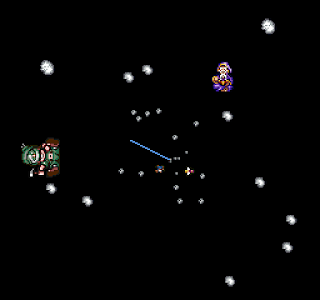 The characters will use heal spells automatically, but this doesn’t happen until the people are fairly low on HP, so I often had to heal manually.

There’s also an interesting system where by pressing X, you can direct Gao to go back to places you’ve been. This is not a teleport spell but he will actually walk there. The system is impressive because you can direct him to go from the depths of a dungeon all the way to a specific shop in a town. You’ll still have random encounters but the pathfinding is good so I guess it saves some time. You can also ask him to go a specific direction or follow walls, but I never used this.

Gau’s first world is the rock area, where people are obsessed with gems. Here, Gau learns that Mervil was one of eight sages, and turned the other ones into animals when he decided on his ambitious plan. Most of them don’t seem to care about what’s going on, but the last one, Bararaata, decides to join the group. Soon after, the smith Joshua joins up, bringing out team to three. After that, we head to the Jawald Temple to find the door to the next world, Flowerlandia. 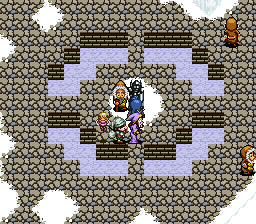 It seems that Flowerlandia is actually Snowlandia, though, as the entire place is covered in feet of snow. It turns out that this is caused by the dragon Girin. As it turns out, this is also where Gao originally came from — the base of the Blue Tear Knights is here. His mentor powers up the sword but then they all disappear, after reassuring Gao that Sara made him a Blue Tear Knight for a real purpose despite his weakness.

The basic goal of this section is to find the Flame of Desire that will deal with Girin, and also get a sled to get to his mountain. The flame is held by a dancer Kirara no Kyoka, and we are also joined here by the knight Gacha. Once Girin is defeated, the land returns to spring and we go Down the World to the next place. 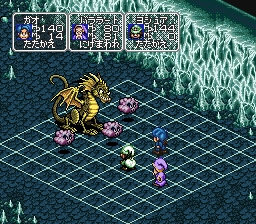 The next land has a Wind area and a Fire area. We need to get through to the Fire area in order to proceed to the next world, but it’s been blocked off. The King of the wind area has become a coward and stopped fighting against the Fire area, which wants to take it over. We add a new party member here, a Blood Knight that was created from Princess Sara’s blood. There’s also Bone Knights created from her bones, which doesn’t leave much left for her.

Eventually we manage to get a flag that can put out the fire, reach the Fire area and defeat the boss Gadarl, who is working for Mervil. Once we beat him, Mervil’s voice comes out and tells us to stop trying to save Sara — we should just let this world end so a better one can be reborn. Obviously this is not what we’re going to do, so it’s on to the next world. 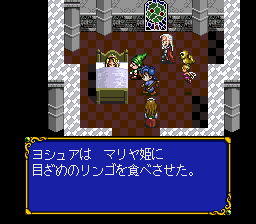 In this world, we need to save three sisters who will combine their powers to let us progress to the next world. Two of them have been captured by minions of Mervil, and the third has been put to sleep. But we manage to solve the problems and restore all the sisters (Joshua and Maria, the last one, seem to fall in love), and it’s off to the next world. This world also contains a village of witches, who have isolated themselves from everything else so that even when the world dies, they’ll be able to survive.

The next world is the final one, a dead world where a disease created by Mervil has ravaged the population. Meanwhile Sara has cried two more tears so she only has one left — once she sheds that, the world will end. Here we have to reach Dead End Tower, where Mervil is. There, we fight the 4 generals of Mervil before finally encountering him at the top. 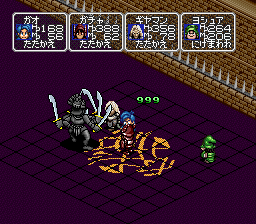 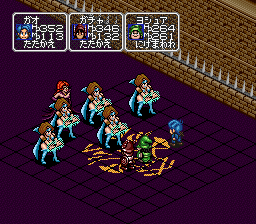 Mervil repeats himself about wanting to restart the world and do it better this time, but after beating hits three bosses Gao just cuts his jewel open and kills him. 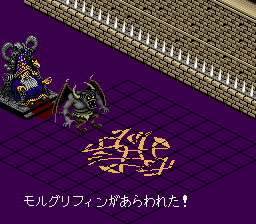 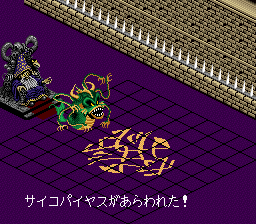 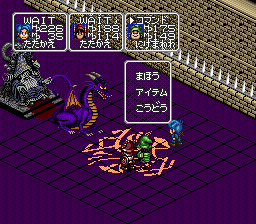 Now it’s time to go to the final area, the Life Kingdom to save Sara. Sara is in the back of a room, and Gao has to open the door by using four spells that he got in each of the worlds, rearranging the letters to spell “Revive, Sara!” Then the door opens, but only the Hero (player) is allowed to enter to see Sara. 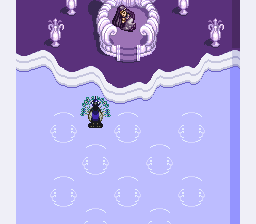 Sara says that as soon as the door was opened, the thorn was removed. But she says that it wasn’t Mervil who pierced her with the thorn, but a different enemy from outside the world. She appoints the Hero leader of her troops to guard against the eventual invasion of this other enemy, and says she’ll call on me when it’s necessary. I found this somewhat disappointing; the story up to this point was not that bad (it had a lot more detail than I gave in the post), but everything Sara says just seems like foreshadowing for a sequel that was never made.

In any case, all the characters get sent back to their home worlds and the game ends. 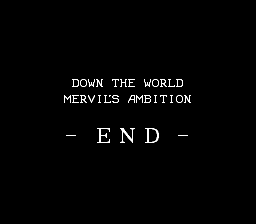 As I said, it’s really a shame the battle system is so boring. The setting, story, and characters are all pretty good for 1994 and if it had just been paired with a good battle system this could have been a classic game.