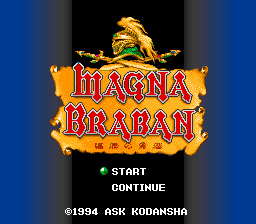 A number of roleplaying games have auto battle systems. Sometimes (as in Shin Megami Tensei) it just makes everyone attack until the battle ends. Other games have some kind of AI (like the Dragon Warrior games), customizable or not. But every so often a designer tried to release a game where the characters are not under your control except for AI. So far I’ve played Elfaria, Down the World, and perhaps Ogre Battle (although this one may not exactly qualify). Magna Braban is another game in this vein.

First off, a word about the text in the game, which is a travesty. It’s written in all hiragana which is normal for this age (I wonder what the last all-kana game will be?) But it uses quotation marks constantly for half the words in every speech bubble, rendering the text very hard to read. Here are three examples with translations in the captions, and this looks as odd in Japanese as it does in English.

I do not know why they did this, but imagine reading a whole game’s worth of dialogue with this constant use of quotation marks.

The game opens with the son of a shepherd, Kurisu, wanting to go participate in a fighting tournament in a nearby town. His parents are both against it, but he sneaks away and participates, only to be beaten down. He drinks his sorrows away with two other people who also lost, a magician Geena and a fighter Getz. While they’re drinking, the demon lord sends an attack force at the tournament area, killing everyone. Kurisu and the other two show up to see what happened, and when other soldiers arrive, they assume that because the three were able to survive, they must be great warriors. The King knights them and makes them the new “defeat the demon lord” unit. 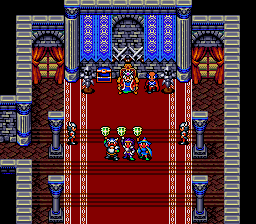 Kurisu gets kicked out of his house by his parents, but his mom gives him a Singing Crystal to remember her. They decide to head to Geena’s magic guild to find some way to get stronger, since they’re really in no shape to beat the demon lord. Here’s where the battle system comes in. 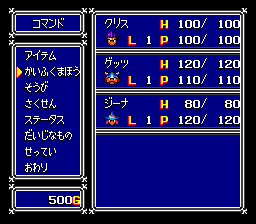 You can assign some pretty detailed AI to people. There are four general options, and within those options you can set what they will mostly do, and two things that they will sometimes do. 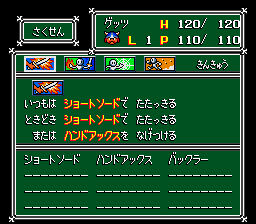 The big problem with the system is that the battle provides no feedback on how anything is working. You don’t see how much damage anything is doing, which makes it hard to know what to actually set people to do other than just attacking. It also means you can’t really follow what’s happening in the battle, you’re just watching the sprite animations go, and focusing mostly on the numbers at the top of the screen for player HP. 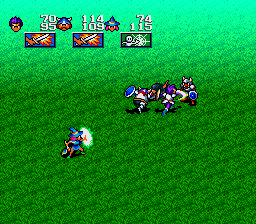 Also the game is real time, but you can pause at any time and use as many healing items or spells as you want from the menu; even people who are at 0 hp can use spells. This makes the boss fights trivial for the most part, since it’s hard to get a game over.

On the other hand, the grunt enemies are difficult. You will need to do a large amount of grinding in this game — the new equipment is expensive, and there’s always a huge jump in difficulty when you go to a new area. The random encounter rate is high, and inventory space is limited so it’s hard to use the boss “item/heal” tactic throughout the whole dungeon without running out of items if you’re weak.

I’m just not sure why developers felt the need to try to make a system where you can’t directly control the characters. I get that maybe they wanted to do something different from the normal system, but is this really all they could think of? It’s true that if you are just picking “attack” over and over again that’s not a whole lot different from an auto battle, but there’s something about the system in this game that doesn’t quite work.

The dungeon design is also terrible. There are no chests, no traps, no buttons, no puzzles, no anything — just corridors and a boss or an exit.

I often get accused of being too harsh on the games, or being jaded — I did look around for other Japanese reviews and although the Amazon brief reviews praise the game, all the extended reviews I found on other sites were negative and criticized many of the same parts I did. (One of them pointed out that the title “Magna Braban” is never used or explained in the game) Two of the reviewers expressed surprise at how positive the scores were on Amazon.

Anyway, at the Magician Guild they meet Baktun, who offers to make a strength potion if they will just get him the last ingredient — a Dream Mushroom piece. In a nearby town they meet the elf Lilliana, who tells them that they can reach the Demon Lord’s area from Elf Land, and joins the group. 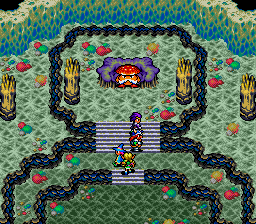 The Dream Mushroom turns out to be the mushroom king, who tells the party he’ll give up a bit of himself for the potion if they get him a life-extending potion from the nearby witch. The witch wants a dragon scale to make anti-allergy medicine for herself.

So finally the party ends up in the dragon cave, where they watch another knight group take out the dragon and then leave, so we can just go in and grab a scale without fighting the dragon. 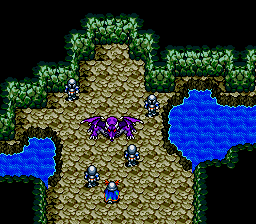 Back at the witch’s house, she gives us the potion, but Getz immediately spills it all. He replaces it with alcohol, hoping the mushroom doesn’t notice.

The king doesn’t seem to notice, but he never had any intention of giving us the mushroom piece — instead, he drunkenly attacks. After we beat him up he gives up a bit of himself and we go back to Baktun. 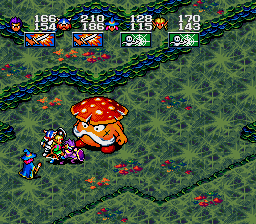 But it turns out Baktun is a servant of the Demon Lord and has made a control potion, not a strong potion. He kills some of the magicians and runs away. Geena’s grandfather, the head mage, gives us a bell to remove the control from the potion from anyone who falls under the spell, and we go on to look for Elf Land. 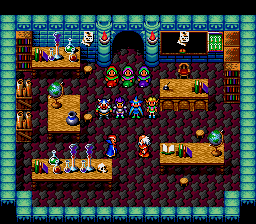 We take an underground passage from the guild, but run into ghosts blocking our way. Fortunately there is a cleric nearby who can help us (although Geena gets jealous of her), and that obstacle is dealt with.

The next town has Lototo (a parody of Loto from Dragon Quest) who is supposedly the descendant of a great hero and even has the hero crest, but something seems suspicious about him (this plot element is never followed up on).

Then we get captured by the king of a nearby land; of course he’s being controlled by Baktun. Lototo somehow knows how to pick locks so we escape and use the bell to free the king. At this point Geena is so jealous of Kurisu that she takes off on her own with the other girls who get captured by dwarves (controlled of course). We get on a ship to chase after them. 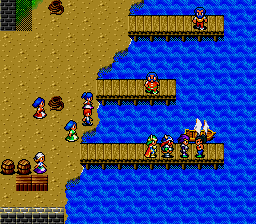 This is pretty much the end of the comedy and the “heroes accidentally blundering into stuff” part of the story, so it gets less interesting from here on out. We get Ann, a princess who can fight, as our next character. The dwarves are trying to revive the Dragon of Destruction and even though we ring the bell to free them in time, the Dragon revives anyway so we have to kill it. 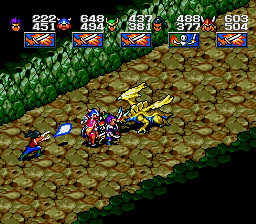 After freeing Geena, Kurisu decides she is the most important person to him and gives her the Singing Stone. He also asks everyone what their purpose in fighting the Demon Lord is.

Now we can finally make it to the Elf Village, where we have to do a few fetch quests to open up the way to the Ice Land that has the path to the Demon Lord. Meanwhile Baktun comes and tricks the rest of the party into drinking poison, so Kurisu has to go alone to find herbs to heal them (this part is annoying). 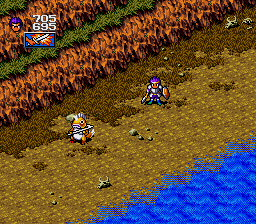 By the time he gets back with the herbs, Baktun has already charmed the poisoned party members (including Getz, who had the bell) and captured them, although Geena left behind the singing stone. The rest of the party chases after them, and has the final showdown with Baktun in the Ice Tower. After beating him, he brings out Gina to fight us, and destroys the awaken bell. But Kurisu is able to free Geena with the Singing Stone, and she kills Baktun. Now all that’s left is the Demon Lord.

We have to defeat the Demon Lord three times — with a bunch of healing items it’s not that hard, it just takes a while.

The conclusion has everyone go back to their lives, and the final scene is Kurisu and Geena married and living back in Kurisu’s hometown as a shepherd. He tells his kids the story of how they met. 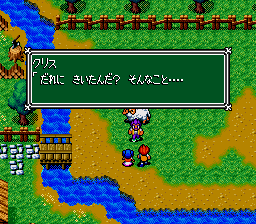 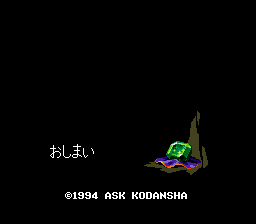 I suppose this game is not terrible, but it has a lot of squandered potential. I don’t know how many more of these auto battle games there are (at least Elfaria II) but I hope the next one finally figures out how to make it fun.
Next I am playing Fire Emblem 4 on the other blog; that’s a long game and I’m also going to be out of town for a while in June so it could be as long as a month before I have the next SFC game post (Aretha II). I’ll have some short posts the next few weeks — either forerunners of games (Aretha, Kaiju monogatari) or some other games coming out around this time.