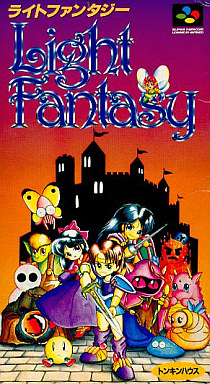 This is third in our five-game “kusoge” series. The game was published by Tonkin House, who also handled the (bad) port of Ys III to the SNES. The cover looks cute, and gamers may have thought that “light” meant it would be easy to play. The name instead seems to center around a “Light vs. Darkness” battle, which is an old cliche, but that’s not necessarily a bad start.
The King of Light is having trouble holding out against the King of Darkness. His daughter Lefina offers to be a hostage to buy time, but if she doesn’t return, she wants Kurisu (our hero) to try to save the world.

As you can see, there are facial portraits for all the characters (even random townspeople). This is also the first game I’ve played in this blog that has normal kanji and kana in the text.

Anyway, the king tells Kurisu that he’s willing to give up the last artifact of light (a mirror) in exchange for his daughter. Kurisu is a scared wimp, and you have the option to refuse the mission. This isn’t a fake choice; if you refuse you get thrown in prison. Either way, you have a dream about Lefina:

And then agree…unfortunately the mirror has been stolen, so the first quest is to find it. Now you head out into town, and one of the features of this game is that you can recruit random townspeople. Only fixed ones can be recruited, but in the first town you can get a boy, a bartender, and a dancing bunny girl. You can freely rename them in the temple.

Now, the starting money is too low to buy more than one or two pieces of equipment, but that’s not necessarily a problem. So far, this game doesn’t seem so bad!

(One thing that you should do at this point is go to the settings menu, and do the first part of the Konami Code on the second controller. This brings up a hidden menu where you can set the walking speed to “fast”. You have to redo this every time you load a save, or if there’s a scene where your character automatically moves somewhere. But it’s worth it.)
And then you leave town and get into your first random battle, and everything comes to a screeching halt.

I immediately got a game over in the first fight of the game. When you look at Japanese playthroughs, reviews, and such, the universal consensus is that this could have been a classic RPG if not for the deeply flawed battle system. What’s wrong with it? It may be hard to tell from the above screenshot, but it was clearly modeled after Ultima III. Here’s a rundown of the problems:

Here’s a video that has a number of fights, if you want to see examples:
Because of this, a lot of the advice on walkthroughs is about how to minimize battles. There are two helpful tricks/bugs for doing this:
So after my initial beatdown I got a bunch of money from the matching game to get decent equipment, and then set out. In the second village you get a powerful dog ally plus you can buy bows, which is a big help. The first dungeon is under the large tree in the village. This has the old Dragon Quest system of needing torches or light spells in the dungeons, although when you get in a random battle or take poison damage the entire screen lights up briefly. In the dungeon you have to remove a key that’s hurting the tree, and you also find a trapped pixie:

The pixie is one of the “destiny” people that you can’t freely add or remove from your party. She’s worthless because her movement is the smallest possible (not even 1 diagonal square) and she can’t equip the bow. But we have to take her along. The key opens the cells in the starting castle, and I was able to pick up a demon there to join my party. He got equipped with a Chainsaw.

Next up is a cave where some sort of cat or dog humanoid has been trapped. Once you reach the cell on the third floor, you have to fight a boss (Miradi).

The demon is above him, but can’t attack. For some reason there’s no way to attack the boss from above. But because of the money trick I used my characters are probably a little better equipped than they should be so it wasn’t too bad. Note the dog has over 300 HP.

So that’s where I am right now. I’m hoping that being prepared will let me make it through the game despite the battle system, but we’ll see.