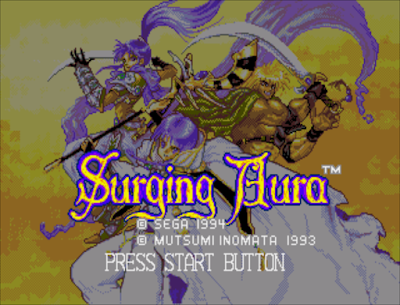 For this week’s off-week post I’m looking at Surging Aura for the Mega Drive, which came out the same day as the next two SFC games on my list. I was already planning in my mind a post that would contrast the Mega CD with the Playstation that just came out as well as the PC Engine CD — but then I realized that Surging Aura is not a Mega CD game, it’s just a regular Mega Drive cartridge game. It looks like of the 4 Mega Drive RPGs that came out in 1995, only one of them was a CD game. This is in sharp contrast to the PC Engine, where the final non-CD RPG came out in 1992. The Mega Drive was a more technologically advanced system than the PCE, but it’s still surprising to see that many games released this late in the system.

As you can see from the title screen, the character designs are by Inomata Mutsumi. She is best known for her work on the Tales series over 20 years; this is an early video game she worked on (I believe she had done some anime work before this as well). This game has a feature I wish SFC RPGs had — inset graphics and face graphics. 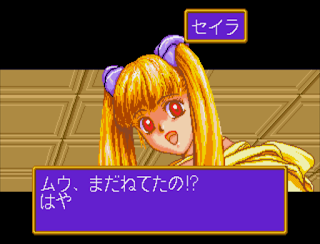 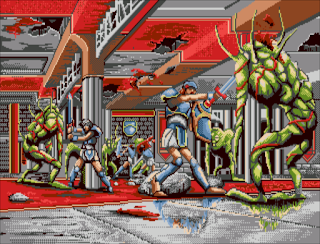 Maybe there was a feeling that it’s better for all the action to take place in one style of view, but I like these graphical insets, especially for games when you can barely tell even what the characters look like without the instructions.

The story starts out pretty cliche — the main character, Muu, is waking up to go through a ceremony to confirm him as crown prince. But as the ceremony starts, monsters attack and seemingly kill everyone, including Muu himself. But a “time rabbit” comes out and restores Muu’s life, leaving him in an unknown place. But since he’s a silent protagonist we don’t know who he is or where. 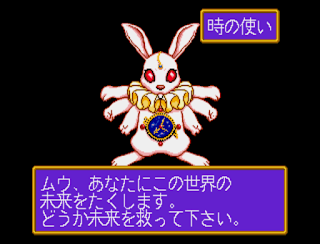 Immediately in the town he wakes up in, bandits attack the magic shop and steal away a girl, and Muu finds himself assisting a local guardsman who is in love with her to free her.

The combat system is interesting; it’s a realtime system where you choose an action while a glass sphere fills up. When it fills, the action happens (but magic takes additional time beyond that). Then they will just keep doing that action until you change it. Muu starts off weak; he seems to be the only magic user (at least judging from the status screen, which has no space for any other characters to have MP). 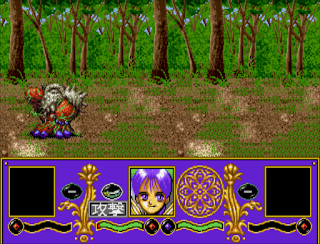 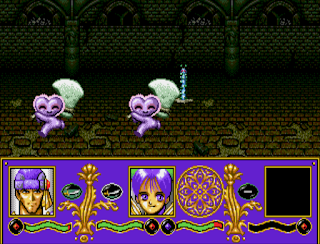 The interface is rather frustrating to use, particularly the spellcasting. There are 6 types of spells you can get and there is some complexity in that, but to choose a spell in battle you have to use this confusing wheel and a number counter; I never found it convenient to use (I notice that richie, in his walkthrough, says that the system is bad — I’ve never seen him criticize a game in the ~40 or 50 walkthroughs of his I’ve looked at up to now).

So this is a pretty short post as these off-week ones usually are. This isn’t a terrible game and it seems generally competitive with the quality of games that were coming out for the SFC. I’m surprised that it wasn’t released on CD.