Sorry for the lack of updates, I’m in the middle of another move so things will be tough until mid-August. 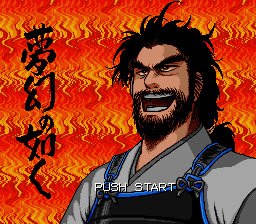 This game is based on a manga by Motomiya Hiroshi, best known for his long running Salaryman Kintaro series. The series is an alternate history of the Sengoku period, with Oda Nobunaga surviving the fire at Honnoji and setting out to take over the world. The player controls Nobunaga. From what I can tell, this game tells a somewhat alternate story from the manga, although I can’t get enough information to find out how close it is.

The battle system itself is fairly standard AMID, but there is a fairly robust class system. Everyone has a class, and except for Samurai like Nobunaga, the class can be upgraded at various places, which reduces their level to 1 but allows for better abilities. Abilities are learned by seeking out hermits, mystics, and other people who can teach skills, if the person’s level is high enough. Given that this is the Sengoku period, you can even get Portuguese Catholics on your side. 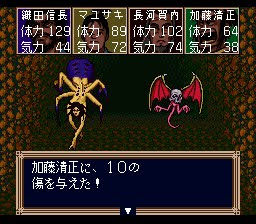 Fortunately the characters have enough MP, and MP restoring items are common enough, that you can actually make use of all the abilities the game gives you.

The random encounter rate is high, but the areas are small and you level up quickly, so I didn’t find this too much of a problem.

One other thing the game has is an Ogre Battle-like “war mode”. 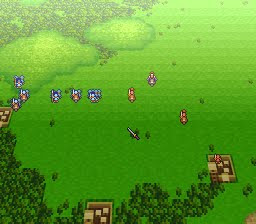 It was a nice idea but there’s really no purpose to it; you just send everyone after the enemies and win. 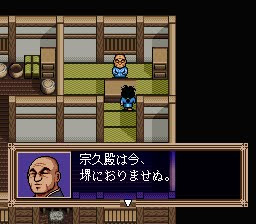 One other annoyance is the small inventory limit. I really hope that “feature” is disappearing for good soon.

The game begins with a lengthy story sequence showing that Nobunaga has survived Honnoji, but rather than take over Japan, he leaves that to Hideyoshi and decides to go for world domination instead. First he needs a ship. Although that setup makes it sound like the game will go beyond Japan, the entire game takes place before he leaves (in the manga he does actually make it to the West). 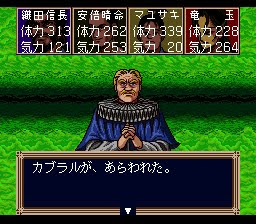 The story of the game basically involves Norinaga supporting Tokugawa Ieyasu and Hideyoshi from behind the scenes as they attempt to take over Japan. Norinaga’s main opponents himself are the priest Tenkai, who (based on an old legend) is actually Akechi Mitsuhide (who betrayed Norinaga). The other is the priest Fransisco Cabral, who in this game has called upon dark forces to oppose Norinaga.

If you are into Sengoku jidai stuff you’ll probably appreciate the story more than I did since there are a lot of historical figures you can meet, and it’s probably fun to see how the story plays with the “known” history of the period.

Overall this is not a bad game at all for late 1993. It’s also fairly short (my timer was 15 hours). Sadly there’s no translation patch, but maybe that will change in the future.

In terms of new developments, Ogre Battle is the first real-time SRPG on my list. Along with Super Robot Taisen 3, it also brings in the multiple paths and endings that become more common with SRPGs as we move forward. 1993 has the first Super Famicom game and the last PC Engine game.

Choosing a game of the year is tough here — I know that a lot of people would pick Shining Force II, but as I said in my review I was somewhat disappointed with it. Ogre Battle would be another popular choice but once again I found it frustrating. For me, I think I would have to go with Super Robot Taisen 3. The branching storylines, multiple endings, and large cast list are a huge advance on SRT 2 and I had a lot of fun with this game. It’s difficult until you figure out how to manage the system, though.

In addition to SRT 3, I would recommend Shining Force II, Shining Force Gaiden II (better to play the CD remake), and Ogre Battle. Albert Odyssey is not a good game. Sword Master has an impressive story and visuals, but the gameplay is not especially good.

1994 is all Super Famicom and Mega Drive games (the last 3 MD games I’ll be playing). Fire Emblem 3 is probably the biggest and best known game on the list, but I’m interested in Hioden, which is another real-time game that has SFC mouse support.

One other thing that I’m going to try to do going forward is make at least one video for every game, even ones that I’m skipping because I’ve already played them or they’re ports. A lot of these games either have no videos, the videos that exist are short and of poor quality, or you won’t find them unless you search the game name in Japanese. At some point I would like to go back and make videos for the games I’ve already done but that’s not a priority.

After staring at this game for a while, playing another game, going on vacation, and staring at the game for a while more, I finally decided to move on. The game is available with a translation patch and in an official version (through a remake) so everyone can try it themselves.

As I said in the last post, I was at the point where I was going to have to do a large amount of grinding to beat the final boss, and I just wasn’t in the mood. So I’ll talk about my impressions of the game here and then move on.

Romancing SaGa 2 is definitely a better game than 1. It fixes a large number of the problems that I mentioned about that game, and is generally a more enjoyable experience.

SaGa games aren’t known for their stories. This game has a really interesting concept — the world is waiting for the return of 7 legendary heroes to save the world, but when they do return, they seem to be villains instead. That’s about the limit of the story, though. I never saw an explanation for why this happened (although I didn’t go to a village where supposedly some of the backstory would be explained).

There are a lot of fun aspects to the game system. Your main character is an Emperor or Empress, and will pass on their skills through successive generations. This system is a bit scattershot because it’s not like the generation systems of other games. You can start a quest, 260 years pass, and the same NPCs are sitting around waiting for you to finish the quest. I like the idea that if you lose your party you move on to the next generation, but it takes too long to set up a new generation with the skills and magic.

The graphics are quite good, as to be expected from Square. The music is well done too, and the interface is (mostly) clean and usable.

My ultimate criticisms of this game are twofold, and I’ve mentioned them before. The first is that the game system is too opaque. Hardly anything about the system is explained either in the instruction manual or the game itself. This makes it hard to make intelligent decisions about which classes to use, what weapons and skills, which magic, etc.  Now, this wouldn’t necessarily be a huge problem, except for my second complaint — the game is too difficult.

Right from the start the difficulty is brutal. You spend the entire game with the danger of getting wiped out by a random encounter. Fortunately you can save any time you want, but it’s frustrating to constantly feel like the monsters overpower you to the point where it feels like you may not even complete the dungeons.

That being said, with knowledge of the system from the discord and walkthroughs, I was able to make it to the end of the game with very little grinding. However, the final boss represents a massive increase in difficulty from anything that comes before. There is a cheap way to beat the boss and a more “legitimate” way, but both ways require long hours of grinding to get the right skills and spells necessary. I just don’t find that appealing.

Everything I’ve said may make it sound like I disliked the game, but as with RS1, my feelings were mixed. I enjoyed the game at many points but got annoyed with it at many others. I have no desire to complete the game, which is not a good sign. Plenty of people enjoy this game a lot, though, so it’s probably worth a try, especially in the enhanced remake.

I have five more games to go in 1993: Yumemaboroshi no Gotoku, Wondrous Magic, Monster Maker III, and Shin Momotaro Densetsu. As far as I can tell, none of these have translation patches. There is also the PC Engine version of Ys IV, which I am looking forward to quite a bit.

This is the final game of 1993 and the last PC Engine game. The PC Engine continued on strongly through 1994 and limped along until 1996, but no more strategy RPGs came out for the system.
The story is pretty good for 1993. Most of your party members have little to no presence in the story but Aks and the main characters have developed backstories. There are a lot of cinematic sequences and voiced sections of the story.
The gameplay, unfortunately, is not as good. The game suffers from pretty serious balance issues. The first problem is that the damage you take or do can vary widely — with reloading I’ve seen the same attack do 1 damage, and then do 23 damage. For reference, the final boss has 32 HP and your characters will likely not get into the 30s. This wild luck also seems to affect the level up bonuses. A lot of times you get nothing on a level up.
But the most serious problem to me is the XP awards. I’m not completely sure what the formula is, but it’s clear that by far the most important factor is the amount of damage you do. There seems to be a small effect from level difference and from killing a monster, but if you kill a monster at 1 HP by doing 1 damage, you will get almost nothing. This makes it extremely difficult to use your full party, because you can’t really catch up the weaker characters. The game has no money or shops, meaning all the equipment you get is pre-determined, and there’s nowhere near enough equipment to outfit your entire party.
The game is not especially hard since you can save as many times as you want, and having a few strong characters is good enough to clear the game. But it’s more satisfying to be able to use a larger party rather than just having them sit back and watch.
So I probably wouldn’t really recommend this game; as I said, the story is interesting enough, and if you really like the PC Engine it might be worth a play. But there are better SRPGs even in this period.