I’m on the last chapter of Vandal Hearts so I should be back here next week. Until then, a short post continuing my “old RPGs” sequence — this time the Famicom Disk System game Deep Dungeon. This is the first of four first-person dungeon crawler games for the Famicom (the first two for the disk system). It’s the first attempt to transfer the Wizardry-style gameplay to a console. It is considerably simpler than its inspiration; you control only one character who is just a fighter — you can buy items and use them to cast spells by spending HP, but other than that it’s just attack. 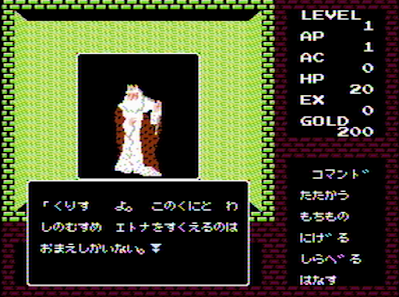 The story is pretty simple — a princess has been captured and you have to go into the underground dungeon (just like Wizardry) to find her. There are 8 floors about the same size as Wizardry ones. The game is also quite similar to the first Wizardry in that the main activity of the game is making maps of the dungeon. There is very little to find in the dungeon — for instance, the first floor has a couple of places where you can find gold, and one message. There are some places with guaranteed encounters and adventurers, but other than that the maze is empty. This is something that I found fun when I was a kid and hadn’t played many of these games, but now I feel like there has to be stuff to find in the dungeons or it’s not fun just to wander around.

One other clear indication of Wizardry’s influence is that you have to press a button to kick a door down rather than just walking through it. 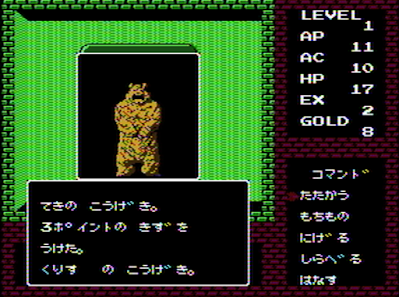 Saving requires you to switch sides of the disk, which takes a long time (of course in a modern emulator you can just use a save state). 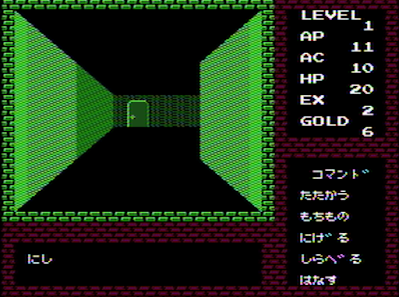 I wandered around the first floor for a while. The encounter rate is very low, but the main character has a hard time surviving. There’s also a certain sluggishness to the whole game, which is not that surprising from this era.

There is a translation patch (and a full set of maps on GameFAQs) so this can be played, but it’s hard to imagine many people finding it fun. I think I would have enjoyed it in 1986 when it came out, because these kinds of RPGs were still fairly new. But I can’t see playing it now except for some kind of masochist completion.

The series takes steps forward in successive entries, by adding multiple dungeons, more characters. The second game came out about 6 months after this one, suggesting that like Dragon Quest I this was more of a trial run and the next game is a more polished entry. If I keep doing these early games now and then we’ll see Deep Dungeon 2 before too long.