I’ve thought more about how long I’m going to play each game. Here’s one rule I’m going to use — normally I am not going to make use of walkthroughs (unless absolutely stuck) or emulator features. But if I’ve played a decent amount of a game and it’s getting boring or frustrating to the point where I’m wanting to move on, I’ll first switch to using a walkthrough more and even some save states if necessary. Which is where I am with GDLeen. I detailed some of the problems with this game in the last post, here are some more:

Anyway, at the end of the last post Fana had left to tend to her mother. Unfortunately that village gets attacked and she is (once again) captured, so we have to go after her. We go to the Temple of the Sun in the capital of the Euredona, where a priest named Luna joins our party.

Luna is necessary because we need her power to open the Cave of Darkness, where Fana and several other women have been taken by followers of Zuul. The Cave is long and has a lot of treasures, as well as places where the ceiling falls in on you. This can result in gold, enemies, damage, or even healing (via water that comes out).

You have to use ropes to descend through holes in the cave as you go. The monsters aren’t all that hard, unless they come out with the status effects I was talking about earlier. Here’s an example: 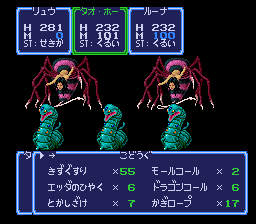 End of the first round of this fight. Ryuu is petrified, and Tao Ho and Luna are confused. So it’s hard to even cure Ryuu’s petrification because the confusion makes it hard to use items successfully. I tended to run from this particular fight whenever I saw it come up, and this is also where I started using Monster Repellent as often as possible. It doesn’t last very long, but it avoids a good number of the encounters.
Eventually we reach a room with 4 Zuul Priests, who get an unusually graphical battle sequence, where they went through the trouble of making four separate sprites for each priest. Now this is the fight I was talking about in my previous post, where the first hit was a super critical for 985 damage. I reloaded a save state after this.

Unfortunately even after defeating them, the girls fall through a hole, leading you to another boss fight against a dragon with three heads, which must be defeated one by one. 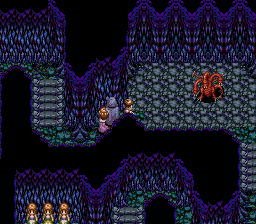 And then we save Fana and the others. Luna leaves the party, so she was just a Fana substitute. Are we ever going to get a party member who is not a magic user? 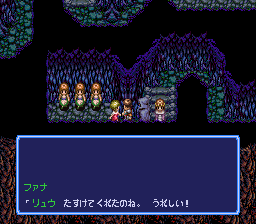 Returning to the village, we learn more about what we have to do next — it’s a multi-part fetch quest.

Now what do bad RPGs do in order to increase the play time without putting in extra work? Make you revisit previous dungeons. The first heavenly stone is in a Cave of Treasures, which is a lot like the Cave of Darkness with slightly different graphics: 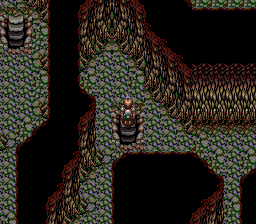 But after this, we next have to go back through all the previous dungeons. I had noticed locked doors in them, and now with the magic key I can go back to each one and open the door to get one of the orbs. There may be one new dungeon in the Bavaris capital, which I did accidentally go to when I was blundering around looking for the Cave of Treasure. But my next destination will be three previous dungeons to pick up the orbs. Time to replenish my supply of Monster Repellent and get going.