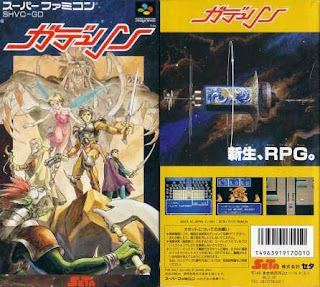 The first RPG for the Super Famicom was Drakkhen, which is a computer game port. My memory of this game is renting it soon after I got a Super Nintendo and being confused and disappointed by it. Fortunately the CRPGAddict already played it (and it fails all three of my criteria).

The first Japanese-made RPG is called GDLeen, which the katakana helpfully tell us is pronounced something like “Gadyureen.” It’s based on a series of novels by Ramon Yuto called “The Self-Navigating Planet GDLeen,” about a constructed planet-ship, which you can see in the back cover of the box. There was an OVA based on the books, as well as a PC-98 game called “The Magic Stone of Digan.” I was able to grab a few pictures of it off a Nicovideo playthrough of the game.

Judging from the gameplay I saw and these screenshots, it seems to be fairly heavy on story and dialogue, with some impressive graphics in the cutscenes. The battles look similar to Ultima III.
The Super Famicom game has nothing to do with this, however. It’s in the tradition of the Dragon Quest style of RPGs. You begin the game right in the thick of things, as Ryuu, our main character, is crash-landing onto the planet. Apparently he’s just a regular office worker; this isn’t clear in the game itself but was probably given as background in the instruction manual. 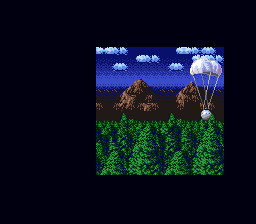 Fortunately he is able to eject from the craft in an escape pod, but he’s still stranded on this mysterious planet — as he was crashing, he could clearly see this was a constructed ship of some kind.

Ryuu grabs his laser gun, a space suit, and a space helmet from the escape pod, as well as a few medicines, and starts walking to find out where he is. Immediately you start having random encounters. The battles are Dragon Quest style, with a black background, enemy sprites, and your own characters just represented by stat boxes.

The enemy sprites are fairly well detailed. The battle menu is somewhat complex — we have the normal Fight, Run, Item, and Defend. But there is also “yuugeki,” which is waiting for the enemy to attack and countering, and “talk,” which lets you try to convince the monsters to join your side. I haven’t tried this yet, and from the little information I could glean online, it doesn’t seem like either of these options are that useful. I think you need monster food to do the “talk”, so I’ll try it later when I get some. Other than that you just shoot the monsters with your laser gun.

One aspect I’m not sure about is the defending — often when either you or the opponent attack, it will say “You didn’t let them defend!” but sometimes your HP box turns red and it says “Defend!” for a few seconds. I’ve tried pressing buttons and nothing happens, it just says “Can’t defend!” This is another time I wish I had the instruction manual, although I found Japanese players asking about this online as well.

The most problematic aspect of the battle system, which is the most common complaint I’ve seen about this game, is the critical hit system. Any attack has a chance to do a critical hit, and the criticals can reach absurd levels of damage, to the point where you can be one-shotted by any random encounter. It’s not common, but the random encounter rate is fairly high, so this can be a problem. Fortunately they’ve borrowed from Dragon Quest in sending you back to the previous save point with your XP, and in this case your money, intact. Any dead party members will still be dead, but at least you don’t lose all your progress. Back to the critical hits — I’ve read that you can kill the final boss in one hit if you get lucky and get the 12x damage critical (which also ignores defense). 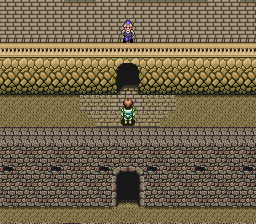 Anyway, Ryuu walks a bit and finds himself in a semi-abandoned outpost; there are a few people, including one who heals you and another who lets you save, but no shops. We do begin to learn a little bit about the world, though. “Gavana” is the name of a god who reportedly created the world of GDLeen. There is a book of history in the outpost, but it needs an Euradona to read it. Unfortunately to pass the outpost Ryuu must deal with a giant spider. After adventuring around a bit and grabbing a few chests, I encountered the Tarant:

At this point in the game you don’t really have any options but to keep attacking until it dies. It has two moves that essentially waste its turn — one that poisons you, which has little effect during the battle (and none if you’re already poisoned), and another that cancels your action, but has no effect if you go before it. So basically you just have to rely on luck; I died once, but on the second try I was able to finish him off and move through the dungeon.

After coming out on the other side, Ryuu soon finds himself at a spring, where the scene occurs that’s probably most memorable for the young boys who played this game when it first came out: 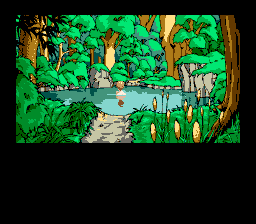 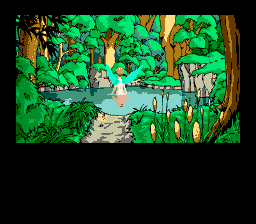 This is Fana, a member of the Euradona, who gives you a ring so that you can understand her. She then is able to read your history book: “Gavana is an almighty god, who led everyone and created GDLeen. In ancient times, the gods traveled across the galaxy to various planets with a ship. Gevana also created other ships for the visitors who would come from other stars. Travelers must come to GDLeen. The people will break into good and evil, and the Travelers will become involved. Those who are good will help the Travelers, and those who are evil will oppose the Travelers. Eventually the Travelers will gain the right to meet Gavana.” Fana assumes Ryuu must be a Traveler and decides to follow him. She is a magic user: 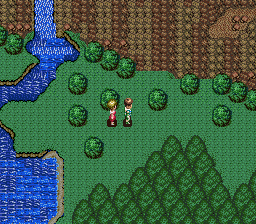 I stopped at the next save point, so I’ll end my first post here.