I ended up leveling until Kurisu was at 40 and everyone else was in the high 30s. With this and some strategy changes I was able to win, although it was close. I tried to keep up Fubaha (reduce fire/cold damage) and Bikilt (x2 damage) as much as possible. At first I was using Skult (def. increase) as well but his physical attacks aren’t that bad so I stopped. I would switch in Pierre the Slime Knight (as in the screenshot above) for Ghanima when I needed healing. When I finally won, Leto was completely out of MP and Ghanima was getting low. It’s really Mildras’ healing that causes such a problem.

The ending sequence isn’t anything special — you have saved the world, and the Master Dragon flies you around to significant cities so you can hear congratulations from people like Henry and Flora. You get to explore the city and then leave, and the Dragon flies you to the next place.

Finally Kurisu returns to Granvania to become king, and Papas and Martha watch over him from beyond. 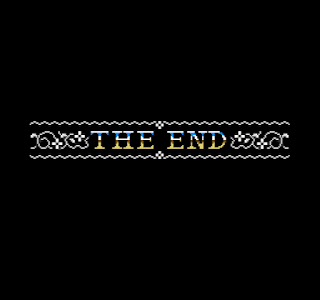 Or is it!?
There is a bonus dungeon. Rather than making a clear save, you just reset the game, load a save, and go into the marsh south of the final dungeon. I was worried at first because some walkthroughs said you had to talk to everyone in the ending sequence (which I didn’t do), but that’s not necessary. What I don’t know is whether there’s any way to know about this dungeon (or how to access it) without a walkthrough. I never saw anything that could be interpreted as even hinting towards its existence.
There’s not a whole lot to say about it. It’s fairly small and has mostly the same enemies as the final dungeon, with a few new ones. You find some great items, mostly powerful equipment for Kurisu as well as the Drum of War, which is an item that casts Bikilt on all party members. Also the Iron Ball of Destruction, an all-target weapon that is very powerful, and will make appearances in future DQ games.
At the bottom of the dungeon is Esturk from Dragon Quest IV.

He doesn’t remember anything but his name, and wonders if you’re there to destroy him. You can pick “no” and leave, or fight him. He’s basically Mildras on steroids, although I don’t think he can heal.

I died pretty quickly. I would probably have to grind at least to level 45, and possibly higher, to beat him. There’s really no purpose to it — all he does is say how many turns it took to beat him, and then you can leave and fight him again if you want. I’m not going to bother.

I wonder how Japanese players would have found out about it. In the US I would have found out through Nintendo Power most likely. Perhaps there was a similar magazine that would have clued players in, or it could have been word of mouth. I remember a kid at school telling me about the Pink Tail in Final Fantasy II. I actually wrote Nintendo a letter asking about it and they wrote back telling me how to get it; I wish I still had that letter.

So that’s it for Dragon Quest V. Definitely the best game I’ve played on this blog so far. Review to follow probably on Wednesday, and then this weekend I’ll make the first post about the next game, Cyber Knight.