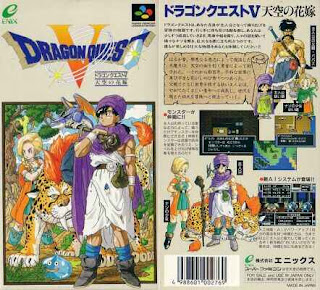 This is surely the best known game on my list so far. Of course the Dragon Quest series is the pioneer RPG series in Japan, and as far as I know it still outsells Final Fantasy there. The first four games in the series were all localized into English for the NES. They went all out for the first two, improving the graphics and adding a battery save (the Japanese versions of I and II used passwords instead of save files!) They also changed the names to sound more high fantasy (e.g. “Loto” to “Erdrick”) and translated the dialogue in a pseudo-archaic style, whereas the original Japanese is standard colloquial language.

Unfortunately after IV, it was 9 years until the next game came out in English. V and VI, the Super Famicom titles, were skipped, along with the remakes of the first three games. However, complete or nearly complete fan translations of both games were done in the early 2000s, letting Western players experience them. Subsequently the DS remakes of both games were localized.

So this game is pretty well known and can be experienced in English both in original and remake form. If the only purpose of this blog was to document unknown games, I would skip this, but I also just want to have fun playing good Super Famicom games.

Anyone who has played the first 4 games will feel right at home here; Dragon Quest has always kept a more consistent gameplay style than Final Fantasy. The sound effects are all the classic ones, and Sugiyama’s music and Toriyama’s character and monster designs are familiar. Of course there are new elements as well.

The game starts out with a short prologue featuring the birth of the hero (and death of his mother). We then jump 8 years later, with Papas (the main character’s father) returning to his hometown with Kurisu. While Papas catches up at the port with old friends, Kurisu wanders out of town and gets in the first battle:

The slime is the iconic enemy of Dragon Quest, so it’s almost always among the first monsters you encounter. Three slimes is a bit much for 8 year old Kurisu, but Papas quickly comes in to support and make quick work of the enemies. Then we continue on to Papas’ hometown. While Papas is engaged with other stuff, Kurisu is able to wander off into the first quest — finding a medicine maker who has been trapped in a cave in the town. Fortunately the merchants are willing to sell weapons and armor to an 8 year old. By the way, you can finally see the stats of equipment and who can equip it before you buy it. I think maybe Heracles III had this too, but none of the other games.

One thing I’ve always liked about DQ is how dying takes you back to the last place you saved with half your money, but everything else intact. Coupled with the ability to store money in a bank (or just buy equipment with it), this usually means that you don’t have to grind before you can even attempt a dungeon. You can always try your best and then just accept the death, and next time you try you’ll be stronger. Once you get the “leave dungeon” and “return to town” spells it’s even better.

Kurisu saves the medicine guy, with Papas none the wiser. Now it’s off to Alpaca to the west, to deliver the medicine. Here Kurisu meets Bianca, the innkeeper’s daughter. They see some kids tormenting a “cat” of some sort, but they promise to release it if you’ll clear the ghosts out of a nearby castle. Of course we have to sneak out at night so our parents don’t know.

The castle is a little harder than the caves. It has a delightfully creepy atmosphere, with ghosts everywhere, things moving on their own, and such.

It even has an inn you can stay in, which transports you back to the beginning by an old man’s ghost. I wasn’t aware of this at first and walked all the way back to the town. Papas takes ill by the same sickness Bianca’s dad had, so that gives you as many nights as you need to finish the castle.
The brownies are tough enemies who miss most of the time but get criticals that can take a lot of HP off. I lost to the boss ghost once, but once Bianca learns the lower defense spell it’s much easier.

Once you beat the boss ghost, the ghosts of the king and queen can re-enter their graves, thus calming the castle down. The kids then agree to give you the cat, who is actually a baby panther. One of the new features of this game is that you can recruit monsters. DQ4 had some monsters you could get on your team but they were set by the plot; this game lets monsters join you after battle. Here’s some nice fan art of Kurisu, Bianca, and the panther.

Papas then recovers and we head back home, leaving Bianca behind. Now it’s time for Kurisu’s third secret adventure. A wispy elf, who only Kurisu can see, appears and leads Kurisu up some stairs to a secret land of elves. The head elf needs a wind flute to restore spring to the land.

An elf, Bera, joins you as well, although you can’t change her equipment. I was finally able to buy the Boomerang for Kurisu. This is a nice weapon that’s new to the series with DQ5; it can hit all the enemies. There are also whips that can hit a group. The damage goes down after the first target but they’re still pretty good.

The elf quest involves two parts. First you have to go learn the technique of the thieves’ key from a dwarf in a cave. Then once you have that, you can open the door to the ice cave up north. The ice cave is interesting because you have to plan your movements. You go sliding around when you walk a direction so it takes some experimentation to get everywhere and recover all the chests.

Finally we confront the boy who stole the flute, and it turns out he was being tricked by an evil magician.

This completes the elf quest, and the elf leader is able to restore spring to the land. He promises that when Kurisu becomes an adult, he’ll repay the favor.

Of course Papas continues not to know anything about his son’s adventures, and next we’re off to a castle. It seems the new queen favors her own son over her stepson’s, who is first in line. Papas is assigned to look after the crown prince, although he’s a big jerk. It’s not very long before bandits come in on the queen’s orders and kidnap Henry (the crown prince).
They’re supposed to kill him, but they decide to sell him into slavery instead; same result, plus they get money. This time Papas jumps into action, leaving on his own to find Henry, and making you follow behind. After progressing through a twisty cave, Kurisu catches up with Papas and we find Henry, in the clutches of some sort of warlock or demon named Gema. Gema sends his lackeys after Papas, who fights them off easily.
But then Gema grabs Kurisu and holds a knife to his throat, forcing Papas to stand while the lackeys beat him up.

So Kurisu gets to watch his father beaten up and killed. Gema then attacks, and easily wipes the floor with both Kurisu and the panther.

Once Kurisu is knocked out, Gema decides to sell both Henry and Kurisu into slavery, and throw Bolongo out in the wild where he’ll revert back to being a normal wild panther. This is the end of the first section of the game, and the story moves ahead 10 years — Kurisu and Henry are still slaves.

That’s a remarkably dark turn of the story. There are a lot of parent deaths in video games but here they actually let you travel around with your dad and do stuff with him, so it’s a lot more emotional when he dies, especially since you have to watch the enemies chip him down with attacks, while he just sits there and skips his turns. Not only that, but then Kurisu spends more than half his life as a slave.

So that’s where I’ll end this post. I’m already several dungeons beyond this so I’ll have another big post on Saturday.
I’m not sure I can adequately communicate how fun this game is compared to the garbage I’ve played before it. I’m looking forward to playing the game, and I don’t have to use any speedup buttons or anything like that.