(This post will not be quite as detailed as some of the others; I played the game over vacation and wasn’t as careful about taking notes as usual.)

A mere six months after the release of Shining Force, Sega put out another Shining Force game, this one for their handheld the Game Gear. The Game Gear was one of several systems that tried to challenge the Game Boy, but really couldn’t. I never had one, but I remember a few friends who did — although it had the advantage of being in color, it ate up batteries much faster than the GB (and used more of them), and didn’t have as good a game library. There are only 4 SRPGs for it on my list.

The graphics are serviceable, and not bad for the era it came out. 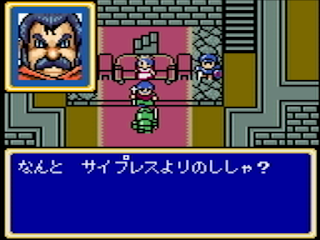 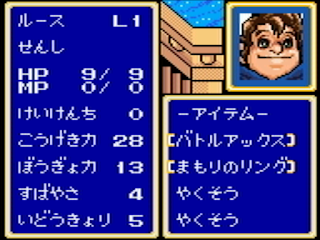 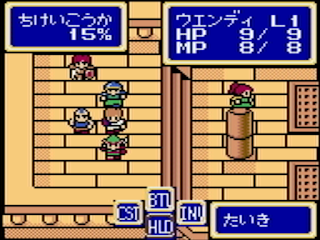 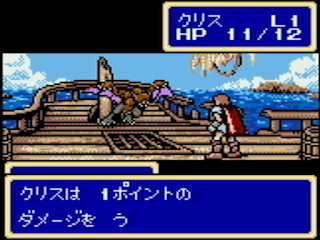 The interface is basically the same as Shining Force, but has some improvements — for instance, you can actually see your character stats during battle.

However, I didn’t play the game on the Game Gear. In 1994, Sega remade both Gaiden and Gaiden II as Shining Force CD, and added a short third scenario as well as a bonus “Museum” battle where you fight all the old bosses. So I’ll be playing Gaiden 1 and 2 on the remake. 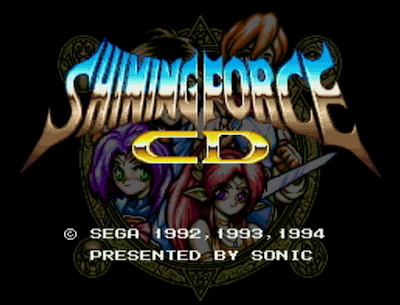 The Sega CD, like the PC Engine CD, was attempting to compete with Nintendo’s products by offering the CD technology to improve the games. However, it had a persistent problem that the underlying hardware was not as good as the Super Famicom. So you had much better music and voiced dialogue, but worse graphics, and a generally poorer library (although PC Engine was much better in that regard). I don’t know how much SFCD upgraded the gameplay and interface from Gaiden, but it seems fairly similar.

The game opens with a sequence narrated by Mitsuishi Kotono (Sailor Moon and others). The only voiced dialogue in the game are these opening and ending sequences. Like the PCE, the images are static pictures or pictures with minor animation.

The game takes place 20 years after the original Shining Force. Anri, who is now Queen, is put to sleep by a trick of the ruler Woldol of the kingdom of Surplice. The heroes, who are almost all children or disciples/friends of the heroes from Shining Force 1, have to go find a way to restore Anri and defeat Woldol.

The gameplay is almost identical to Shining Force. I only noticed two changes. The big one is that the game has no town exploration; instead, between battles, Larg (from the original SF) offers services that the towns offered before. The second is that the level ups seem more consistent than the original, and the promotion problem I talked about in the SF1 review is gone. 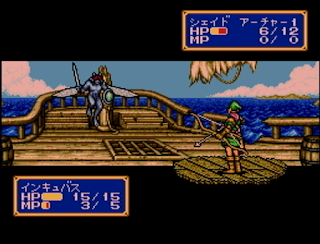 Your party is smaller than SF, but the characters are basically the same. 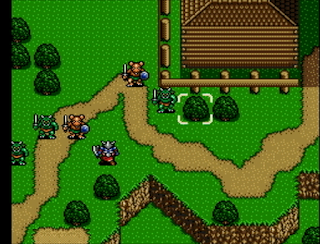 The game is also a lot easier than SF, which was already not that hard, which is partly why I don’t have that much to write about it. Since CD did come out in English, you can play to see the story for yourself — it’s basically a retread of SF1. I’m going to hold off a complete review until I finish the entire SFCD.

Sorry for the short post but I don’t want to get hung up on this game — I’m already more than halfway through Vixen 357 and I have more to say about that game.