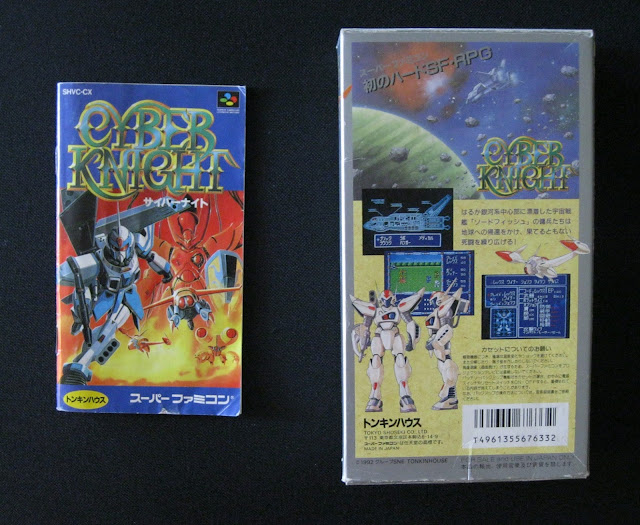 I can’t say I’m happy to see Tonkin House’s name pop up again. So far their contributions to the SNES are Ys III (a bad port of a bad game) and Light Fantasy (the worst RPG for the system so far). This is a port of a game that was originally released for the PC Engine (Turbo Grafx). I’ve said that I can skip a game if it’s a port, but that’s mostly to avoid bad/lazy/downgrade ports. In this case the game was extensively retooled and a lot of material was added, so it seems worth playing.

According to the manual and the box, this was an attempt to create a “Hard SF” RPG. They do seem to have put a lot of thought into this, since the system is different from other RPGs in a lot of ways that make the game more realistic. I’ve only played the game for 4 hours so far so I don’t have a lot of progress, but it will take a while to explain how the game works, so maybe that’s OK. (It also makes me glad I decided to buy a hard copy so that I could get the instruction book!)

The setup for the game is that in 2352, the ship Swordfish was attacked by pirates while on a mission. They had to use a hyperwarp jump of some sort to escape, but that left them stranded far away from Earth. Most of the crew is dead, and the ship is too damaged to make a long jump back to Earth. The main character is the person who has to sub in for the dead captain. Aside from him, there are only 23 survivors, 5 of which can pilot the Battle Modules (mechs).

At the beginning you can assign points to three attributes: Constitution (gives you more Life Points), Intelligence (greater hit percentage), and Speed (go earlier in combat and dodge easier). I assigned points evenly to each stat, but maybe I should have done differently. The other 5 characters have their stats pre-determined. One unusual aspect of the game is that these stats (and your life points) never improve throughout the game. They’re just a measure of the innate ability. What does improve are the Skill Ranks, on the bottom right. These are:

The main character has all 4 skills, but everyone else just has Combat and one other skill. When you level up, your skill ranks increase, although I don’t know what determines which one increases.

Other than Kurisu, we have Klein (fighter), Killy (fighter), Shine (scientist), Vindo (mechanic) and Nijina (medic). Kurisu always has to be in the party, but you can choose the other two freely.

On the ship you have five places to go:

Once you’ve assigned weapons to your Modules you can leave. Each time you leave you get 10 repair units and 10 healing items (the amount they heal or repair being dependent on your stats). You also get to refill the “option” weapons, which are weapons you can assign to the Modules in addition to the four main ones.

Each Module has various stats and types of attacks they’re good with. You can bring 4 weapons along and have two equipped at a time (unless it’s a 2 handed weapon), but you can switch weapons any time you want. This gives you a lot of options during a battle, and it’s important to switch weapons frequently depending on who you’re fighting.

The Bridge lets you jump to different places, and scan planets to see if there’s anything worth visiting.

At first you can’t jump at all, but after the first mission you can jump one square as long as it has a planet in it. That effectively confines you to the six solar systems at the top right. Once you reach a solar system, you can do a Short Jump to each planet to see what’s there. Most of the planets are uninhabitable and can’t be landed on. Once you find one that you can visit, you can land and explore. This might seem like you have a lot of freedom but you actually don’t — if you don’t have a specific reason to visit a planet, you can land, but MICA (the ship’s computer) won’t allow you to walk more than a few steps from the ship. So despite that fact that you can visit 6 solar systems each with 5 or 6 planets, you’re actually extremely restricted in what you can actually do.

Once you’ve identified a place to go, it’s time to leave the ship.

The first task is to repair the jump drive so that we can leave the initial world. There are two places of interest at the beginning — the town to the left which gives some information, and a crashed ship to the north. The ship is the Europa, a colony ship that left Earth 250 years ago but disappeared. The villagers in this town are the descendants of those colonists but have developed some myths about gods seeding the worlds with life. They also mention rogue robots that are plaguing the area. So our first task is to visit the Europa. Pretty quickly the combat system appears.

The combats take place on a 6×6 grid. Each turn you choose for each character where you want them to move, and what action to take. Then all the actions are executed. This can be problematic because if you move next to an enemy and try a hand-to-hand attack, if they move away that turn you lose your attack, even if you have a gun equipped. I guess the idea is that you already started to lunge at them with your saber or fist but they moved away. Same thing happens if you want to shoot an enemy but they move in your range. This takes some getting used to, and annoyingly it doesn’t seem to apply to the enemies.

The attacks show a small animation and then how much Life Points and Energy Points you lost. As far as I can tell, there’s no way to heal in battle, you have to wait until after. There are different types of damage (e.g. beam, heat, physical) and each enemy has its own strength and weakness. The battle system is pretty complicated at first and I got a game over early on, but once you figure out what’s going on it’s not so bad.

However, there is one huge, huge problem — the random encounter rate. This is a common issue with older console games, but it’s especially tedious in a game like this where each combat takes some time. I actually think the strategic combat in this game is well designed and interesting, but when every 3 steps has a fight, it saps my will to play the game. This is partly why I made so little progress this week — as I said, I’ve instituted a new rule where the first week I play each game, I will not make use of any emulator features or walkthroughs. Starting on Tuesday I can use the speedup key to get through battles faster, but until then it’s rough. And it’s sad to see such a promising system torpedoed by a ridiculous encounter rate.

The tedium was worse for me because I kept messing up and had to visit the Europa 4 times. I was supposed to go to the Bridge and try to jump, and learn that I need to take Vindo to the Europa because he’s the mechanic. I didn’t do that, so the first time I didn’t have him and had to go back. Then I had to leave because I got too wounded, then I tried to switch out a character and accidentally left Vindo behind, then finally I got the Coil to fix the jump drive.

When you return to the ship, if you did something to move along the plot you get bonus XP. Then you can repair and restock, and take any Neo Parts you got from enemies to the lab for analyzing. Since the designers were going for realism, you can’t level up the Battle Modules by fighting, and the enemies don’t drop money (nor do they pretend that the defeated robots can be converted at a standard rate to some magic currency that works everywhere in the universe). So the only way to improve your weapons and mechs is to recover Neo Parts from the enemies and have Shine analyze them in the lab. Some people on GameFAQs said that only the first two parts from each enemy have any effect; I don’t have confirmation of this but it seems to match my experience. So far all I’ve gotten are new weapons and increasing the hit rate of existing weapon types.

Once I recovered the Jump drive I was able to visit another place on the same world and defeat a robot boss, who was apparently masterminding the berserk robots on this planet.

The boss wasn’t very hard. The next destination is the planet of Traders, who give several leads by giving you offers to trade for various objects.

The first thing I need is a Red Crystal to trade for an improved Jump Drive so that I can jump past the initial 6 solar systems. Although I thought I talked to everyone, apparently I didn’t because when I got to the place where the Red Crystal is supposed to be, MICA won’t let me go anywhere. This is where I stopped, but I’ll head back to the Traders and try talking to everyone again.