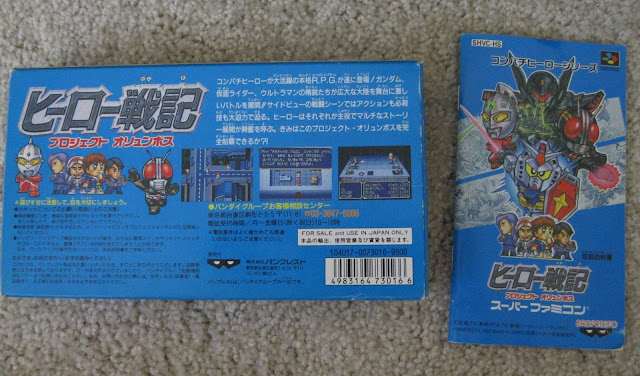 This is the first RPG in the “Compati Hero” franchise, a series of games that combines Gundam, Kamen Rider, and Ultraman. Prior to this game they were all action or sports. I’m fairly knowledgeable about Gundam (at least the series that were out in 1992), but I know next to nothing about Kamen Rider and Ultraman. That makes the franchise hard to fully appreciate — judging from the way Gundam is used in this game, I’m sure they’re using a lot of characters and situations from Ultra 7 and Kamen Rider, but I can’t appreciate this aspect of the story.

The character designs are “SD” (Super Deformed) style, which allows them to fit together the series without it looking ridiculous due to size differences.

Gameplay is pretty standard RPG, with a few special features. Each character has a free move they can use, although it’s not clear what they do — the instruction manual tells you to try them out to see, but I don’t like this kind of coy thing they did in old RPGs. I can’t check to see what they do until my 1 week is up so until Monday it will be a mystery. The other special moves use TP, but you can’t heal TP in town. Instead you get a few points back when you attack, and a substantial amount back if you kill something. This is an interesting change and lets you use your moves a little more regularly.

The beginning of the game introduces you to ZEUS, a group composed of Amuro Ray (Gundam), Kotaro Minami (Rider Black), and Dan Moroboshi (Ultra 7). They’re the main three characters in the game. The fourth spot on the team rotates. At the beginning it’s Gilliam Yeager in the Gespenst, a character who would later appear in Super Robot Taisen 4 and then the Original Generation games, and is still appearing. Here he is in 2nd Original Generations:

There’s also a running joke where Gilliam tells you to play Hero Senki; this made sense when he first did it in SRW 4 (for SNES), but now it’s just become a tradition. Gilliam has lost his memory; all we know is that his Alpha Squadron was destroyed.

The main purpose of ZEUS is to fight terrorists, who have conveniently appropriated all kinds of mechs and other things from the enemies of the various franchises (or in some cases the actual enemies have joined the terrorists). The graphics remind me of RPG maker.

There’s no explorable world map. Instead, to go to different places you leave out an exit and then travel on a road of some sort to the next location.

Our first goal is to take out the terrorists in a nearby cave.The battle scenes are typical RPG, but move quickly:

You walk very fast on the map and the random encounter rate is medium, plus there’s no inventory limit (other than a 9 item limit for each item). You can save anywhere. All of that makes the game fairly easy to play. Fleeing from battle is automatic but you lose one “konjo” point. They can be recovered at a hospital, but the effect is fairly small. It reduces the amount of HP you recover when you defend, but you gain so little HP from defending that it doesn’t matter. Supposedly it also makes it easier to get hit by certain status effects if it’s lower.

At the end of the cave are Char and Garma (from Gundam) who fight you but then realize you’re not terrorists. After this it’s off to Theis City, which I gather is something from the Kamen Rider series. The enemies here look like bugs or Mexican wrestlers:

Here we face off against the Shocker group from the original Kamen Rider, including Colonel Zol and Dr. Shinigami. The boss battles are generally manageable. Ultra 7 has a nice party heal tech. Regular attacks don’t do much damage against bosses but I’ve always had just enough power to squeak out a victory. This city involved an abandoned building that was controlled by Shinigami, along with hostages — but we can find a secret way in by getting the notes from the original builder. Gilliam gets trapped inside while trying to save a girl, so he’s not in our party for a while.

Finally we headed to Lhasa City, which is controlled by the Titans.

That’s all the progress I made this week. I apologize for not taking more notes on the story; since there’s no translation patch for this I should be a little more descriptive about what’s going on. I’ll do better on the next update.