I made two mistakes in discussing the gameplay last time. First, going back to a previous area does not let you fight the battle again. You can freely retreat from battles (as in Shining Force) but once you complete one, the map will be clear of enemies unless the story puts another battle there. Second, to enter a town and end a battle without beating the enemies, it has to be the main character that does it.

For the first part of this map, we have to head up to a mansion that supposedly has a person who is stealing women. 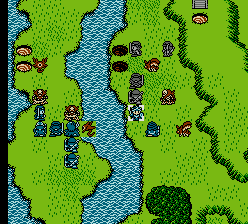 There aren’t many enemies, but there are a ton of monster lairs. It can be tricky to charge up to them quickly enough to fill them all without getting killed. As you can see, I split into two squads.

It turns out the guy was not stealing women, he was taking in poor and abandoned women, and he now joins our party as the third guy (one of his women was stolen by the same enemies that stole Feris and the others.)

The second part involves getting to the west town. I warped back to the first town to cut out some movement. It’s a pretty tough section, with lots of monster lairs. 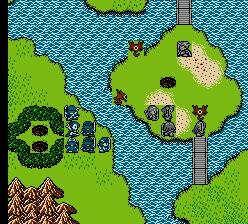 My basic strategy was to seal off the first Skeleton lairs near the town, then move left. Rolan’s squad went up to seal off the first flying lair while Orlof headed into the eastern area, with Kurisu back to deal with the skeletons coming up from the rear. Kurisu then went up to join Rolan while Orlof dealt with the monster lairs on the east side. Equipping all the archers with Boomerangs helped a lot; they have a 1-6 range in any direction (even diagonal). With this, I was then able to approach the strong monsters at the top from both sides, use boomerangs to take out the casters, and then whittle away the strong crab things.

Yay, no monster lairs! The monsters all rush us at the beginning. I got a lot of use out of the “marlo” spell that shoots arrows out in all 8 directions, hitting every enemy in their path. I lost the first time because I was dumb and sent out Kurisu near the front — there are enemies with boomerangs that can quickly gang up on someone. As long as you don’t do that it’s not hard. (I swear I took a screenshot but it’s not in the folder…)

The monster lairs are back, and no Rolan. This stage is not especially hard, but it takes a while. One of the lairs is out of the way, and spits out the boomerang monsters so I made sure to take care of that with Orlof’s party, while Kurisu supported with the boomerangs. Then I had Kurisu hold off the skeletons coming one at a time from the top while Orlof made his way back. With both parties active it wasn’t that difficult to finish off the stage even with the monsters blocking the bridge. 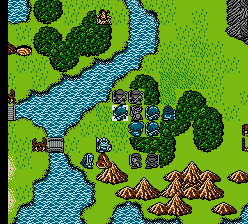 Rolan rejoins the team, and we have an interesting battle — a three level tower where you can only use the commanders. However, after each floor you can leave, and your non-commanders can cast heal spells and the like. I made sure I had the best equipment and plenty of Herb 2’s for healing. The first two floors are not too bad, although the second is annoying with its MP-stealing enemy. I used Orlof’s marlo attack spell a lot. 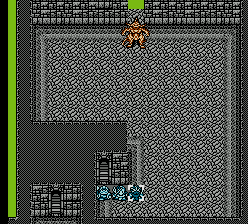 This boss can only be hurt by Rolan’s new freeze spell (apparently). At level 9 he had exactly enough MP to use the spell enough times to beat the boss; everyone else was on healing duty.

This introduces a bunch of new annoying enemies. They can roll towards you and hit any guys in the way. They stay where they end up, though, so they can be dealt with at least in this stage by slowly approaching them. 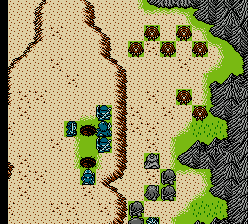 I took Rolan’s unit up to the left hill to deal with the monster lairs, and then kept them up there with boomerangs and Rolan’s freeze spell while the other groups went north and lured the rolypolys down one or two at a time.

Next we have to go to the same map to protect some people digging a well. After 5 turns they figure out it’s oil rather than water and return, but until then it looks like if they take one hit they die. 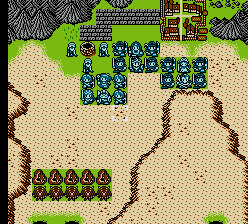 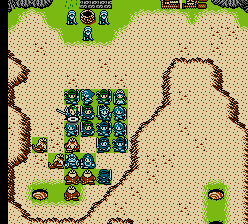 The monster lairs spit out these new monsters that shoot some sort of rock or cannonball; they can quickly take down one person by ganging up on them. I used a lot of magic (especially the spell that sends out three attack missiles). The lairs aren’t as bad as they seem at first because once you get near them, the monsters that come out of the lairs will stop moving off the lair. I ended up only losing one guy. Afterwards monsters start coming out of the other lairs so I just retreated back to town.

This battle is simple. One person (it may have to be the main character or his party) has to attack the rock areas near the town to make the water reach the town. 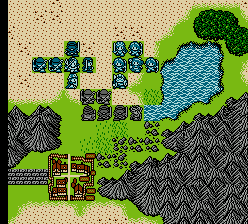 Everyone else can deal with the monsters that come down, but it’s only 12 total with no monster lairs, so they can be dealt with easily. There are annoying rolypolys up at the top but they don’t move so there’s no reason to fight them.

Back in the town we get the Winga medal, which lets us summon a thing that can fly us past the north walls. Using the medal makes it appear but start moving away. It’s to the NW of where we start. Moving up there is fairly easy and it can be reached in a few turns. Orlof got a powerful new spell that does a lot of damage to multiple units, which is nice.