On the way to the dwarf village we encounter a group of Dark Elves — despite the story making them seem scary they’re just basic enemies.

The dwarf chieftain initially refuses to help us but when Aks shows him the God Orbs he agrees to help, and gives us a bunch of armor and weapons. They’re just basic upgrades like Chainmail, so I’m not sure what makes them particularly useful against the dark elves. There was also a movement ring which I gave to the iron golem — he moves so slowly that I haven’t even gotten to make an attack with him yet; I’m not sure this upgrade will help much but he might get a chance.

There’s also a little event you can do in town (I’m not sure if it’s optional or not) with a wounded child. This gets me 20 healing herbs, and then a dwarf joined the party. Now we continue on to Crystoll Temple and encounter another set of Dark Elves.

I now have 22 units which makes the turns take a while. This is a really long fight because of how long it takes to move everyone and how many people do 1 damage. This is a general problem with this game and it’s exacerbated by the way the XP system works. It seems to me like your XP gains are partly dependent on the amount of damage you do, which means weaker characters have a really hard time catching up.

After this, Aks makes it to the port town that will take him to Crystoll Temple. But the ship only holds 10 people, so you have to select who to bring. I took my highest damage dealers, and a magician and priest.

On the other side of the ship, there’s a black fog that separates Aks from his companions, and all four Shitteno are waiting for him. 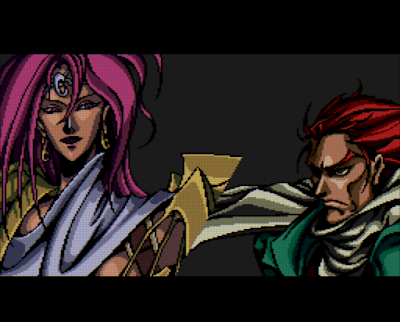 He’s ready to fight them all, but… 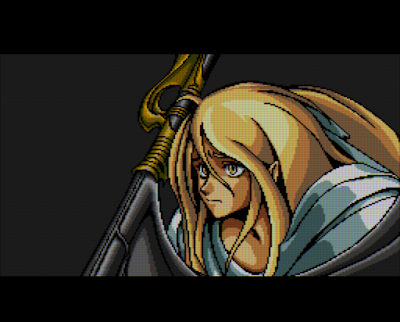 Arselia is there, and they threaten to kill her. So they start beating Aks up and he doesn’t resist…but then they kill Arselia anyway. This pisses Aks off so much that some light energy comes out of him and gets rid of the black cloud, bringing in the companions.

You would think a fight against all the Shitenno at once would be difficult, but it really wasn’t. Partly this is due to the horrible AI, which made the Shitenno hardly move and sometimes not use spells even when they were in range. But also they seem to be the same strength they were when you first fought them. So Gazes, the first one you fight, is incredibly weak. 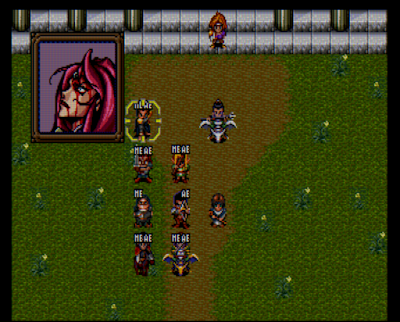 Once the fight is over, Aks apologizes to Arselia’s corpse…. 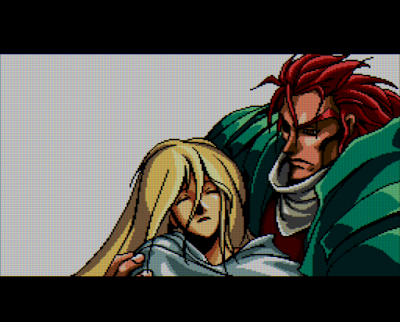 Except she’s still alive! The dragon gave her protection against the Shitenno earlier in the story, so this protected her. She an Aks share a romantic(?) moment. 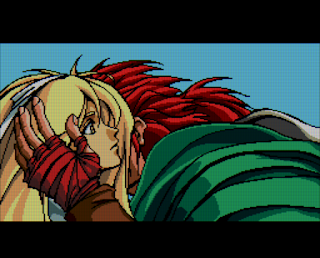 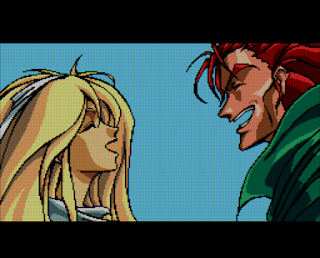 She then opens the temple for us, and Aks has her go back to her village while he goes in. No battles here, but Aks receives the Holy Sword from a goddess who watches over those from Aks’ village. He isn’t sure why someone who is the son of the devil can use the Holy Sword, but the goddess doesn’t have answers. Aks heads back and picks up all the party members, as well as two new Holy Knights from the temple — they’re helpful because they have healing spells.

From this point on we have all 24 members but the game never gives you enough equipment to make using them all viable. In the last set of battles I basically used a small party of Aks, Ganesha, and the ninja guy for damage, Mute for magic damage, all the healers, and then the dragon knights and horse knights in cases where I needed to charge ahead and take out magicians before they could do too much damage (or to do the last 2-3 necessary to kill something). I also got another MP restoring ring which meant I could use the other magician as well.

Aks heads towards the cave leading to Dark Castle, and meets Arselia along the way, who tells him that there’s another evil power in the castle besides Balgas.

Next up is a series of 4 or 5 grunt battles as Aks makes his way through the caves to Dark Castle, and then the castle itself. None of them were particularly hard; with all that healing and the powerful attacks of Aks and Ganesha, plus two magicians with MP restore, the enemies are quite easy. 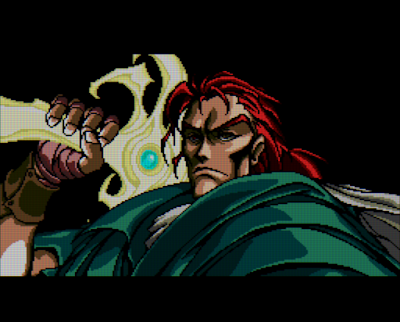 Balgas threatens the party, but Aks just retorts that Balgas is a plaything of his dad. And that seems to be the case since he has low HP and is no harder than any other boss in the game (he has the same HP total as the first boss in the second stage of the game). Balgas does indicate that he’s serving some other boss than Aks’ dad but doesn’t explain further.

After the battle, Aks sends Balgas’ spirit back to the demon world, and then you get a chance to talk to one party member (with a voiced sequence). Aks says he has something else to do, and then goes back with a small party to a warp zone behind Balgas’ throne. 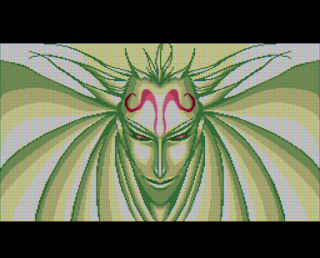 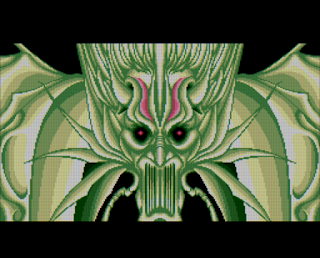 This is Lucifer, who serves Aks’ dad Satan(!); he initially pretends to be congratulating Aks but then declares he’ll control the world, etc. The fight is not very hard because Aks is ridiculous and you get two healers. Aks then decides to use Satan’s power one time to banish Lucifer.

Aks now returns to the mainland and begins to live a quiet life with Arselia, which includes sex because this is on the PC Engine. 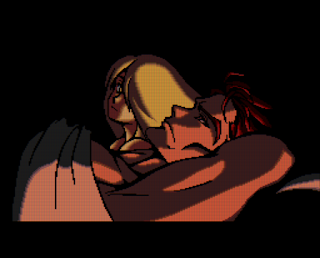 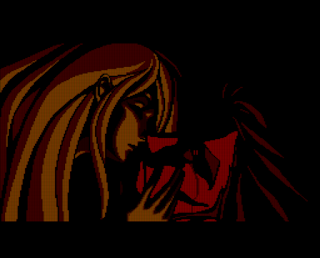 But after a while Aks decides he needs to go settle the score with Satan before he can live in peace, and leaves Arselia in the night, saying he’ll be back. She cries and the game ends — nice happy ending!