After destroying the Dark Dragon weapon, Maneelo is given back his “merchant jewel” which allows him to transform into a big fish. Now I can cross some areas under the ocean that I couldn’t before. With no clear direction I just looked for any place I could surface, which put me out at the Wind Village, where everyone was acting strangely, apparently due to a flower spewing out pollen above. It doesn’t affect our characters, so we go into the cave to face the first of the Four Kings, Kyura. He turns us all tiny, and now we have to go help some mice beat cockroaches.

I’m not sure what the point of this section is, but somehow the mice reward you with medicine that makes you big again. Unfortunately Kyura has turned one of the townspeople into a monster, and Dees requires some toad saliva to heal him. At this point I took a side detour to pick up the second set of transformations for the main character, then got the toad saliva (which requires giving him a bug). Now we can heal the villager, stop Kyura’s plans, and restore the village to normal. The grateful townspeople fix the bridge, and Kyura comes up for his final fight.

The next location is a town of moles. One of them is sick and we need to find a dream mirror to go inside and help him — this requires going to the Music Kingdom where they only speak in music. The moles give me something to understand them, and the Wind Village has a flute that I can use to speak.

The queen or princess of the Music Kingdom wants to hand over the Time Key to Judas because she’s so obsessed with him. We can’t really stop her, but we can peek in on her when she’s in the bath to get a secret code to steal things from their chests (I swear they asked me to do this!!)

Now with the dream pillow it’s time to enter Mog (the mole)’s dreams. This is a trippy part of the game where you have to find parts of Mog’s personality, especially the “heroism”, which finally lets you beat a boss inside the dream and escape.

Now with Mog in the party I can dig up these signs that I saw around the world. There are also dragon plates on various areas but I never figured out how to move those (looking now, I needed to find some transformation for Dank that would have let me remove them; I never did that.)

Next up is the Spring Village. I’m looking for the Heaven Key although I’ve forgotten why I want to collect these keys — it’s what I’ve been doing most of the game but I don’t remember actually being told why. Maybe I just forgot. Anyway, in the Heaven Tower, the next of the Four Kings, Siegmund, sends us into a dream world.

The dream world has another tower. Several of the dungeons in this game have annoying features in them like stepping on circles that make the walls invisible or spin the dungeon around. I’m not a big fan of these kind of tricks; it seems just to add frustration, not fun. Finally at the top of the tower we face Siegmund.

He has a strange sprite in that it starts as just a few huge pixels, but resolves more and more into a shape as you damage him. He also switches back and forth whether he takes damage from magic or physical attacks, so the main character can’t just stay transformed the whole time. I also switched out Dees for Bilda when necessary.

Next on our journey is Cham village, where time has completely stopped. One guy is still walking, and wonders if the Time Tower nearby is the cause. Indeed at the top of the tower is Carla, the next of the Four Kings.

She immediately warps us out of the tower. Back in Cham, though, her childhood friend Elan decides to go to the tower by himself to talk her out of her evil ways. Time to go through the tower again (sigh) and fight Carla. The fight doesn’t last very long, though, since Carla sends us out of the tower with her timespace powers and retreats to a nearby castle. Now Elan tells me where to get a fruit that Carla really likes, and with that we enter the castle, confront Carla, and Elan is able to recall happier days with her as a child. Unfortunately the fourth king Goda shows up and kills Carla, but somehow by using the Time Key, Cham’s time starts again and Carla and Elan are reborn as children. Who knows.

At this point Nina has been aged by the Time Key but lost her memory, and I have to gather materials to get a medicine to restore her. But I’m not sure how I was supposed to know where to find all this stuff — it involves fishing in a specific place and hitting some specific trees. I used a walkthrough but do they really expect you to go all over the world to find this stuff? Or maybe I would have already found it if I fished everywhere and hit trees? Anyway, now that Nina is back, and older, she has a new face portrait and can transform into a bird. This is the typical RPG situation where late in the game you finally get an airship or the like that lets you go everywhere without encounters.

Now we can go everywhere in the world, including the final area. I got all of Kurisu’s final transformations although I used a walkthrough to do so. The “last power” transforms everyone into a big dragon that does 999 damage with its attack, making the rest of the boss fights fairly easy. But you need this to get the “good” ending. At this point you can also get some good items at the flea market and more of Dank’s transformations but I wasn’t following a walkthrough step by step so I didn’t do any of this. The next real destination is the capital city.

In the capital, we first have to do some fetch questing to activate the elevator, fortunately the slaves in the capital provide some clues on where to go. Once the elevator works, it’s on to the dungeon.

The dungeon is not especially difficult, and at the end we meet Zorgon, the leader of the Dark Dragon Clan. Clearly this is not the final fight since Judas and the fourth King are still around. It’s a long battle, though, and the 0 hp state of the boss lasts a long time.

…but she’s actually just an apparition created by Judas. She manages to take all the keys I’ve collected and release Milia, the Goddess of Destruction. I’m not real clear on what’s going on here — was this ever mentioned before in the story? Obviously a lot of RPGs have a surprise final boss but I don’t remember hearing about Milia before. In any case, Judas heads off to a tower, and in the tower Sara, who apparently is now actually alive but under enemy control, turns into a dragon and fights you as “Sister Dragon.”

Once she’s defeated, she breaks free of Judas’ control and dies. Now Judas goes to a floating castle along with Milia. The castle has no obvious entrance but there’s a place on the ground where it looks like Mog can dig. This is another place where there’s no clear indication of what to do. You have to go to a woman’s house that you can only access with the Nina dragon, and exchange letters between her and a weapon-loving man from earlier in the game. Eventually he gives us a powerful claw which Mog can then use to burrow into the final dungeon.

The final dungeon is not particularly long or difficult. Goda is the first boss, who is easily defeated with the Final Dragon. Judas is up next, as usual turning into a monster.

Once Judas is defeated, Milia is there alone. She behaves strangely and this is where the endings diverge. To get the good ending, you have to use the Final Dragon transformation which will then get her to reveal her true form.

The fight is long but not especially hard — in Final Dragon form it’s just a matter of healing with the full-HP restore items every so often and attacking for 999 every round. The ending is pretty short and even after looking at the “bad ending” on youtube I’m still not really sure what makes it bad. They both basically have the same content — you save the world, and everyone goes back home. I guess the “good ending” is a little more detailed and the spirit of Sara congratulates you, but it’s still basically the same ending.

Someone on GameFAQs claimed that one ending leads to BoF2 and the other to BoF3 but they seem the same to me. 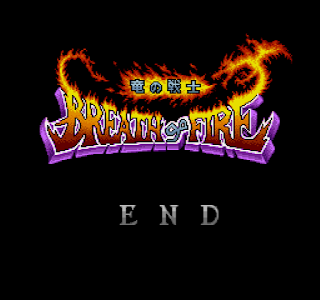 Overall that was a pretty good game for this time period. In the overall scope of the entire SFC library it probably won’t end up as one of the top classics, but of the 23 games I’ve played I would rank it second best after Dragon Quest V. Unfortunately next up is another kusoge that is known as one of the worst games in the SFC library…I guess I got a respite with Breath of Fire but it’s back to the grind.