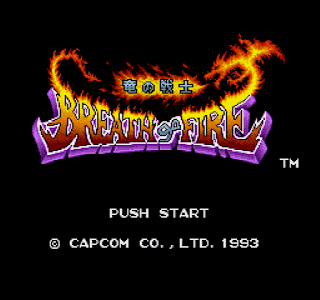 So this is probably the most well known game I’ve covered on this blog so far. I’m not sure why I never played it when it came out — it may be that by this point I was already more into computer RPGs than console ones. It’s possible I rented it and played a bit of it but I don’t think so.

I played the first sequence and then watched the English on youtube and from what I could tell the translation is pretty good. Of course the biggest flaw is the space limitations on the names. Any name that is above 4 characters is changed (e.g. Gilliam becomes Bo). The items often have inscrutable names because of space limitations, so that Iron Rapier becomes IronRP and Tears of Bem becomes T.Drop. The oddest ones are names that sound like debug menu names in English (Mrb13 instead of Protection Smoke). I think this was true in Paladin’s Quest (Lennus) as well. I always wondered whether this was primarily rushed and underfunded localization or whether there are actually serious problems in trying to expand the space for the names.

Moving on.  Overall this is basically your standard RPG of this period; I notice that the game has not aged well and a lot of people criticize it now. I can understand this, but having played the previous 22 games on this blog I can really appreciate how good this is compared to the other games available at the time. Sometimes games don’t fully engage me through the entire experience, but as of now this is shaping up to be the best game I’ve played on the blog next to Dragon Quest V.

The graphics are pretty good, as is the music. The interface is great, and you can assign all the buttons different functions. Unfortunately the walking is very slow and there’s no dash button. The nearby town has a haunted castle that the king wants you to clear. This is a nice easy starter dungeon with a lot of HP restore places and a boss that’s not too bad.

The battle system is the typical attack-magic-item-defend (AMID?). You can see enemy HP but bosses always have some extra unspecified HP after they get to 0, and often once they get to that point their attack patterns change or become fiercer. So there is still some uncertainty in the system. The first major goal of the game is to get a ship so we can get off the first island. This game is big on nested fetch quests — that is, you need A, but someone wants B to give you it, but then you need C to get B, and D to get C, but you have to pass E’s trial to get D, etc.

Nanai is a hostile town so I have to enter at night, and avoid the soldiers as I make my way to the castle here, to stop something that’s causing earthquakes. The boss inside is a Knight, who isn’t that bad if you throw all your damage items at him.

The entire town is destroyed by an earthquake after this, and all Kurisu can do is proceed to the next town, a town of winged beings. Here I am unable to meet with the king because he’s gone, although I overhear that he’s actually sick instead. Kurisu goes to sleep and the game switches to Princess Nina, the king’s daughter, along with two knights that accompany her to find a medicine for her father.

Nina is a healer-type character but also gets an early attack boost spell, which is a big help. Her story involves several dungeons, but eventually she reaches the tower where a magician holds the medicine that can help her father.

Unfortunately Nina gets her butt kicked because the magician uses some fog that saps the strength of any winged being. This means that Kurisu has to come in to save the day. Fortunately one of the soldiers flies Kurisu to the top of the tower so you don’t have to do it all over again (why couldn’t Nina just start out with that?)

Kurisu easily defeats the magician, saving the king. Now he is ready to move on to the next area, and Nina decides to join him. Next up is Tantar town. We’re closer to getting to a place that has ships, but a rock has blocked up the river here and the bridge has been destroyed. Tantar town has wolfmen, and Tontor has humans. We have to head out to a forest dungeon to try to see if we can remove the rock.

The boss is Pochi (translated as “pog” in the English version; they should have used a stereotypical dog name like Rover. Once Pochi goes down we get the third party member, Gilliam (“Bo” in English). He’s a wolfman archer with some helpful spells. Also if you put him at the front of the party, you can walk through forests and shoot the animals that you sometimes see on the world map. This is one of the few distinctive features of the gameplay. It looks like to move the rock we’re going to need to re-activate an ancient stone robot, so it’s off to the floating city to get the key. But to get to the floating city we need a stone tablet from Romero village, a village of zombies. The person there won’t give us the tablet unless we get Cleansing Water from an underground cave to cure the zombies. Phew. After this Russian doll of fetch quests, I got the key and headed to the stone robot.

Now with the robot, we can blow up the rock and restore the river.

The Black Dragon Clan steals the robot and blows up the human town. We have to get in again and take control back. The robot has a very tough boss fight — mostly because the Gremlin, when brought down to 0 hp, has a large amount of reserve HP and starts using his multi-hit attack every round. I saved most of Gilliam’s spells until then and used some of the heal-all items I had picked up along the way, and managed to beat him in the end. After this, the robot decides to sacrifice himself by going into a volcano, which spills lava out that dries up and lets us cross the next river (building a bridge doesn’t work?)

I think I’m going to stop this post here; I’m somewhat past this point, but if posts are too long they get boring. I’ll write several posts this week to catch up to where I am.