[Updates may be sporadic over the holidays. I should be able to return to regular Saturday updates on Jan. 13]

This game reminds me a lot of Villgust. It has the same feeling of a development team assigned a game as a money making venture without any real idea or passion for the task, and making the most basic, unimaginative game they can. This game is not as bad as Villgust, but it’s just as methodical and cookie-cutter. Like some of the other games I’ve played, I think a step-by-step account of the entire game would be just as boring as it is to play it, so I will hit the highlights.

The game is entirely one path, always obvious where to go next. There are only one or two places where you have to do anything but just walk to the next place on the map. The dungeons have a bit of exploration but it’s mostly just for treasure chests that often aren’t that useful — one other lazy aspect of the game is that all the equipment in the game is buyable. There are no optional quests, events, dungeons, or anything of that nature.

The story also lacks the humor and interest of the original manga. The credits indicate that Rumiko Takahashi had nothing to do with the project, so basically the scenario writers were just trying to copy her style, and it shows.

I still had two treasures to get. The next one is the Sakura Sword, and we have to fight through Mousse, who is being controlled by the enemies, and Ranma’s father, who has just joined the enemy because he was promised a harem.

One thing I did forget to mention about the battle system last time is that you can hit X to go into a “brawl” auto battle; it seems to prevent the enemies from using their special moves, which can sometimes be useful since they do a lot of damage to all PCs. But you can’t get out of it and it can’t be used against bosses.

My basic party was usually Shampoo (for buffs), Akane (for healing), Ranma (for damage), and then a fourth character to do more damage, but you can’t pick the party until the end of the game.

In the course of getting the last treasure, we fight other characters from the show who are controlled by the enemies, and then Suzaku, the second of the four kings of the enemy group. The principal of the school then takes all the students back to the real world and takes us to the next area. Here after a sequence of dungeons we end up bringing the three treasures to an altar that gives us the Star Crystal, but the leader of the Red Cat Gang uses it to become a god instead. So that will be the final boss.

The last dungeon first has us fighting previous bosses again in powered-up form, then the final boss. 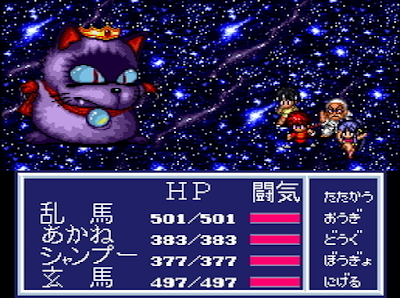 This was the first game over I got. You first have to use an item to remove the crown and cape (temporarily), then you can hurt him. I used a powered-up Ranma and items to heal and restore his technique power. He has a lot of HP and in the end I had lost most of my units and items, but I did manage to beat him.

Then Ranma goes home, the end. 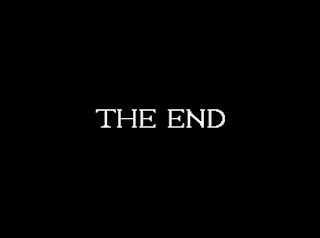 As may be clear now, I do not recommend this game. It’s not likely to appeal to fans of Ranma, or fans of RPGs. It’s definitely not the worst game I’ve played, as it doesn’t have any serious bugs or major design flaws that make the game hard to play. It’s just dull, methodical, and shows very little spark of originality.

Next up on the list is Arcus Spirits, but this is not an RPG, so the next actual game will be Super Chinese World 2 (a game in the series that was localized as Ninja Boy).