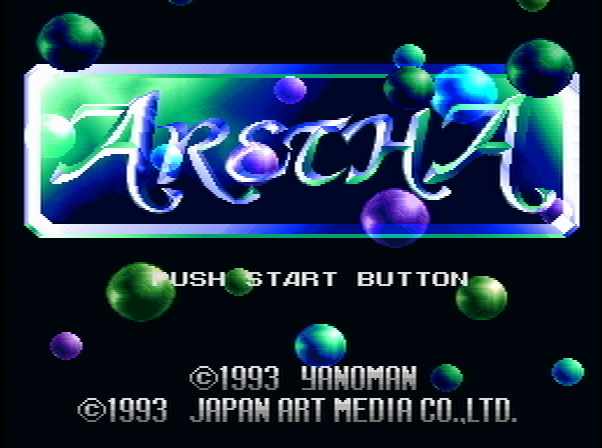 I’m not especially happy to see Yanoman’s name appear again; they were responsible for Song Master, one of the worst games I’ve played on the blog. Aretha, fortunately, is nowhere near as bad as Song Master but still has some strange gameplay decisions.

The Aretha franchise consists of 6 games — three for the Game Boy, and three for the Super Famicom (the third game may not be an RPG, it’s an action game that’s right on the borderline of ARPG but I’ll evaluate that when I get there.) There is some connection between this game and the GB games but not having played them I can’t say how much of a connection there is. From what I’ve read, the GB games had a monster recruiting system. This was removed in the SFC game and replaced with a system where you get “soul” crystals from enemies that can be forged into items.

The game begins with the heroine, Ariel, having a dream about a castle getting attacked. She wakes up, and gets sent on a small errand by her grandmother, to deliver medicine to a nearby village. If you ever forget what to do next, you can choose “talk” from the status menu and the characters will tell you.

The first fights happen in the forest. 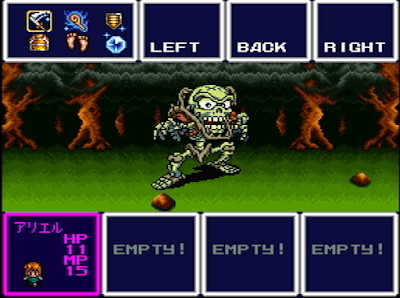 The monster graphics are colorful and detailed. It’s a back AMID battle system — fortunately Ariel has enough MP to actually use spells (and MP restoring items are cheap). You have to use magic to learn new magic. The other quirk is the “left”, “back”, and “right”. Enemies can appear from all sides. You can switch with the L and R buttons. This doesn’t have that much of an effect; from what I can tell, enemies don’t attack better from behind, for instance. The only significant gameplay effect it does have (besides lengthening the combats) is that area affect spells often only affect the group you are facing.

The random encounter rate is medium for a game of this era. The monsters give good XP, though, and levelling is quick. Once you have levelled a few times in an area you can dodge most of the attacks from monsters and flee from most combats, so the encounters don’t bog the game down as much as some other games do (although it still takes a certain amount of patience).

One really bizarre design choice is that there’s no indication of how much damage you do with your attacks or spells. The game is so easy this isn’t a huge deal, but sometimes I just don’t understand what the development teams are thinking.

Ariel hears about a kid named Jack who is missing, and delivers the medicine. On the way back, a small gnome runs into her and drops his bag, picking up hers by mistake. Following after him, Ariel finds out that Jack got his hands on a cap that lets him control the gnomes. She gets it back from him and gets a green egg as a reward…that hatches into a dragon.

The game now moves some years in the future, with Ariel and Fang (the dragon) grown up. 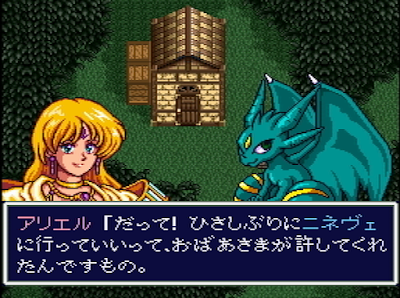 Ariel heads to the town again, but an old man wants an escort to a nearby mountain. She agrees even though her grandmother told her never to go to the mountain. There, the man steals her “Aretha Ring”, and shuts her up in a cave.

Ariel rescues a magician named Doll from a crystal (apparently Doll is from the GB games). She(?) is able to help them escape, but when she gets back to the house it’s been destroyed and her grandmother is gone. Ariel heads to the town again to find out what the “Aretha Ring” is. Apparently there was a goddess named Aretha, and an Aretha Kingdom, but it’s now been taken over by the Vandal Empire. Ariel decides to set out for the Aretha Kingdom. To help out finding it, she recruits a guy named Maddock. 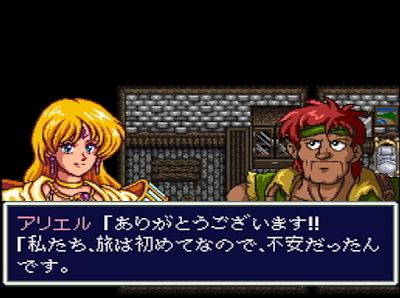 The group sets out by ship. At a harbor stop, Maddock goes out for some business and Ariel follows him.

It turns out he’s talking to an old man who offers the first use of the soul forging system.

Unfortunately it’s a rather underwhelming system. You just pick how much of each soul you want to use, but there’s no indication of what you’ll make or even what the various souls mean (other than their element). You can get really strong stuff for just a few souls — I’m not using a guide and I still managed to immediately get stuff that was double the defense or attack of what I had.

Ariel continues her journey through several places; one of them is a castle town — you can’t enter the castle, but you hear about knights who want to fight the Vandal Empire. One of them ends up dead in the next mountain, wanting you do something (but at the moment not clear what). 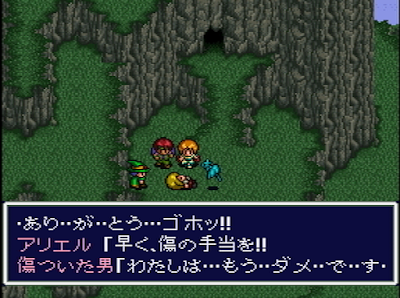 After crossing over several mountains and taking ships, we finally arrive at a town in the old Aretha Kingdom. But since it’s been taken over by Vandal, there are a bunch of enemy knights there. We get out quickly and head for a nearby “Aretha Temple” that’s supposed to be haunted. Although the temple is ruined, there is a priest there who tells us about the 4 Aretha Rings that have been stolen. It’s quickly obvious that he’s a bad guy trying to get information out of us, and when we can’t provide it, he sends us to Baron Zareos. Zareos seems to have taken control of Doll, and Fang is nowhere to be found. 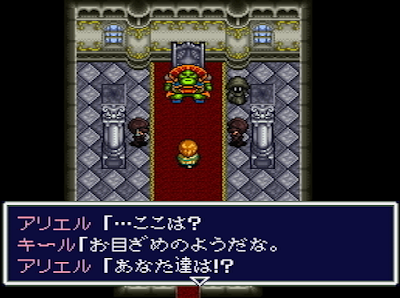 He also wants to know where the other rings are and shuts us up in a dungeon. Fortunately a young woman Marie saves us, although not revealing who she is at the moment. 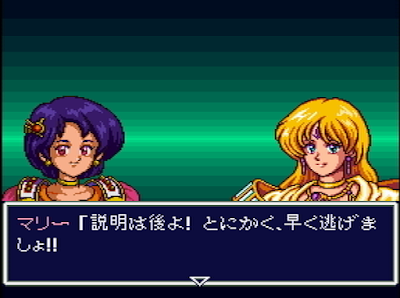 After letting us out, Marie along with two companions leaves, and the old man tries to attack Ariel again, only to be fought off by a swordsman. 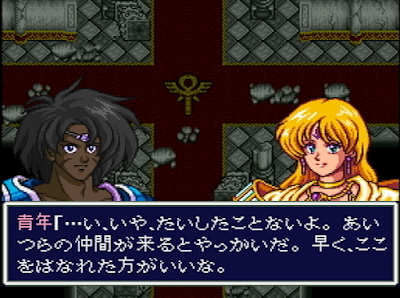 This is Kyle, who joins the party. Fang is in a nearby town — a little girl had adopted him and made him promise to stay forever, but she lets Fang rejoin us as we leave. Ariel decides to return to Listhorn where Maddock is, to try to find the rings. They stow away on a ship and get discovered, but a nobleman named Darahyde who is entranced with Ariel’s beauty saves them and joins the party. 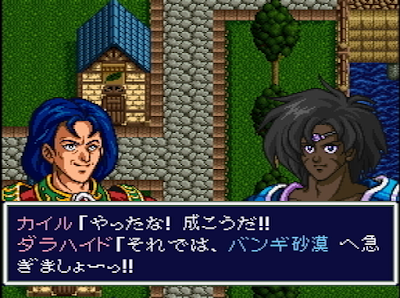 The party is heading to Bangi desert where they think the rings might be — this requires a lot of backtracking and new places, but eventually we reach the temple. Indeed, Ariel’s cold ring is there, as well as a Silver Ring that is immediately taken by a woman Layla, who looks a lot like Ariel. A long lost sister?

Now Ariel could go back home, but she decides that she needs to find the other rings to learn the secret of Ariel Kingdom and perhaps find her grandmother. She has no lead, but has a dream that night where a voice tells her to seek the Elemental Dragon on the Holy Mountain. Off on another journey, and this seems like a good place to stop the first post.

On the gameplay side there’s not a whole lot to say — I have been learning new spells with Ariel, and finally got a group effect spell that makes the fights somewhat easier. But as with a lot of these early games, it’s mostly just hold down the attack button on all the fights.