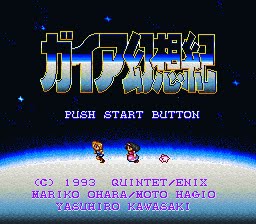 This is a spiritual successor to Soul Blader (Blazer in English), and the second in the loose trilogy that ends with Tenchi Sozo (Terranigma). I played this game when it was first out in the US and really liked it, and I played it again some time ago and liked it then too. I still liked it after this replay, and the storyline that I always liked is especially impressive now that I’ve seen what else was coming out around it.

I did some spot checking vs. the English game script, and the translation seemed reasonably accurate. There is the usual Nintendo censorship, with references to alcohol and religion removed. Some names are changed (for instance, Tem->Will, Peggy->Hamlet, Rob->Lance). The ending sequence seems very slow in the English version. This happens a lot in localizations because Japanese requires fewer symbols than English does to express the same thing, so a reasonable text speed for Japan becomes a crawl in English if they don’t do any changes.

One thing I wanted to do in this playthrough is get all the 50 red jewels — this opens an optional dungeon that features a boss from Soul Blazer. I had never done this in any of my previous plays; it’s very difficult to do without a walkthrough. I believe this is only the second game I’ve played on this blog (after Dragon Quest V) that had an optional “superboss” dungeon.

I’m going to write this post more as a review than a step-by-step playthrough; this is a game that I think everyone should try, and it’s not especially long. 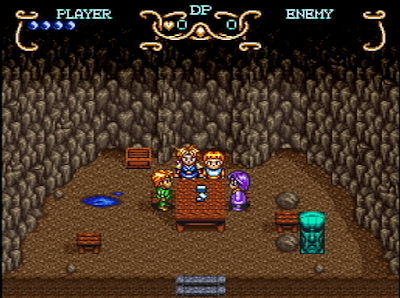 The game begins with Tem (Will) and his friends. Tem’s father went out adventuring, seeking the Tower of Babel, and never returned. Tem has some sort of psychic power. Soon he is called to Edward Castle to surrender a ring his father had left him, and once there, he gets thrown into prison. The voice of his father calls to him, telling him to seek out the six Mystery Dolls (Mystic Statues in the localization) and then come to Babel. After the princess Karen rescues him from the dungeon, you face the first dungeon. 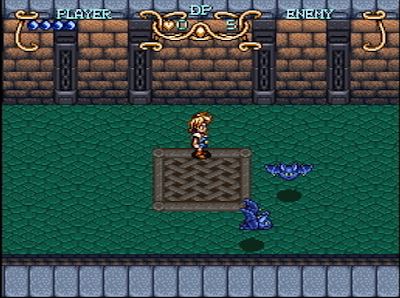 For the most part the game is very linear. Tem attacks with his flute, and gains several power ups during the adventure. Beating all the enemies on a screen gets you a stat upgrade (HP, Strength, or Defense). This means that dungeon areas are often quite tough when you first get to them, but once you clear a few areas and get some of the stat ups, they get much more manageable. Soon Tem is able to transform into the dark warrior Freedan. 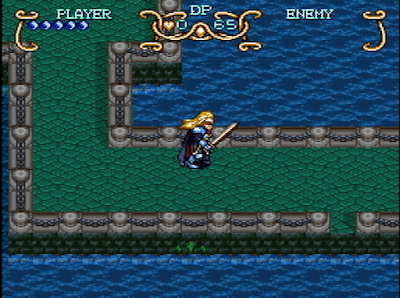 Freedan gets his own powers throughout the game. Although he is more powerful than Tem, sometimes you need Tem’s abilities to progress through the game, and you can only transform between characters at certain specific save points.

One great thing about the game is the variety of locations. The world seems oddly Earthlike without actually being Earth, and you visit the ruins of ancient civilizations like Angkor Wat and the Nazca line drawings. 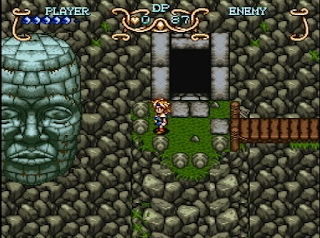 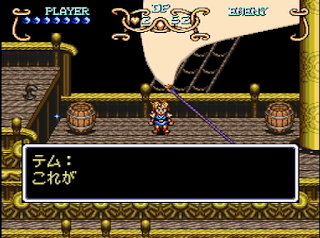 There are also extended story sequences, like when Tem and Karen spend many days on a raft floating at sea. 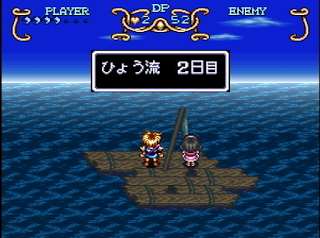 All of this gives the game a much bigger scope and richer experience than other RPGs were offering at the time, even if it isn’t great by later standards. The ending stayed with me for many years after I played it, especially with the great BGM:

The gameplay is a bit light on the RPG elements; there are no experience levels or money, and no equippable items. You just progress in stats by clearing rooms. This, plus the relatively linear gameplay and almost total lack of backtracking, sometimes make it seem more like an action game than an RPG, but it’s still a lot of fun.

This is a game I suspect some people reading this have played, so let me know about your memories or thoughts on the game.

Quintet would follow this game up with Tenchi Sozo (Terranigma), which is a masterpiece by any standards; one of my favorite RPGs of all time. I’ll get to that eventually, but up next (after I finish Just Breed on the other blog) is Soul & Sword, an RPG that seems somewhat Romancing Saga-like.