Unfortunately I didn’t quite finish the game this week.

This was a convenient time to do another timed quest, where you have to go to a village between 2/1-2/10. They need sacrifices to give to a pirate gang, although it’s not really clear why they want them — just to sell into slavery or something like that, but that seems like a strange thing to ask for once a year. In any case, we agree to “get captured” and then break out and beat everyone up. 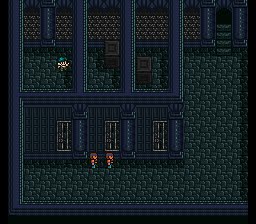 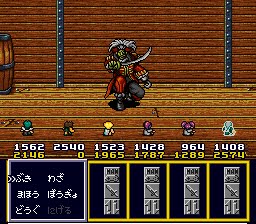 Once the thieves are beaten, we find their treasure as well as a map to their hidden treasure down south. I headed down to the town where I can get a ship to the island, but first I decided to take out the thieves in a nearby forest.

The thieves steal all our clothes, which makes Runna so mad that even when you beat the leader and he asks for forgiveness, you have to fight him 5 times (because Runna refuses to accept his apology) before you can move on. Coming back to the area reveals some new treasure, including something for the Collector quest and a “black box” which opens up a new quest with an upside-down castle that I had visited before but couldn’t enter. 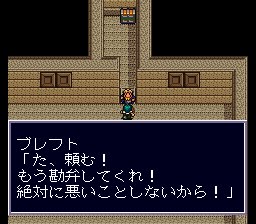 Before going to the castle, I headed out for the pirate’s treasure. It turns out to be an Ocean Bead, which has no obvious function now. There was also a Fairy Doll in the cave, which the kids want to keep — it sounds like this will also be something important. But we do have to fight both pirates again: 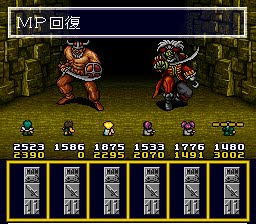 This is actually kind of hard because the guy on the right uses high-damage spells and attacks that hit everyone, and he heals. I did finally get enough stats to use one of the healing weapons, so that attacking someone on our team with it heals them (there’s no healing spells or techs so this is quite helpful).

Now on to the upside down castle. I’m hoping to beat the fighting tournament in the next cycle (year 3).

This is a long dungeon with a bunch of strange levels; it turns out the “castle” is a spaceship and we help the guy by returning his black box so he can leave. 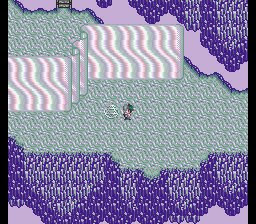 Now I headed up to the desert near the starting town. Here, the two kids find some ants that they think are in trouble — sounds silly but it turns out they are, and the magic of the queen turns us small so we can solve their problem with the Antlions. 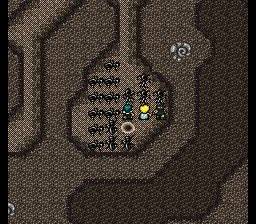 Once we solve their problem, it’s back to the surface, and the Queen rewards us by telling us how to get the treasure in the nearby tomb.

This is a short dungeon, and after fighting some mummies I got the Air Bead — I now have two beads, presumably there’s a fire and earth one as well.

This is a quest I probably would not have found without a walkthrough. You have to borrow the maximum amount from the lender (50000 gp) and then return it with 10% interest. You get an Antique Doll as a reward. I read that I had to do this but didn’t know what the ultimate quest would be, so I was surprised when I rested at the Istray inn and woke up in a ghostly house. 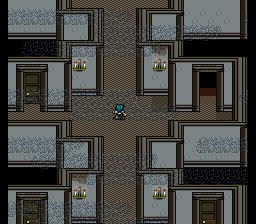 This is a creepy, atmospheric quest that tells a ghost story — the main problem is the high encounter rate. It’s impossible to sustain the creepy mood when every 5 steps you’re thrown into another battle. This was a fun quest but I wish they had disabled encounters for here, at least.

This quest takes 50,000 gold to pay a guy to tell you the location of the Wyvern’s mountain. Once there you have to beat some enemies in a certain order, and then the path to the Wyvern itself opens. 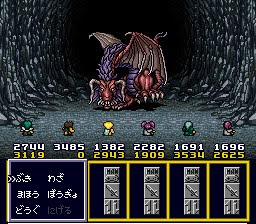 The Wyvern’s treasure turns out to be the Rainbow Bead, the third of the four beads I need for what seems to be the “final” quest (in a sense).

The Wyvern’s dungeon had an Elixir DX in it so I was able to go back and finish the Collector quest, which gave me 300,000 gold! (Quest 25)

Like Quest 23, this one could have been really good. It’s a humorous parody of “beat the demon king” RPGs that actually is pretty funny in parts. The big problem is that it’s by far the longest quest, with relatively large dungeons that you have to walk out of after you do your task there. The very high encounter rate saps most of the humor that you feel in the quest itself. 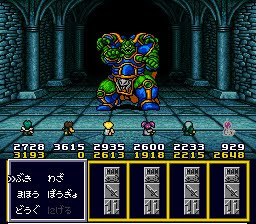 But it’s still enjoyable in parts. There’s a lot of good equipment that you can only buy during this question, so I was happy for the 300K I got from the collector.

Finally I went back to do the fighting tournament, which is necessary to unlock several other quests. I don’t think they scaled the enemies in the tournament to your stats, because I completely demolished the fighters — maybe they didn’t do that because it’s an important quest. I forgot to even get any screenshots. The guy you beat in the last round gives you a treasure map, and also there was a person in Istory who wanted help but wouldn’t talk to anyone but the tournament winner. I’ll go there first.

The guy wanted me to train his son, which just involves fighting monsters in a tower until his strength gets to 25. Then he can open a door and please his father. 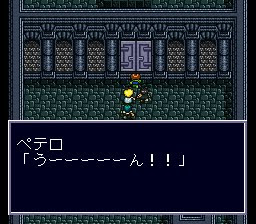 I realized that I forgot to include an earlier quest where you find a criminal in a random pub around the world, so that’s Quest 29.

There are five more quests left. I’m getting a little tired of the game but I just upgraded to bsnes 107.3 which has a faster speedup, so that will help with the random encounters at least. The game is much easier when you get a healing weapon.