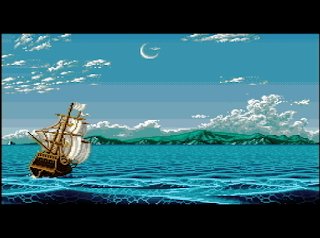 This is an attempt at a freestyle RPG in the tradition of Romancing SaGa. Like RS, you have a choice of a bunch of different quests to do and the strength of the monsters is based on the strength of your characters. The basic idea is that your character goes to the island of Volcanov, an island that’s known for attracting adventurers.

S&S has an unusual feature of having a bunch of different endings. You end the game by leaving the island on a ship, and the ending you get is based on how many of the quests you’ve completed. If you leave as soon as you gain access to the world map, the hero realizes he’s not cut out to be an adventurer and heads back to normal life. There are other “gimmick” endings; if you rest for a year in the first town without doing any quests, the hero decides he likes the town so much he’s going to get a job and live there.

Time passes as you stay in inns or travel to different places, and there are events that can only be done at certain seasons or specific days. There is a 10 year time limit but from what I’ve read that’s way more time than you need to do all the events and quests in the game. My idea is to see if I can at least get the “normal” ending without a walkthrough and then I can use a walkthrough to finish any quests I missed for the “true” ending. But if that would require starting from the beginning I’ll just move on to the next game. 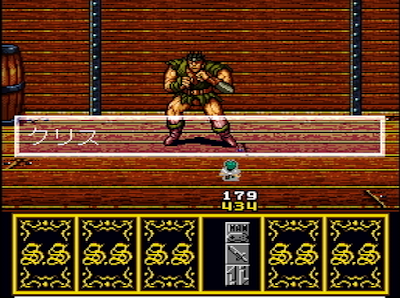 The graphics are pretty underwhelming.

There are 6 stats that each have there own experience level; it doesn’t tell you how much experience you get for a fight, though. In theory, attacking should increase strength and so on, but every stat seems to get experience from any battle. Equipment is based on your stats (so you need a certain strength to use the next powerful weapon, etc.)

There are apparently 34 quests, and they can don’t have any specific order (although some apparently only open after you do other quests). I’m not following a walkthrough so my numbering of the quests is just the order I did them in.

I tried the first question and got my butt kicked badly; I looked at a Japanese guide to see if I was missing something about the system — there is another quest in town that’s much easier to do first, so that’s what I did. 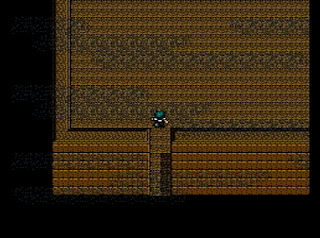 The school is haunted! It turns out a teacher at the school is doing experiments on people to make ghosts. You beat a possessed adventurer and then the teacher himself, and the quest is over. One oddity in this game is that there are no healing spells, but the healing items are quite cheap.

Finishing a quest can get you money and items; in this case I also got a second adventurer in the party, Lenna, who makes the other quest much easier.

The thug son of a rich man in town has taken over the pub with his gang. Finishing this quest just requires beating him (twice). Then his father makes him join your party.

Now the pub is open for business, and I got several leads there for future quests. Two are events that only occur on specific days, so I decided to head out to one of the other towns first. First I went to the collector’s house; he sent me on a fetch errand to make sure I was trustworthy, and then requested an Elixir. From there I set off for the Mirror Castle, finding a new town along the way. I learned about a festival in this town (Sultan) from 11/11-11/20, which is still some time away.

Before doing the Mirror Castle, since it was the beginning of April I decided to go down to Madock, where there’s a beauty contest on 5/10.

Before the beauty contest I found a guy in town who is having a problem with an “endless stairway” in his basement. This quest just involves going down the stairs and fighting random encounters until you meet the boss. The first time I lost because I didn’t have any paralyze healing items — I can tell from this quest and another one that stat restoring items are essential to the game. The second time I had enough of them and won.

Runna, our party member, enters the beauty contest. You have to pick how to make her behave in the contest to get big points — I think it’s just random, but I won (if you can lose, I’m not sure). 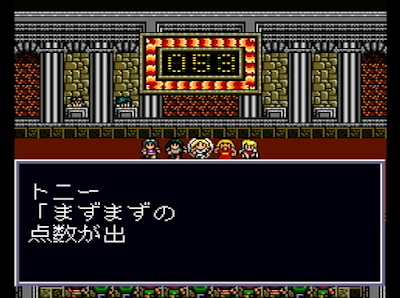 In Madock there were also kids that a guy wanted us to escort to a northern town. While I was going there I passed through a number of other towns and got some leads on additional quests that I can’t do right now. Several of them cost too much money, or require me to do something else first. In one town you can join a cult, which ends the game.

In the north town it turned out the house we were supposed to escort the kids to is the wrong house, and going back to Madock, it turns out the guy there just wanted to get rid of the kids and he’s gone. The kids join the party…that might seem bad but they have a lot of MP and don’t do that poorly in battle. 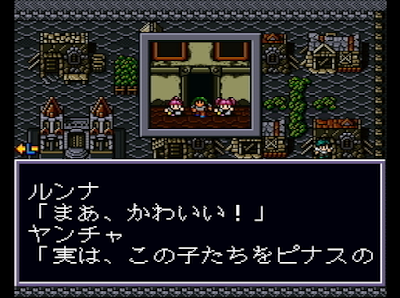 After this I wandered again; eventually I came to a western-themed town where I have to pick a side between Clint and Giuliano (named after famous Spaghetti Western actors). I chose Clint. You then have to save him from Giuliano and fight G. one-on-one. The first time I lost because I picked Balmore to fight him. He uses an attack that causes broken bones (disabling the fight command), and he does it every round so you pretty much can’t beat him without magic. So I lost that time. 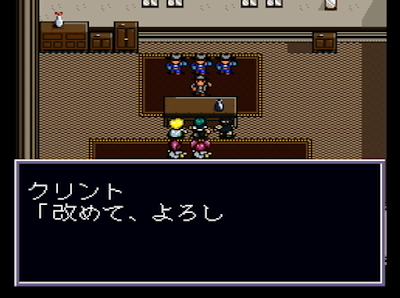 Second time I used Runna and it was easy; I got kicked out of town afterwards but at least with 10K. I was also able to pick up an Elixir, which the collector guy wants.

The next town over was supposedly guarded by a big monster. He tricks you into a contract where you have to talk to 16 people to find out the single one telling the truth. Of course once you solve the puzzle he just attacks. I messed up at first because I didn’t know the yellow numbers coming out from physical attack damage meant he was getting healed — once I switched to magic it was over quickly.

Now I will head back to give the Elixir to the collector, and perhaps I can head back to the volcano now that I have 10,000 to buy the cooling unit. My guys still don’t have high enough stats for the next level up of weapons/armor.

On the way, I decided to pay the 10K for entry to the Mirror Castle. This is just a bunch of tricks and traps with treasure chests to find — when you find them all, you “win”. Some of the equipment can be sold for more than 10K so it may be worth it early in the game, especially since I still can’t equip any of this stuff. 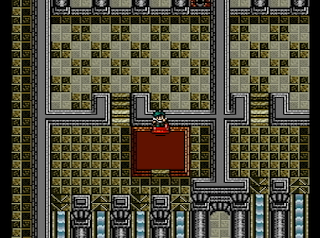 Now on to the fire mountain.

The oddest thing about the game so far is that I’ve completed 8 of the 34 quests and my stats still aren’t good enough to upgrade my equipment. There’s also magic and techs that can be bought — these also require certain stats to use. If you buy it, anyone (with the requisite stats) can use it. I was able to buy the second Fire magic which a few people can use; that’s helped quite a bit. The techs (which cost HP) I haven’t done much with.