Tactics Ogre: Let Us Cling Together (タクティクスオウガ)
Released 10/6/1995, Developed and published by Quest

This is the second game in the Ogre Battle franchise, representing Chapter 7 in a theoretical eight chapter story (although the plot has basically no connection to the original game which was Chapter 5). Like the first game and the franchise name as a whole, the title is taken from a Queen song. The game is very different from its predecessor — while it kept the general character classes and the “Chaos Frame” (reputation) idea, the game is a 3/4 view strategy RPG rather than a real time strategy game. Both the story and gameplay are clearly heavy influences on the later Final Fantasy Tactics.

The plot is a huge advance in storytelling for SRPGs; I can see this clearly from having played pretty much everything that came before. Probably the most developed plots before this were Der Langrisser and Super Robot Taisen 4, but neither game really comes close to the complexity of TO’s storyline and characterization. Apparently the designer Matsuno was inspired by the breakup of Yugoslavia and the resulting ethnic conflicts and atrocities. I’m old enough to remember the NATO bombings during Bill Clinton’s presidency. In the TO story, the land of Valeria was united under King Dorgalua, but he died with no clear heir and the kingdom broke up into the former ethnic groups — the Bakram, Galgastan, and Walstan. The main character (Kurisu, the default name is Denim) is Walstan, and at the beginning of the game the Walstani are the weakest of the groups, having been the subject of ethnic cleansing by the Galgastan theocracy, and having these two powerful states around them. Kurisu, his sister, and his friend Vise are members of a resistance force trying to free the Walstani.

Having the main character be in a resistance army is not a new thing; I’ve played several games before that have this. What sets this story apart is the moral ambiguity of all the sides; drawing from real conflicts, Matsuno avoided the usual trope of making the resistance army the band of heroes of the light vs. the dark, evil empires. I’ll put the more spoilery stuff lower in the post if you want to avoid it.

Incidentally, this is the first game I played in Japanese where I actually tried to look everything up and understand it. I played it in 2002 or 2003, although I think I stopped playing in the middle of chapter 2.

You start with an opening section that’s like Der Langrisser and some other games, where you answer questions to determine the starting stats of your main character. Unfortunately the questions are incomprehensible and give you no indication whatsoever of what kind of character you’re creating or what’s going on. 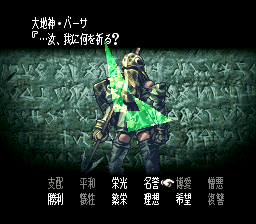 The game begins with a few missions that are basically tutorials, where you have a battle mostly with guests and we free Duke Ronway of Walstani. We then become his “young heroes” who will fight to ave the Walstani people. I’m not going to go into great detail on the plot since you can play this in English. 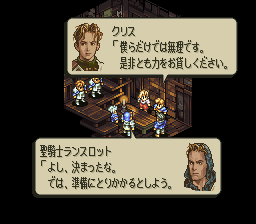 The game is graphically impressive, and apparently the game was delayed as much of a year largely because of how much effort they put into the graphics and especially the sprite animations. Matsuno eschewed the typical anime style of characters and went with a more realistic look. 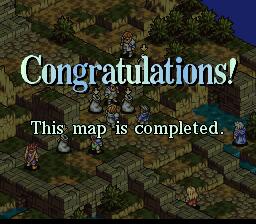 Of course the victory screen is where the title of my blog comes from — as I said the intro, the phrase perfectly captures what to me is the essence of a SRPG, when you struggle and think your way through a stage to finally beat it and get the Congratulations message. 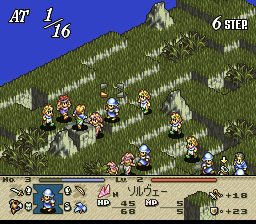 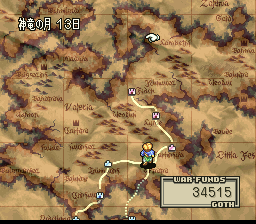 After that first set of battles, we’re on our own. Kachua (Kurisu’s sister) and Vice are NPCs who you can’t control, and then you have a set of soldiers and valkyries. Just like in Ogre Battle, they need to be levelled up before they can switch to other classes.

The battle system is based on WT — rather than a turn-based system, characters act based on their WT, which is lowered by agility and not having too much equipped. Other games before this have had speed-based turn systems, but this may be the first game where characters act entirely based on their WT and there is no concept of a “turn” where everyone acts. Characters who choose not to move or not to act will act more quickly, and it is possible for one character to take more actions than another. I can’t say for certain that this has not been done before because some games were a little ambiguous, but it could be.

The problem with the system is that they didn’t quite get the balance right. Equipping armor lowers your WT. Everyone can equip any armor, but certain classes benefit more from it because the defense increase is related to a P. RES stat that is based on your class. The problem is that the way they implemented the system means that armor is rarely a good choice for anyone, because the speed, hit, and dodge penalties you get are not worth the defense increase from the armor. 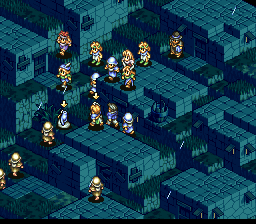 The game also has height and facing — Front Mission had height and I think maybe Lady Phantom had facing, but neither system was common at the time this game came out. The other unusual system is that everyone starts a battle with 0 MP and the magic points recover as the time passes. This means that you cannot run healers out of MP or anything like that. Magics are equipped, and the AoE of the magic increases based on your caster’s MEN stat.

Each character also has an element, which affects their stats based on the type of ground they stand on, and also their compatibility with enemies.

Denim can recruit enemies by Persuading them; this is more useful for getting their equipment than actually recruiting them for your team, although it’s the best way to get monsters on your team. The problem is that characters have a Loyalty stat that’s pretty low for enemy persuades, and they might leave your team if things get too bad. 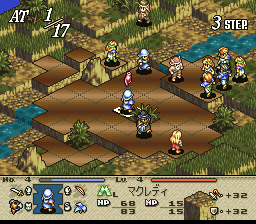 The game has permanent death of units. I have said in my Fire Emblem reviews that I do not like this system. Especially in this game where differences in levels make such a huge difference, it often becomes necessary to train between battles just to keep your levels equal, and sometimes you even have to level up more. The grunts in a mission are all set at the highest level guy you have, but the leaders have fixed levels. There are several battles that pit you against archers that can do enormous damage with 100% chance to hit even from the front, making it hard to survive the battle without doing some outside levelling.

The PSX version allowed in battle saves so I have been using some save states, but even so you can’t just keep reloading until they miss (that would be tedious anyway). 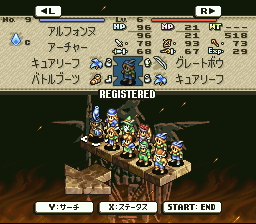 This is my party near the end of chapter 1. The Chapter 1 ending has a big choice — Duke Rowen’s plan is to massacre a town of Walstan to try to raise support for fighting against enemies. Denim gets to choose whether to participate in the massacre or go against Rowen. Regardless of which you pick, Denim does not actually do the massacre himself, Vice becomes your enemy, and Denim gets a bad reputation. I went for the massacre route because the “don’t do it” seems like the obvious choice that a lot of people will take. This puts me on the Law route. 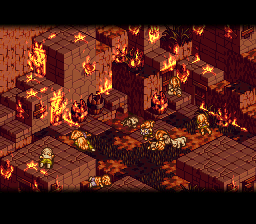 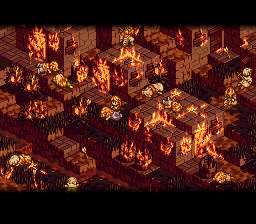 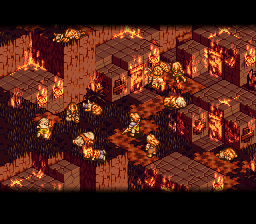 Those are some pretty intense scenes for something that your main character approves of!

I’m currently near the end of chapter 2. My party is basically the same as above. Kurisu is a barbarian, but bows are still much better than anything else. The Archers are the overpowered class of this game (I’m using two). I just lost a fight and will need to equalize everyone’s levels and try again. But I don’t want to get in a cycle of “rush the leader and win the battle, train to equalize levels, repeat” because that’s just not a satisfying way to play a SRPG. But leaving the leaders alive often mean opening yourself up to a unit dying with little notice.