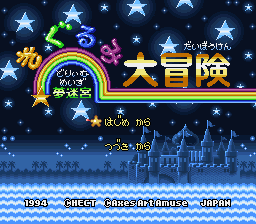 This is a rather bizarre game that got a fan translation. It begins with a boy having a dream. 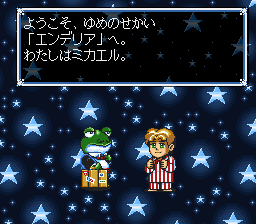 The frog says he was chosen randomly to be a hero, to save four princesses who will then use their power to help him defeat the Akumu (“bad dream”). Unfortunately that’s the extent of the story — there aren’t any developments, twists, or anything.
The game is a first-person maze. 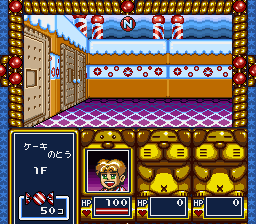 The game takes place through 5 areas with a total of over 60 floors, so there’s quite a bit of volume. On each floor you can buy a map that will show you the floor’s layout, although there’s no way to know where anything is on the map (stairs, shops, etc.) The areas are suitably kid-dream themed (Cake Tower, Pudding Tower, etc.)
The “kigurumi” (wearable animal costumes) from the title comes from the way the characters can wear the outfits of defeated monsters. 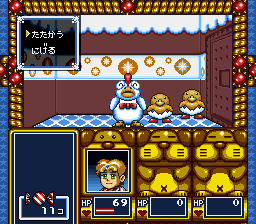 Any large monster you fight (like the chicken in the middle) will leave behind a suit as long as they are the last enemy defeated. You can then visit a “changing room” to change suits, and there are also tailors that can make custom suits by combining multiple suits — this doesn’t seem necessary, though. 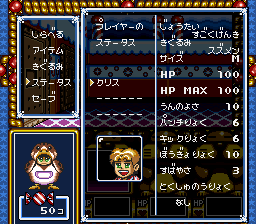 Unfortunately that’s the only way to change the characters’ power. There are no experience levels or equippable items. You gain “candy” from fights that act as money, but what you buy with those are healing items or single-use damage dealing items. The problem with this system is that it feels pointless to actually explore the various levels of the dungeons. All you get is money that you can use to buy healing items, which let you continue to explore to get money to buy healing items. Once you’ve gotten good kigurumi suits from the current dungeon, all you need to do is get to the boss. So exploring the huge dungeons seems like more of a chore than a fun experience. There are a few helpful items in the levels, particularly the ones that raise your max HP (which is the only way to do that). But I still feel like having to explore 10 floors of a dungeon to find a couple of useful items feels wrong.

The levels are mostly empty; there might be a treasure chest (which you have to walk directly over to find) but often there’s not even that. But what you will find are the wizardry-inspired warps, spinning floors, and trap doors. But they seem to have gone out of their way to make it annoying — there are levels with complicated warp sequences that lead nowhere useful, you can just ignore them and go to the next floor. 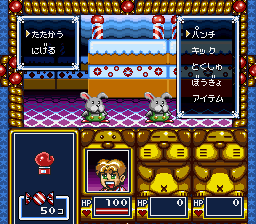 The battle system has you choose “punch” or “kick”, and then an area of the screen. Each suit has a different punch and kick rating, and monsters typically have one type of attack they’re weak to. Some suits also give you special abilities like Fire. 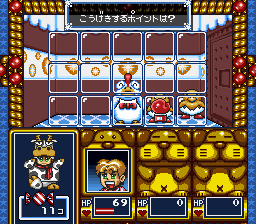 Once you choose an area, the monsters might move out of that area and dodge.

There are other characters to find in the dungeon but they’re quite difficult to find if you don’t know where they are. Once you get them, you can do a combined attack that does more damage. 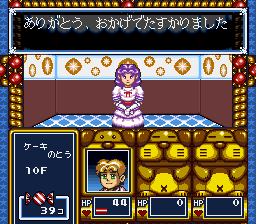 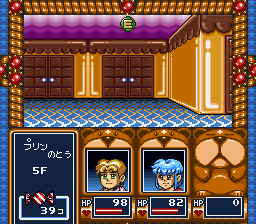 The main problem with this game is that it’s just not that fun to play. Wandering around in the mazes feels like a waste of time because you’re not finding anything useful or getting stronger. But if you use maps, you can probably beat the game in a few hours. The bosses in each tower are at the same level as the grunt monsters until the final boss in the last tower, who is a huge step up in difficulty. As I said before, there are no plot developments.

I think the idea of the kigurumi is interesting, and I feel like this could have been a much better game. They just needed to add some other reason to explore the maps and fight the monsters, and make at least a tiny effort to develop a storyline. I wish they had combined the kigurumi system with some kind of more traditional RPG system. As it is, I do not recommend this game at all.