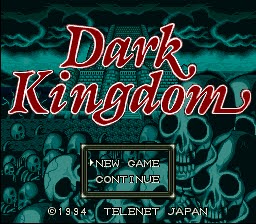 I’ve played a few Telenet games on this blog for the PC Engine, although some of them were ports. They did the Tenshi no Uta series, Deathbringer ports, Xak ports, Lady Phantom (on my SRPG blog), and the Cosmic Fantasy series. This is the first game I’ve encountered on the Super Famicom by them. It has an interesting premise — you are part of the Demon Lord’s army which is taking over the entire continent from the humans. 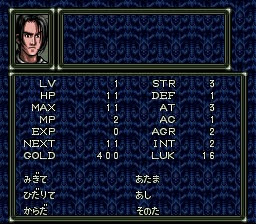 The dark army is divided into 12 different species of 4 ranks. The main character, Jenn, is a shinninzoku, which are in the second rank. They look like humans, which is why they aren’t in the top rank. He enters the dark army in the hopes of finding out who wiped out his village. The opening has him taking a test by walking through a gate, which determines his position in the army. He gets the best position, an officer, and enters at the lowest rank of officers.

The majority of the game involves taking missions from the commanders in the Demon Castle, leaving to go out and do them, and then receiving a promotion. You can hire mercenaries to accompany you (up to 9). They can equip things and level up, but they cannot upgrade their skills or magic. Eventually you get enough “real” people that you can stop using the mercenaries. In theory they are still useful because if your main party gets wiped out, the next 4 characters can come in and continue the battle. But I never actually made use of this.

Before you leave on a mission, you can buy things, visit the passport office to allow you to pass between regions, and equip magic. Each person has a number of MP, and can equip up to three spells, each of which cost a certain MP to equip. The spells themselves have a limited number of uses; I’m not sure if it’s based on your MP or level. 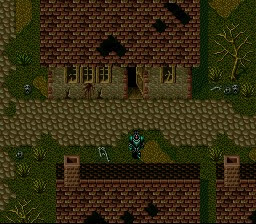 You can also fight in the arena below the castle to level up. You have a time limit to finish each mission, but the time limit is so generous I never even came close to hitting it. The time advances when you are on the overworld map, if you stay at an inn, or if you fight in the arena. You can choose in the arena among 4 monsters (any combination of them), and then fight 1 to 99 battles against those monsters. So you can level up quite a bit from this. I had to do this a few times during the game because I found it a lot harder to level in the actual dungeons. 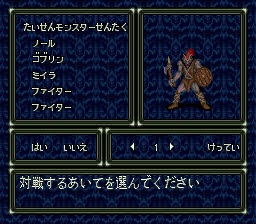 The battle system gives you four options. The first one, SWM (Sword Meter), is a basic attack that brings up a swing image: 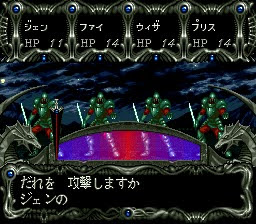 The sword moves back and forth and you’re trying to stop it in the middle. The color also changes but I could never tell if that did anything.

Next you can use AP, which are special abilities. Without an instruction booklet I couldn’t tell what most of these did, and there are combinations you can do. The most effective one seems to be Successive, which gives you multiple strikes in one turn. Every time you finish a mission you can give all your non-mercenary characters one level of an AP skill; I focused on what skills each character started with, but Successive definitely turned out to be the winning skill. There’s also magic and item (no defend).

When you venture out beyond the castle, you can visit towns where the humans are all scared of you. You can take anything you want from the weapon or item stores and stay in the inns for free (the items are pretty worthless, though). 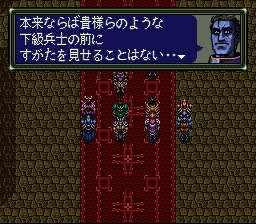 The first few missions are lowly tasks and Jenn gets the feeling he’s being used and looked down on by the superiors, especially those who consider his 2nd rank species to be too humanlike. He gathers a few allies to his side as he continues to raise himself in rank. One of the commanders, Beizar, takes a particular dislike to Jenn. 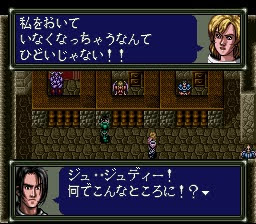 One big problem I had with this game is that I got a huge amount of freezes — this game probably froze on me more than all the previous 48 other games combined. There were also a lot of problems with the BGM. I would be tempted to chalk this up to emulation problems or a bad dump, but bsnes is usually pretty reliable and the ROM is from NoIntro. I had to use a lot of save states to deal with this problem.

From here there will be more story spoilers, but my overall feeling about the game will be at the end of the post if you want to jump to there.

By the 7th mission Jenn’s fiance Judy has joined up, and we go after a new enemy, the Hero Lux. This is a personal request from the Emperor. This becomes kind of a parody because they’re like the heroes in a normal RPG, and there’s a rumor that they are immortal — for just half their gold they can come back to life endlessly. How will we defeat them? Well, once they kick our butt, Jenn changes into a superman and crushes them all, although they do make you fight the battle out. He does this several times during the game but never remembers. 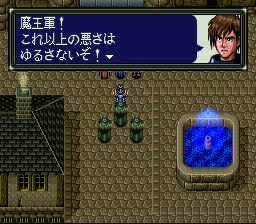 Next you’re charged again by the Emperor to recover a sword in a cave, but the cave also has something the heroes are looking for. Thanks to a series of traps, Jenn has to team up with Lux to escape the cave. Afterwards, another Emperor mission to beat a new dude that has appeared, Tordes. Tordes knows Jenn although Jenn has apparently forgotten him, and Tordes kicks Jenn’s ass. Fortunately the superhuman transformation comes up again so that Jenn can win the fight and cause Tordes to flee.

Eventually, Jenn learns that it was Belzar that destroyed his village, and he decides to assassinate him. But at the same time, Belzar has taken out the Devil Emperor, with the help of Tordes. This means Jenn has to flee the capital and for a while it’s just you and Judy. He teams up with the heroes to defeat Belzar. Along the way, he learns that it was not Belzar who destroyed the town, but when Tordes came to kill him, Jenn’s superpower destroyed the whole village.

Tordes is the final boss, who tells us the truth about Jenn — he was a prototype Super Being sent by the gods to test out a being that would be greater than either the old type humans or the new type monsters. Tordes was sent to kill Jenn. Once you beat Tordes, he dies, but Jenn is unable to control his power and disappears, although Lux is able to escape. He’s hailed as the hero for destroying the Demon Castle.

Later, Jenn stumbles into a village, ranting about having to escape from the blinding light and warning the villagers to run. They recognize him as one of the demons and put him in a jail cell. The game ends, saying that nobody knows what happened to him. Apparently if you do a side quest in the last chapter someone releases him and it says that maybe someone will be able to save him.

Famitsu gave it a 22/40 when it came out and that seems about right.Everything about the game is pretty middle of the road. The storyline is fine for 1994 if you ignore Final Fantasy VI (which would have been hard to do at the time!) The gameplay is a touch above the old cookie cutter DQ2 system, but some of the added things are somewhat annoying (like the swing meter). It is interesting to be in the reverse position of a normal game, aiding the dark side against the humans. The interface is mostly OK, although you still can’t see the stats of a weapon before buying it! How hard is that?

Next up is Popful Mail, the SFC version.