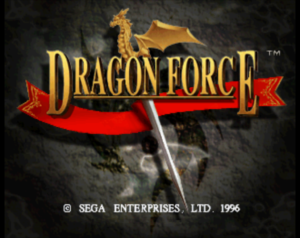 This is a different kind of SRPG, that trends towards a type of “world takeover” simulation game like the Romance of the Three Kingdoms series. It’s questionable whether it actually qualifies as SRPG under my rules. It is not based around any fixed maps or “stages”, and there’s not much of a developing story. On the other hand, it does have a clear goal and path to victory that isn’t just “do as well as you can”, nor is there any arbitrary time limit or anything like that. I will at least play it until the end of this week and then see what I think.

I had a really hard time figuring out how to get started in the game. The Japanese instruction booklet explains the facts of how everything works but doesn’t give you much direction on what you should actually do in the game. You begin by choosing the leaders of one of the eight kingdoms. The basic goal of the game is to take over the world (either by conquering the other nations or convincing their leaders to join you) and then I think there’s a final boss you have to defeat after that. 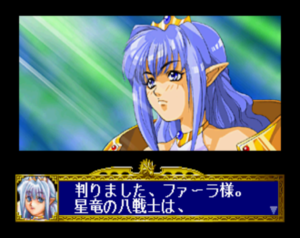 I initially went with Tieris because I had read she had the easiest campaign — but she has an extremely difficult first fight. No matter what I did I could not beat the first fight, and I was wondering if I needed to give up and move on to something else. 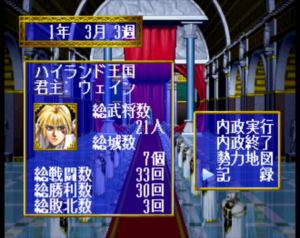 Anyway, with Wein I was able to actually get started and figure out how things work. Each month is basically a “turn”, with a hourglass counting down in real time. You begin each month with “castle actions”. You can search for items or try to improve your castle, equip things, assign “merits” to people (which you get from winning battles) and try to convince prisoners of war to join you, and save your game. The items you get can be equipped, or some of them raise stats or let a general use a new type of soldier.

Once that’s done, the month begins. Everything is in real-time. You’ll see people walking around all over the map. In a castle you can recruit soldiers. It takes some real time for them to build up and then you get to hire them as any type that your generals support. 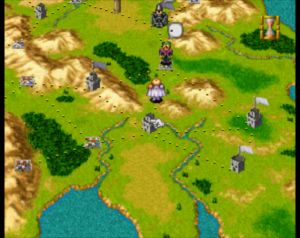 First up for Wein is to take the castle near the start. Fortunately these guys are weak. The battles are also in real time. You begin by seeing which general you will fight of the opposing team and what kind of troops they have. Then you pick who you want to fight them. Units have compatibility ratings with other units so you want to pick Horsemen against Soldiers, and so on. 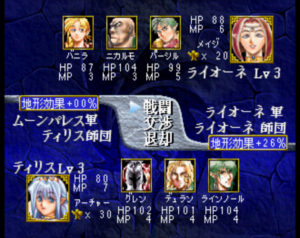 The battle begins. You see what formation the enemy is choosing and then you choose your own formation. Within the formation you then have some various orders you can give — split up, gather at the center, front ranks go forward, all-out attack, etc. You can change the formation during the battle although if you pick all-out you can’t do any changes after that.

The battle lasts for 90 seconds or until one side retreats or is wiped out. Each general has a power meter that fills, and when it fills up they can use their special attack (if they have enough MP). 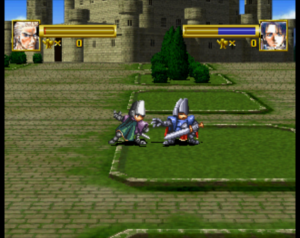 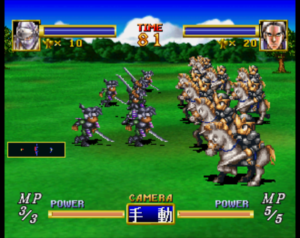 If all the soldiers on both sides are eliminated, the generals can do a fight with each other. Either one can retreat, but if they choose to fight it goes to the death.

If one side retreated, they will flee the area and lose a lot of their soldiers (if they had any left).

So this is basically how the whole game goes — you just alternate between the castle scene, and then one month of gameplay. The opposing kingdoms move their own units around and fight each other. They can’t eliminate each other entirely, and they seem to have places they don’t cross. Also neutral bandits or similar units can appear out of nowhere and come towards your places, so you can’t just leave castles undefended. 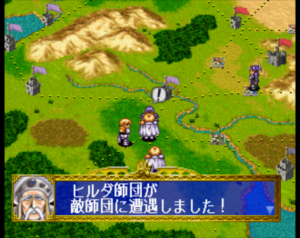 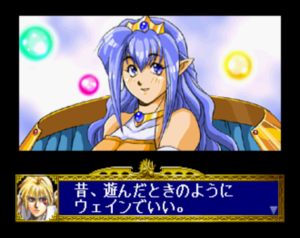 After conquering the green kingdom, I went north and met up with Teiris. She is a childhood friend of Wein so just agrees to join without fighting. Now I had two of the kingdoms.

This is where I decided to stop. It was getting a bit tedious for me in the same way that the Romance of the Three Kingdoms style games do — I was spending a lot of time fighting these grunt battles against neutrals and enemy forces, and I had 40 generals and 10 or so castles that were getting more time consuming to keep track of.

In the end, I think this does not qualify as SRPG by my definition because it doesn’t have distinct maps, it’s just “take over the world”. This is not a bad game by any means, but it’s not to my taste, I don’t think.

Next we return to the Super Famicom for Fire Emblem 4.