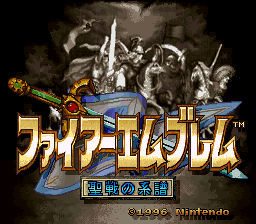 And we’re back to the major franchise of SRPGs, the one that started the whole genre and is still going strong today. The game is different in many ways from FE3, although some of the new concepts in introduced were used in later games.

The biggest change is that there are only 12 maps, but the maps are very large. Each map contains a series of smaller stages within it. By conquering one castle it typically opens up the way to the next one or causes new enemies to appear (from what I have seen so far, there are never any real choices about what to do next).

Probably because of this, they didn’t feel that they could only allow players to save between maps. I would have expected them to allow a save after conquering a castle; instead they allow you to save at the beginning of each turn. This of course makes the game considerably easier than the previous ones. You don’t have to play as carefully because the risk of a bad move is much lower. They provide 4 save slots so you don’t need to worry about saving yourself in an unwinnable situation. I had a system where I kept the first save slot for the beginning of a chapter, and the second save slot for a safe turn after conquering a castle, just in case I screwed something up and needed to go back.

Here is a list of many of the other changes from FE3:

Another big system in this game is the Love system. Halfway through the game the story switches to the descendants of the initial group (thus the game’s title). The children you get will depend on who you paired up in the first part of the game.

First off, let me say that I’m using my own romanizations for the names — it’s too much effort for me to check the romanizations of all the names against either the NA official ones or any fan translations. 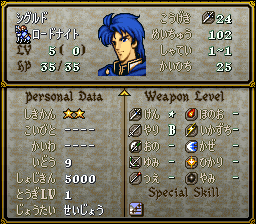 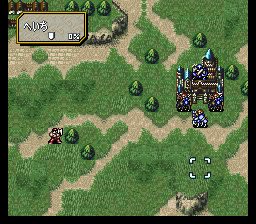 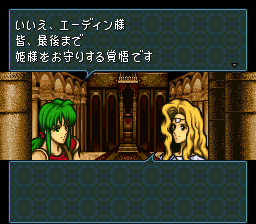 As an introduction chapter, this is a small sized map (although still larger than previous FEs).

This is basically two parts. The first part is a race to save the towns, although you have plenty of turns since it takes 10 turns for a barbarian to destroy a town in this game. I kept the armor knight in the castle to defend it and sent everyone else out, making heavy use of the “attack and retreat” ability of the mounted knights. This also helps a lot with the bosses since you can rush the castle and then retreat, letting someone else go in.

The second part is a horde of barbarians that all come at you; it can be a bit hairy but in the end I got a few lucky dodges and succeeded. I made sure to to get the silver sword for Sigurd from the NPC unit that comes in. 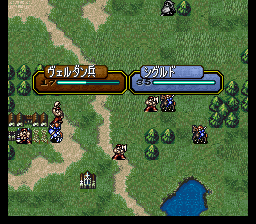 The first full sized map. We start at the castle at the top right and there are three castles to capture — each castle is almost like a full stage of another FE.

I started out sending everyone down. The initial town is not hard to save. The difficulty at the bottom near the castle is Aira. You have to conquer the castle before she will join (at Sigurd’s request), but before that she’s a nasty fighter that can easily take down party members. I lost several times due to this and it took some effort to maneuver everyone around to not die. Meanwhile, I moved Dew and Aeden towards the party and sent one or two units over to help out with all the guys attacking them. 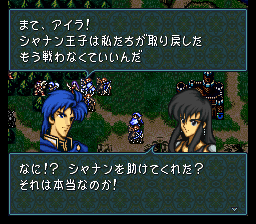 The second castle is not hard to take, but there is a town all the way to the left that is tough to save. I managed to do it on the last possible turn but you don’t get an item, just money (500 gold since everything else was destroyed).

At this point I was worried because I had not left a defender in the initial castle, but the troops that come out at the top are dealt with by NPCs so it’s OK. This part you have to move very slowly through a forest — I never like these parts in SRPGs because you spend so much time just moving each person individually and then ending the turn. Sigurd picks up Dierdre in the forest and Alec gets a hero axe from a helpful fairy. 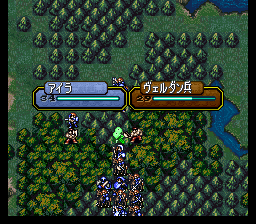 The boss would be difficult except that Dierdre comes with a silence staff that completely neutralizes him. I made sure to have Azel kill him so that he could get the magic ring. 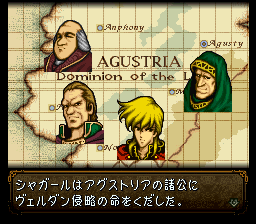 Each chapter begins with fixing everyone’s weapons, and then seeing how far they get in the arena. I just have everyone fight until they die and then reload. 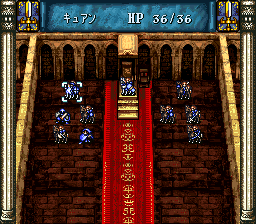 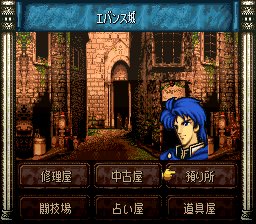 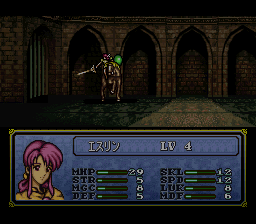 I didn’t leave anyone back in the castle because now that I have a warp/return staff it’s easy to send someone back. The first big problem in this stage is the barbarians heading for the towns. They’re in an inaccessible place on the map — eventually some new units will come out to help, but you have to go incredibly quickly to save the first village. The prize is a discount ring; I saved all the villages except that one. 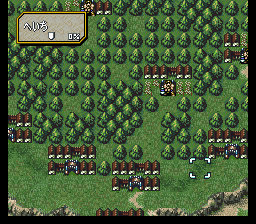 Once the left castle was taken care of I headed north and met up with the two new units. The top castle wasn’t much of a problem. At this point the castle on the upper right activates and some pegasus knights begin to head for the base. I warped Midayle back there so he could shoot them, and also Levin (to recruit Fury). It takes them a while to get there but once they do it’s no problem. I eventually realized I had forgotten to actually visit the villages I saved, so I sent Fury to do that. 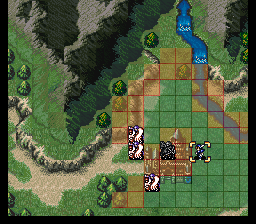 Meanwhile the next castle has a bunch of shooter units and horsemen that can come in and wreck the troops. I had trouble with Sigurd killing them too efficiently which caused him to get attacked so many times he died. I also had to be careful with some of the weaker characters like Diadre because the shooters could gang up on them. They can’t actually be attacked without Fery (except for one who is in range for a bow/magic shot). 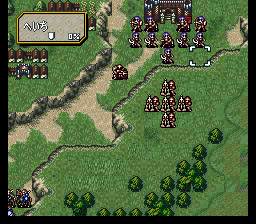 Once the intermediate castle is conquered the shooters disappear, and it’s time for the final castle. A troop of horsemen led by Zane. I took out his entire troop and he began to run away. I’m glad I jokingly posted a screenshot to discord calling him a coward, because they informed me he was heading back to the castle to get reinforcements — indeed, if you let him get back to the castle he will appear the next turn with a full new set of units. 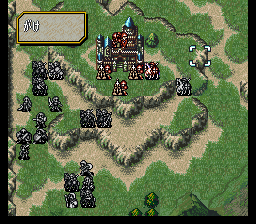 I could not stop him from reaching the castle, but I was able to get there quickly enough to sit on the castle entrance so he couldn’t come out, kill the rest of the guys, and finish the stage.

My love pairings were starting to come together here. Basically each character gain some love points when they start next to each other. There are also some events that raise love points, and some people start with stronger love towards certain others. When both people’s love points reach a certain point, they are lovers and their child will appear in the next part of the game.

This stage has a lot of wandering around. First we go up the center lane to take over the castle there; meanwhile I sent some horsemen fanning out to stop the pirates from ravaging the towns. 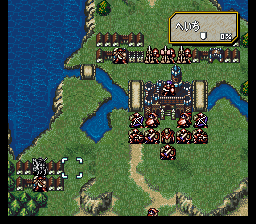 After the initial enemies, the Cross Knights and Eltshan show up. They are quite difficult; their sheer numbers means they can usually kill someone, and Eltshan gives them a large leadership bonus. Lachesis can remove Eltshan from the battlefield but she has to reach him first. This part took the most resets of any part so far. Sigurd’s leadership bonus helps, as does Lachesis’ cheer. 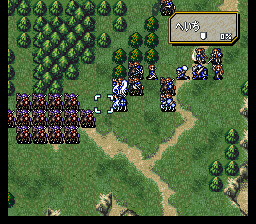 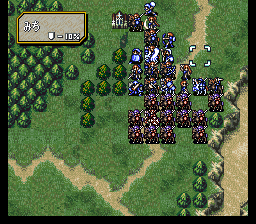 Then we continue to take over west castle, which is nothing compared to the Cross Knights. Once this is done, new enemies appear from the north, and there are several allies that appear way up at the top of the screen. They can get overwhelmed easily, and I think you need to use the chokepoint on the isthmus like this: 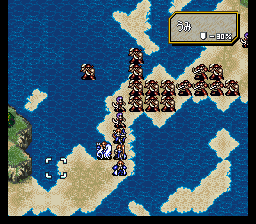 Here, Bridgid and Tilty can attack, Claude can use his area heal, and Fury can dart in and out and contribute. With this setup I was able to take out almost everyone (I sent in Cuan and Ethlyn to help but I think the initial 4 could have beaten everyone without help). The rest of the map is easy; one of the axe guys did go back for reinforcements but that was just extra XP. I got some initial promotions after this stage (just Ethlyn and Aira).

So that’s 4 chapters out of 12 — I’m pretty sure this will be the longest game I’ve played so far.