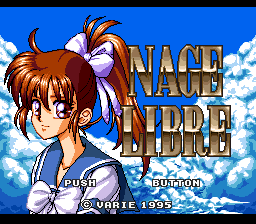 This is a game I missed on my first pass through 1995. It’s a 美少女ゲー, a game where every character is a high school girl in various school dress. There was a 1997 sequel for Playstation as well. The game was way too expensive to buy, so I don’t have in instruction manual. My discussion of the system is entirely based on playing the game plus information from one walkthrough site I found; there may be parts of the system I didn’t get.


The game is 23 stages back to back, with no other content other than short story sequences. The story as a whole is fairly thin — five high school girls get brought into the world of Nage. They spend the first half of the game trying to escape, but then find that Nage is imposing itself on the real world. They go back into Nage to defeat Misty, the person that initially summoned Nage, and then defeat Nage itself. Most of the dialogue is just banter between the girls. 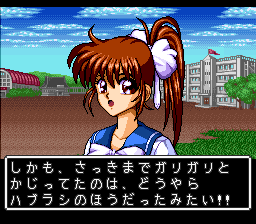 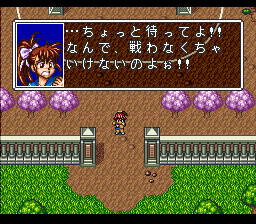 The first thing you do is input birthdays for the 5 girls. 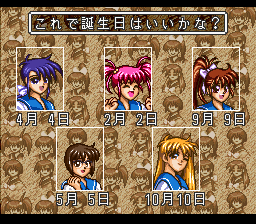 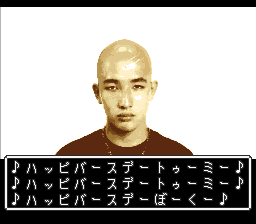 Everyone can move 6 spaces on the map regardless of the terrain. What the terrain does it affect the speed that your turn gauge fills, and some of the map squares are damage or healing. 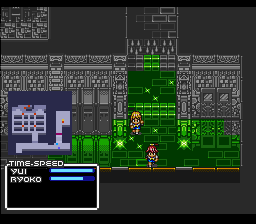 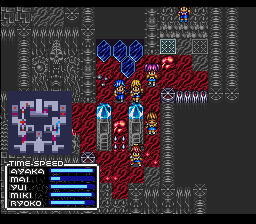 The battle system is interesting. It’s based on a card system, but not deck-building as such. Each encounter is 6 rounds (or until one person dies). At the beginning of each battle there is a random hand of 5 cards. When you use one of the cards, it will get replaced by another random one. Everyone shares the same hand so you do sometimes have to use less-than-optimal cards to clear them out of your hand. Each card has two numbers; a power at the top left and a speed at the bottom right. Who actually goes first is affected also by the character’s speed stat in addition to the speed of the card. There is also a gemstone on each card, and if it matches the character’s birthday gemstone, it automatically has max power (15). 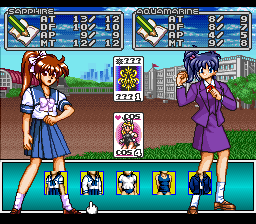 The types of cards are: 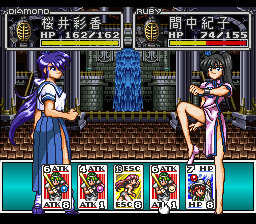 Every character also has a club, although some people are “regular students” or bosses. The main thing I am not sure about is whether the clubs affect your stats; there’s no information about this in the game or on the site. There is a compatibility like in other games (for instance, the Tennis club is very strong against the Karate club but weak against Japanese Dance). This is potentially interesting but in the end not very useful. You only ever have 5 people and can only switch clubs between stages. Most stages have a large assortment of enemies and so it’s difficult to pick an optimum set of clubs. 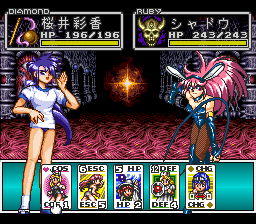 It’s not really necessary though — the game is quite easy for the most part. There are a few tricky stages and bosses, but if you lose a girl they just come back in the next stage. 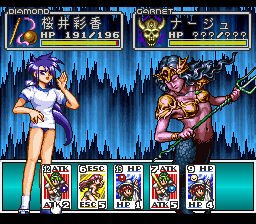 One other thing I’m not sure about is the level advancement. There’s no XP; the girls gain levels at the end of the stage, but I can’t tell whether it has anything to do with what they did during the stage.

There are a lot of interface issues. It’s very hard to see the stats of your girls during the stage, and there’s too much opacity in the system (although some of that might be cleared up by the instruction manual).

In the end this is not a bad game, but it’s not particularly good either. I’ll be interested to see what the PSX game changes in the system. I read one complaint that there aren’t as many clubs, but that doesn’t seem like a bad thing to me. I did notice that they made some changes that reduce the randomness of the card draw a bit, which is probably good — it can be frustrating at times when you’re drawing nothing but costume change and escape cards. 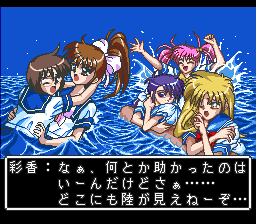 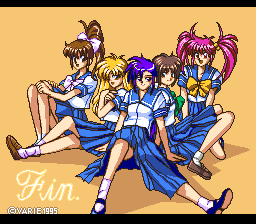 After you win the game you can play an Extra Stage with all the bosses on one map.

Next up we’ll be back to 1996 for Vagrant Story, a game I have heard about but never played.