Finally I put this game out of its misery. This game has a problem that was also in Villgust, to a lesser extent, and seems to be a recurring issue with crappy RPGs of this era. They don’t give you enough resources to heal, and the dungeons are so long and the random encounters so frequent that there’s really no way you can just play through the dungeons, fighting the enemies as you go. This is especially true when the grunts spam moves that hit all of your guys. There’s no effective party heal item or move in the whole game. So in these cases you basically have the choice of overlevelling until the grunts pose no threat at all, or run from most or all battles (or use a cheat code to turn off encounters).

I will admit here that I did use cheat codes a couple of times for this game. I turned off encounters for the final dungeon, and I briefly turned on a “max xp after battle” cheat to speed up grinding in two places.

All of the dungeons in the game are exactly the same — large, ugly, featureless corridors and rooms with mostly worthless treasure chests and nothing else of interest. So I’m not going to describe each one.

Last time I left off getting the ship. You go to a village where Shachi and Leia are; they’re just cameos in this game and don’t play any story purpose. Shachi is a follower of Kaioh here, which is completely opposite from the anime. After that we head to a castle where Kenshiro supposedly is, but it’s actually Hyo (I thought it would be Jagi posing as him, but whatever). You fight Hyo but afterwards he lets you know that Kenshiro is still alive. Makoutei has sealed him away, though, and we need 7 experienced fist users to get him free. So the next part of the game is hunting down these people.

First up is Shin. We go through another dungeon to fight Mr. Heart:

Heart has Julia’s ring, and with that we can recruit drunken Shin to the group. Next up is Souther. To convince him to join you have to find his master’s testament and show it to him, and he has the revelation sort of like in the anime, but doesn’t immediately die.

Now we have our seven people — Kurisu, Rei, Shin, Souther, Toki, Hyo, and Shu. By shooting out Atari 2600 beams we can revive Kenshiro:

Souther dies, but Kenshiro is restored — unfortunately his heart has stopped, so Toki has to give up his life to revive him. That’s two more heroes down. Next goal is to beat the “master hunter” Zariga, who killed Ryuken at the beginning of the game. I’ll skip over that part and move on — next up is really the final goal. Makoutei’s castle is protected by a barrier, and we need 13 warriors to open it. The rest of the game is basically tracking down all the warriors we don’t yet have on our side.

Fortunately in defeating Zariga, we get a very useful ally on our side, at the cost of Mizumaru’s life. Mabie has no fist techniques, instead she just has a free heal, which is pretty good. As long as she’s around we can actually fight most random encounters without too much trouble.
We also learn that Yuria is actually the one who freed Makoutei because she felt sorry for him! Nice job, Yuria. No time to scold her corpse, though, because Lin and Rui have been kidnapped by Makoutei.

To avoid this post becoming too long and tedious, I’m going to just quickly list the people we have to get to make 13 fighters:

Now we have all of the people. While we’re doing all of this, we have a crystal with seven stars, going out one by one. Each time one goes out, it means Makoutei is closer to perfecting the ultimate fist technique.

In addition to these 13 guys, there’s also a fetch quest where you have to get various Hokuto and Nanto items to release a seal and get the ultimate equipment for the hero. You’re able to swap out guys freely at a secret hideout. Anyway, the 13 warriors above aren’t enough, so Kaioh has to join in as well:

Now we can finally go after Makoutei. After another long dungeon, it’s time to fight him. He blows you down a pit, leaving the hero alone. Fortunately the hero encounters Kaioh, and the hero and Kaioh fight to the top of the castle and face Makoutei. Kaioh dies in the effort, and we find out it was just a projection and not the real Makoutei (sorry, Kaioh).
Moving on, in the Hokuto Shrine we find Yuria, who is not dead, but sick.

Yuria dies, and Atatata (MC’s son) has to fight each of 13 friends just for a few turns each, and then he learns the final secret technique…which is pretty underwhelming, all it does is let you call the friends into battle.

And now the final dungeon. It’s another long, featureless dungeon, indistinguishable from every other one up to this point. Finally, you reach Makoutei, the final boss.

He doesn’t really have anything unique or special, just moves that damage people. By using the debuffs to lower his defense to nothing he’s not too bad, although I may have been slightly overlevelled.

Afterwards, Kenshiro tells Makoutei he was defeated because he lost the love he originally had, when he separated from Tentei. In his dying moments Makoutei regains his love and uses it to revive Yuria.

Atatata then heads to his father’s grave, where it seems like he dies (although it’s a big ambiguous). And thus closes the curtain on this ridiculous story. Here are some of the chief offenders so we can hurl derision their way: 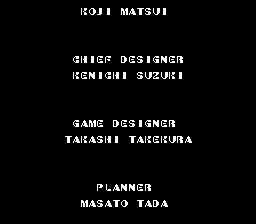 That’s Hokuto no Ken 5. I’ll post a review probably on Monday, but in short, there are a few nuggets of something promising hiding in the game, but overall it’s a mess. It’s seriously flawed in every aspect of the game, and not worth playing unless you’re a diehard Fist of the North Star fan who wants to experience everything in the franchise no matter how bad. I can’t imagine suffering through this game on a real console.