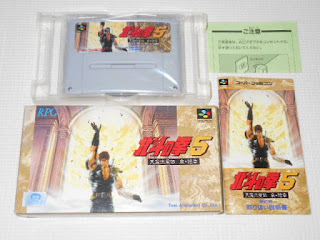 I would say the title of this game sounds better in Japanese, but I’m not really sure it does.It’s just as pompous and overblown regardless of language.
This is, of course, part of the long-running Fist of the North Star (Hokuto no Ken) franchise. It’s one in a series of 7 games for the Famicom and Super Famicom which were numbered consecutively despite having no connection to each other. Some are action games, some fighters, some RPGs. And all seven of them are known as kusoge (crappy games).
Fist of the North Star might not seem like a franchise that can easily be made into an RPG. If you aren’t familiar with the franchise, the lead characters are practitioners of a certain type of martial arts based on “pressure points” and ki. They don’t use weapons or wear armor. They are essentially superhumans who can kill normal people without breaking a sweat, and can only be opposed by another person as powerful as them. The designers might have taken this as a cue to try something new, the way that the Dragon Ball Z RPGs did. Instead, they just went the lazy route and made a standard, cookie-cutter RPG with Fist of the North star as a skin over it. So you have the spectacle of a 4-man team including Toki and Rei, equipped with nunchuks and knives, trading blows with random grunts.

So I’m going to have very little to say about the gameplay for this game — it does nothing different from Villgust or Maka Maka. You attack, you use the fist techniques, which do the same thing as spells or techs in any other game. They do damage, they cause status effects, they heal.

The game has the lowest item limit I’ve seen yet — 7 items per character, including the 4 pieces of equipment. That’s right. Each character can hold 3 items, including plot necessary items. So basically you’re not going to be relying on items for much.

So let’s get started. The opening begins with your character (an original character) having his fiancee stolen by the Matei (Demon Emperor, I guess), who has returned after a 2000 year sleep, after being defeated by Tentei (the Heavenly Emperor). That sounds more like a regular RPG plot than Fist of the North Star, but we’ll go with it. Now the second scene shows various HnK characters fighting against Matei’s units, and then this infamous scene:

Kenshiro, the hero of Fist of the North Star, gets crushed by a boulder and killed in the opening scene.

Yuria, in sorrow, throws herself off a building.

So we’re dealing with a completely separate story. This isn’t the story of Hokuto no Ken, nor is it a side story that takes place during the series (or after or before). It’s a parallel story that has all the HnK characters, but in different roles and with no relation to the original story. This is what seems to have bothered a lot of Japanese players.
So after equipping, Kurisu sets forth to find his lost love. The man who stole her seems to be named Geshura.
If you’re been reading the blog for a while this battle screenshot may look somewhat familiar — indeed, the scenario director and BGM composer are the same as Maka Maka, and the same development studio was involved in both games. Fortunately this game doesn’t have all the awful bugs.

The first destination is the Cave of Ryuken — Ryuken is the Hokuto Shinken master who tutored Kenshiro. He’s still alive, but he immediately gets killed by a guy named Zariga, who runs away. You then get your first ally, Mizumaru. I believe this is an original character.

The first dungeon occurs after this. As far as I’ve seen so far, they all look like this:

You soon are joined by Inazuma, a leader of a resistance group against the Matei. He looks familiar. As you head towards Gelba Castle to find information on Geshura, another guy joins you named Kuroyasha. I never saw the second part of HnK but I gather this is an off-screen character from there…he doesn’t stick around long anyway.

Once you beat Gelba Castle, you save Mamiya and Inazuma is revealed to be Rei, another powerful character from the series. Unfortunately the graphics are poor; as you can see from above none of the characters look like anything (and they walk funny). The in battle graphics are equally drab:

To get to the next continent and continue to chase Geshura, we need to get across a river…thus the “human bridge”. Followers of Rihaku (another character from the anime) get in the water so you can walk across their heads.

It’s hard not to see this whole thing as an intentional parody or comedic take on Hokuto no Ken, but I’m not sure it was intended that way.

In the next town you meet a guy named Grant, who is able to wipe the floor with your group. But then Raoh destroys him, letting you pass. Toki soon joins your party, for no real reason.

After some fetch quests you can finally visit Geshura Town, and go into Geshura’s mansion, make your way up the drab dungeon floors and tedious random encounters, and beat Geshura. Unfortunately he only has a fake doll of your fiancee (like Shin did in the manga series), so we have to move on. We do get a “buggy” that can revisit old towns instantly; a nice touch, although I’m not sure what it’s supposed to be doing when it flies up into the air.

So yeah, this game sucks. But I won’t retreat! I won’t be defeated! And I won’t turn back! 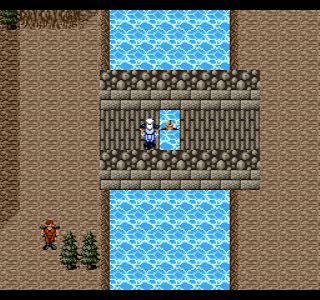