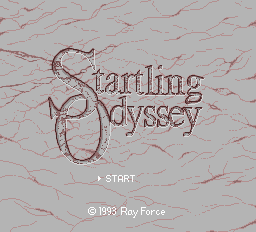 As I’ve said before, this blog is still primarily a Super Famicom blog, so I have stricter standards for continuing to play the PC Engine games. Startling Odyssey is a perfect example of a cookie cutter RPG put together with a string of cliches and standard RPG gameplay. If this were on the SFC I would play it through, but for the PC Engine I’m fine playing it for a few hours and moving on.

The opening scene is familiar territory. Long ago there were evil forces in the world, but beings of light came to save humanity, and then left, but there are still descendants of those beings of light, and darkness is once again appearing in the world. 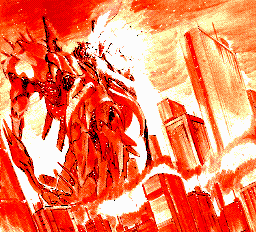 The opening scene has some nice orchestrated music, but then of course you go from the voiced cutscenes to this: 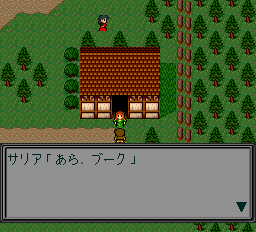 The main character, Leon, is a sword user who also studies magic under an old man in town. His friend Sophia has recently returned from three years of study in a seminary. 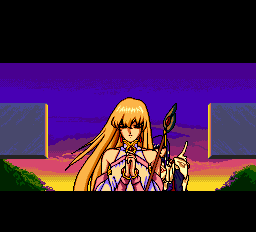 There are a lot of earthquakes lately, and increased monsters. On the day the game starts, an evil guy named Zowder comes to the town, looking for descendants of the beings of light. It turns out Leon’s mother is one of them, and she fights the enemies off with spells, but Zowder uses a hostage to capture her and turn her into stone. Thus begins Leon’s quest to save her. 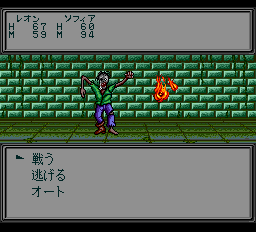 The battles are completely normal AMID, and the encounter rate is high. However, it is nice that the MP values are high enough that you can frequently use spells, and the “escape dungeon” items are cheap enough that you can explore the dungeons and then leave when you’re weak rather than grinding until you can survive.

The first quest is to find gunpowder in a tower so that we can blow up the rocks blocking a tunnel to the mainland. This will also help the island which is suffering since ships are no longer able to come to the island (due to the monsters and earthquakes).

When I reached the mainland, I then had to make it through a mountain pass that was supposedly guarded by thieves, but instead it was just monsters. After making it through that, the king in the next castle charged me with clearing out monsters nearby.

So that’s where I stopped. Everything I read about this game says it’s a completely average, playable RPG from this era. So it’s not bad, but there’s no reason to play it anymore.

Next up will be Ranma 1/2 for the SFC, after Little Master 2 for the Game Boy on my other blog. Ranma should be interesting and rather nostalgic.