The Ys series has a strange history. The first three games came out for computers, and then were ported to many different consoles. Up until very recently, Falcom did not employ any console programmers, so they always outsourced their console ports to other developers.

Ys IV is an interesting case because there are actually three versions of the game. In 1993 Falcom did not make a computer Ys IV, but instead outsourced the development to two different companies. Tonkin House brought out Mask of the Sun for the Super Famicom, and Hudson brought out a completely different game Dawn of Ys for the PC Engine. Both games were confusingly labelled “Ys IV”. Almost 20 years later, Falcom developed Ys: Memories of Celceta, which was a completely new game in the same setting that is now considered the canonical Ys IV.

Back to 1993, Dawn of Ys is superior to Mask of the Sun in every way. It’s a followup to Ys I&II, going back to the traditional “run into enemies” gameplay and involving a lot of voiced dialogue and a few cutscenes (more of both than Ys I&II had).

This is also unusual among PC Engine CD games in that it actually has a full patch. As I’ve said before, fan translators have a tough time with PCE CD games because, a least in all the games I’ve played so far, they have a lot of voiced dialogue with no subtitles. But for Ys IV someone actually made a full fan dub of the game, plus a translation patch for the rest of the text. So this will be more of an overall review than a step-by-step account of the game.

I’ve wanted to play this game for a long time. I remember somehow knowing about this game when I was a kid, even though it never came out in the US. It must have appeared in some magazine as a possible upcoming game? 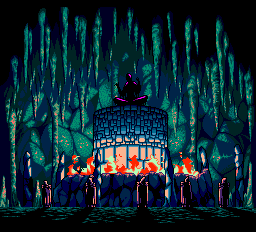 The game opens with Adol and Dogi returning to Esteria, where Ys I took place. But he’s only there briefly before he sets out for Celceta where a new adventure awaits. The opening cinematic sequence is like all the PC Engine games; a combination of voice, still pictures, and slightly animated pictures. Some baddies are trying to revive an evil demon of some sort — a familiar sight in RPGs. They fail, of course. Adol arrives in Esteria and soon meets several important NPCs, including Karna. 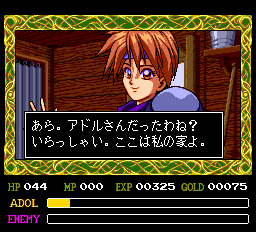 The battle system, as I said, is the same “run into enemies” as before. 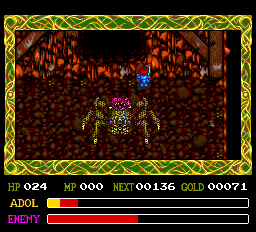 I feel like the screen is a little bit squished; I feel like they could have reduced the size of the border and the HUD at the bottom while still allowing it to be within the PCE’s processing power, but maybe I’m wrong.

If you’ve played Ys I&II you will be in very familiar territory in thise game. I think that after Ys III, Hudson wanted to repeat the success of I&II by making basically the same game in a different setting. The graphics are somewhat better but the game is the same length as I&II, roughly. 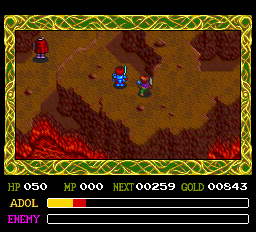 At times another character (usually Karna or Dogi) will accompany you. They can kill enemies often in one or two hits, which is somewhat helpful, but it also means they’re stealing your XP.

Because this game has a full translation patch I don’t want to give away too much. The story is run-of-the mill, but the voice adds some memorableness to the villains. 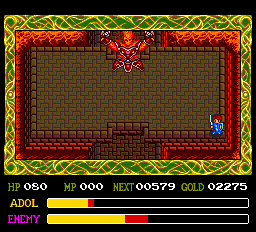 In the first section of the game, Adol is solving various small problems that pop up while trying to figure out what’s going on in Celceta. Eventually the main villains are revealed — the “Clan of Darkness”, who is working with a winged being to revive a lost castle. 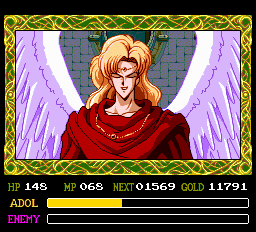 At the same time, Adol gains control over the ancient magics of Celceta while learning the backstory of what happened to the land. There’s a neat part where you get to return to Esteria and even go to Darm Tower again, complete with the music from Ys I (fortunately you find a secret passage so it’s nowhere near as long a dungeon). 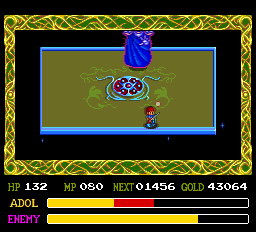 In contrast to Ys I&II, many of the bosses require you to use the fire or freeze magic to shoot at them. Otherwise as always you have to figure out the attack patterns of the bosses, and when and where you can hit them. Of course, being at the proper level helps as well. There’s a very useful item you can get later in the game that slows your movement but every non-boss enemy dies in one hit. With this item, grinding is much more manageable. 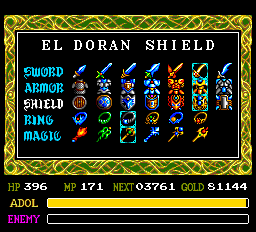 Overall the playing experience was very smooth. There was only one part that really annoyed me — I didn’t get a screenshot, but you have to make it through an area where jets of flame come up periodically, and if you touch even a pixel of the flames, you die. What makes it worse is that Dogi is following you, and if any pixel touches him then you get a game over as well. So you not only have to learn the pattern but make sure you move so that Dogi doesn’t lag behind and get caught up in the flames. I probably died 25-30 times trying to get through this…and you have to do it twice! Fortunately the second time is without Dogi, but come on. 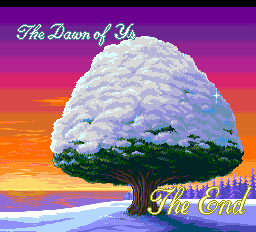 If you are a fan of the older Ys games, or retro action RPGs, there is no reason not to play this. It’s one of the best from this era.

Ys will appear one more time on this blog, with Ys V for the Super Famicom in 1995.