Stage 1 – Marth Sets Out
“Talis, where Marth has retreated, is attacked by pirates. Sheeda comes to request help from Marth, and he sets out to retake the castle.” 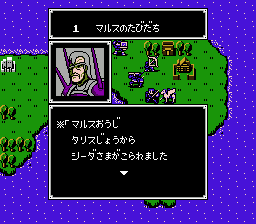 This is a well-designed starting map — it’s short and fairly easy,  but not so easy that you can just do whatever you want and win. It lets the player practice without having to repeat too much if they fail. There are some potential pitfalls that prepare you for later maps, such as letting Sheeda get in range of the archers or not killing the thief before he destroys the town. The main potential danger for a new player is relying on Jeigan too much. Before I even started playing any FE I knew about avoiding the “Jeigan character” because of their low stat growths. [EDIT: Apparently this is a common misconception, and the Jeigan characters are actually quite good to use.]

I actually did use Jeigan some on this map to weaken the enemies, but I accidentally killed the boss with him. This is not as big of a deal as I thought — I don’t know if this is a consistent feature of many FE games, but in this game, the XP given by an enemy is fixed by their class, and a small bonus for their level, with perhaps another small bonus if they’re the boss. I don’t think your own level makes any difference. 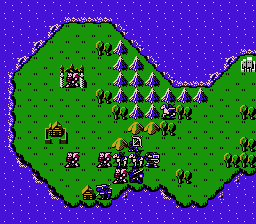 Other than that, I made sure to recruit Rifu from the house and get the 10K gold from the first house, and I bought a few extra weapons.

Stage 2 – The Galda Pirates
“Marth sets out for Orleans to meet with Princess Nina of Akanaia, who is already fighting against the Drua Kingdom. On the way, he is attacked by pirates.” 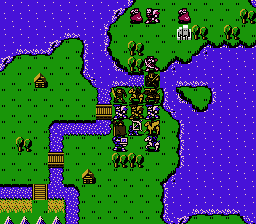 This is another fairly easy stage. It starts by getting 4 new axe users as companions. One of the pirates to the north will approach Marth and join the good guys on his own. There are two thieves but they can’t really get off the island to destroy towns unless you really screw up. 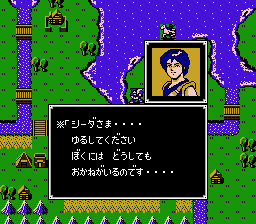 The only other thing to do on the stage is recruit Kashim with Sheeda. It’s obvious to do this because when he attacks, he asks Sheeda to forgive him (he needs money for his mother’s medicine). Since Kashim is an archer you have to be careful. Whenever you have a recruitment conversation with the enemies, there’s a BGM that I mostly associate with the FE stages of Super Smash Brothers Melee.

One other note: I don’t read strategy information beforehand unless I’m really having problems but sometimes I’ll look at it afterwards. Apparently you can leave one of the thieves alive, and set Rifu on a fortress. The thief will attack him over and over again — in this game, clerics gain XP by getting attacked. If they survive the attack they get XP equal to defeating the monster. So with this you can easily level Rifu up to 20. I tried this on other stages but I couldn’t get the thieves to attack him.

Stage 3 – Devil Mountain
“A fight with the Samshian Bandits, who live in Devil Mountain, directly in front of the Orleans Plains.” 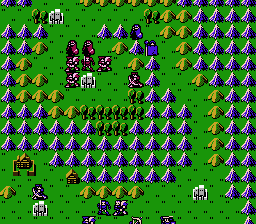 This is the first stage I had to restart several times. The characters at the top are Julian and Lena, two important people that you want to keep alive. Fortunately they can stay ahead of the pursuing enemy troops. The big problem is Navarre, the mercenary above the fort. He can be recruited with Sheeda, but he has a Kill Sword, which increases critical rate. This plus the danger of the archer meant I had to try a few times before I got everyone in the right position to pull it off. After this the rest of the stage is more of the same stuff. The house gives a Devil Axe, which no one can use yet, and I’m not sure if I actually do want to use it.

Stage 4 – Fight on the Plains
“In order to take back the Orleans castle, the team fights against the Macedonian army on the Orleans plains.” 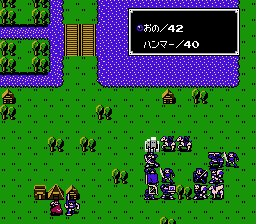 When this game was remade and repackaged with a sequel for the Super Famicom, 5 stages were removed from the FE1 portion. This is one of the stages. It’s the first one where you have to select which characters to use. I’m going the cheap route and mostly using the characters with the highest total growth rates, although I did keep Jeigan along.

I had to restart the map once because I didn’t know thieves could cross rivers. There’s one at the top that will reach the town if you don’t go after him, so rather than staying in the starting location and waiting for the troops, I had to go after them.

One of the houses has Machik, the first mage, who comes with his unique Excalibur magic as well as blizzard. Having characters that can attack from range 2 is nice but you do have to be careful — the boss has a javelin and can counter from 2 range. 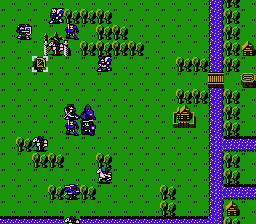 The only other potential trouble spot is recruiting Machis. You have to talk to him with Lena, the weak priest, and sending her into the middle of the enemies before other people have a chance to kill Machis could be tricky. I was able to do it in one try, though.

So far I’m having fun with the game. As I said, the tension of this game is high since a single bad move can lose you a character permanently. It’s a bit like Wizardry or some roguelike games. In the past, I have always gotten frustrated by the permadeath and quit FE games before I beat them. I’m hoping that the structure of a chronoblog like this will encourage me to finish them. I considered allowing some soft cheating like “1 save state per stage” but at least for now I’m not going to do this.

Let me know about your experiences with this game or any comments on what you’d like to see in the posts, and thanks for reading!