Before getting into the meat of the post, I want to make a few complaints about the interface. At this point we’ve already had many years of RPGs for the regular Famicom, so there’s really no excuse for things like the following:

On to the post. At the end of the last post, I had just gotten Fana. She has quite a selection of magic spells, although it’s mostly the usual cure/cause status effects, heal HP, and do damage. Unfortunately this game has a very common issue in RPGs. The magicians in this game have too few MP, and there are too many random encounters, to make magic useful outside of major battles. MP-restoring items are rare to non-existent, at least at this point in the game. 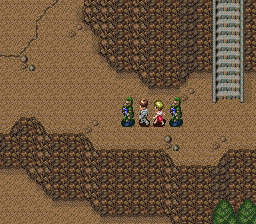 We hear about a war between the Bavalis and Mayoor, and are immediately captured by Bavalis. Fortunately the Bavalis are stupid, and make it fairly easy to escape their prison — it’s a small puzzle, but it just involves breaking the prison bed and tying a cloth into a rope to escape. Ryuu loses his laser gun and space equipment, but the Bavalis helpfully leave a chest of weapons and armor outside their prison for him to use.

The way the Bavalis camp works is strange too. If you talk to any of the soldiers they attack you, but otherwise they just walk around and do nothing. Inside the buildings there are random encounters, but outside there’s nothing. It seems like they should have at least made it if you touch an enemy there’s a battle, but maybe that was too annoying for them to code.

At the exit of the Bavalis camp there’s a Mayoor battalion leader named Kalon, He tells us to go to the Mayoor camp, and gives a pass to let us in. Once there, they are quite trusting as they tell us to join the Mayoor army in fighting the Bavalis — I suppose since they just captured us they think we’re allies. They also give us another party member, Rood, who unfortunately is another magic user.

The camp also has the first shops, so I was able to upgrade everyone’s equipment and buy some healing salves and antidotes.

That’s all for this post; after this I was somewhat lost and spent time wandering around; I gained some levels but made no progress. One small note I forgot to mention is that you can gain a level during a battle because XP is awarded immediately after each kill. That’s not really important but it’s a small oddity.