I was out of town from Thursday to today so I didn’t play as much this week as usual, and the update is a day late. I’m still enjoying the game — I think that as long as you can overlook the flaws in the game and enjoy the unusual gameplay it’s not that bad.

One additional gameplay element I discovered last time is that fighting random battles helps against the boss. The instruction manual mentions this but I thought they just meant it helped because you get items you can meld. But a Japanese site I saw did tests and it actually increases your stats against the boss fight the more random encounters you fight in the area with the boss. So that means you really can’t hit walls where you just can’t advance. This is important because you can’t go back to areas you’ve cleared and fight the monsters again, and if you beat one boss of a multi-boss area that kind of random encounter won’t appear anymore so you can lose the opportunity to get items. 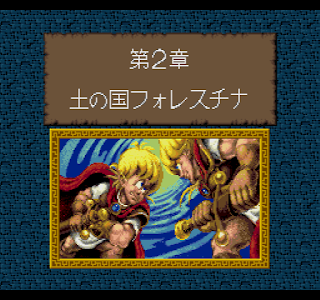 Chapter 2 is in the land of Forestina, and we quickly pick up the third party, the party of Earth. As you can see in the screenshot, there seems to be a mimic party we’re following through this area. In this kingdom there are actually several ways you can go, but in the end it’s still essentially a fixed path since you can’t move too far ahead if you’re at the wrong level. You can get some items, though.

The main things that happen here is that we get the Earth piece and replace it with the correct gem, and then proceed through the area. Along the way we keep finding these history stones that give little bits of information about an ancient war between Elves and Humans.

The big story section here comes in a library where you read about Zora’s story. He’s now working with you (sort of) against Shiral, who Zora thinks is going to destroy the world.

Apparently Zora loved Rishia, the princess of Murania. But she had to marry Jozel, the king of Elfaria (I was mistaken in the last entry; Elfaria is one country of this world not the name for the whole world). Zora was exiled and wandered around, stole a magic book, and fomented a rebellion in Murania. Murania defeated Elfaria after the coup and Rishia was killed, but Shiral used ancient magic of Elzard to defeat the 16 heroes that came to oppose him. Zora still pines for Rishia and is always making statues of her everywhere.

The boss of the area is Ag Uoo, who was impersonating Pyne (for no clear reason). He’s not very hard with the Earth party. It seems like in general each boss is easy if you use the right party to take him on.

Afterwards we learn that Shiral is having trouble controlling the power of the red springs found in each town, and Zora and Dalukan both think he’s not going to last much longer. At the same time we learn that Pyne is probably Rishia’s son.

Sorry for the short update but I didn’t play as much this week — I hope to get through chapters 3 and 4 at least this week.