With this game the blog enters 1993. This is the year that SFC RPG production really ramped up, although not quite as heavy as 1994-5.

Elfaria has actually been reviewed by two other bloggers, Boxed Pixels (which is still active), and Random Encounters (which is not). Both of them hated the game. I can understand why, although I’m actually enjoying it so far. It’s possible I like it more than I should because of all the crap I’ve played, but it seems to have had a pretty decent reputation in Japan and got a sequel in 1995. The biggest roadblocks for most players are going to be the battle system (which is almost completely automatic) and the lack of experience and gold. It reminds me a bit of Ogre Battle although it’s been so long since I’ve played that I don’t have a clear memory of how much control you had over the battles. 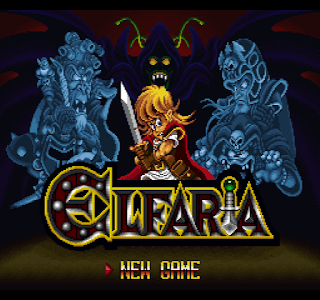 The characters have a distinctive style, done by the artist Susumu Matsushita. He is known for an American comic-influenced style, which reminds me somehow of the Foglio’s work even though it doesn’t look exactly like it. In any case it’s not the usual anime art.

The game begins with a cinematic opening and then the introductory story.

Elfaria has been almost completely taken over by Searal in the last 15 years, with only the small town of Roma left over, where our hero Pyne is from. He has been researching the long-ago magic wars and thinks the legends from that age can help him overcome Searal’s forces. Suddenly a woman named Ell appears before him and tells him the time to set off on his journey is here. She disappears, and Pyne takes three companions and sets off. Eventually we will end up with 4 parties of 4 characters each.

The story so far is not especially detailed — there’s not much else to say beyond that opening story. I’ve completed chapter 1 and there was a bit of development with the mysterious Zora on the enemy side, but not much. After the initial scene you then start the game.

The basic gameplay involves recapturing towns from the evil forces. The game is divided into chapters, with each chapter being a different continent of the world. You start with just Pyne’s party, and move him to the next town where there’s a boss.

Once you reach a town, you can enter it and then walk around an area with random encounters and chests until you find the boss and defeat it, which then frees the town.

There are two aspects of the gameplay that are unusual. The first is that there isn’t any experience or money. You move up levels by freeing towns, and you gain 1 level per boss the town had. Chapter 1 had no optional towns, so the level was fixed based on where you were in the game. In place of equipment, you have the “meld system”. Each character has 5 slots on their weapon. You can put any item in those slots (except for a few key plot items) and they will affect the stats of the character, and sometimes add special abilities. Monsters will drop these items, as well as the Herbs that you can use to heal between battles. Somehow I failed to get a screenshot of the meld screen so I’ll use the one from Bored Pixels:

The “Rod X”/”Mail X”/”Sword X” items just increase the relevant stat and do nothing else. Other items increase multiple stats or add special abilities. You can also find recipes to combine several items into one, although you sometimes have to go to a specific person to forge it. The meld system is a lot of fun — it’s not flexible in the sense that you can turn a mage into an effective fighter, but it gives you a little more freedom than just equipping a new armor or staff.

The sticking point for a lot of players is going to be the auto-battle system.

Each party has 4 members. The two front members are fighters who attack. The other two are magic users. One has an elemental damage spell and a debuff, the other has a heal spell and a buff. Your only control in the battle is choosing between the buff, debuff, and damage spell (or nothing), and running by pressing down. Everything else is done automatically. The buffs and debuffs do not take MP but the mage can’t use them if they have 0 MP remaining. The battles always involve 3 monsters (except for the final boss of the area) and you have to beat the front monster before that fighter can go back to fight the back person.

If you die in a battle, you just get sent back to a previous town. You can also choose “outside” at any point in a town/dungeon and you’ll be returned to the world map with full HP/MP. This was a good choice by the designers because it makes exploring ahead less risky, although I guess it means a game over is impossible? The only disadvantage I’ve seen of taking a long time is that sometimes a boss will come out of a town to try to retake the towns you’ve already captured. If you’re there it’s not too bad because you’ll be at full HP/MP, but if you died a lot and got knocked back to the starting town you might not be able to get up there quickly enough.

I remember the controversy over FF12’s AI system, but these kind of things have never bothered me that much. This is an abstraction of the usual RPG system of this era, which gives the illusion of more choice than you normally have. Yeah it’s frustrating when the healer doesn’t get the heal spell off in time, but that happens in other RPGs too.

After freeing several towns, you get the second party.

Pyne’s party is ice/water-based, the second party is fire-based. Each party is strong against certain monsters and weak against others, so depending on what monsters are in a particular town (and the boss) you might want to use one party over the other.

In addition to the towns, there are “natural areas” which are optional but have useful chests and maybe some drops from the monsters. This chapter has a cave and a forest.

Now with the second party I can use them against some of the “tenma” monsters that Pyne’s party isn’t as good against. Often in the towns with multiple bosses, you can make several runs into the town — sometimes you have to flip a switch to open a gate, or you can beat one boss and retreat.

Eventually we have to send Aldis’ party in to retrieve the Proof of Fire and replace it with the Blue Gem that Ell gave us at the beginning. This will stop the enemies from spawning in this area and now it’s just a matter of beating the final boss of the region.

In Kana Castle we meet the sleep-loving king. I used Aldis as my main frontperson in this place because a lot of the enemies are “tenma” type.

The soldiers tell us there are some hidden rooms in the caves and castle (fortunately they’re easy to find). Going through the cave lets us open a switch to go in the main castle, then we have to do another runaround to open the switch into the final room. Now it’s time to exit one more time and take on the boss,Yonapis.

He was fairly easy. It’s just him alone, and Aldis’ party matches up favorably with him. After the fight, Kanarn is freed from the evil powers. We get a quick cutscene with Searal (on the throne), Zora the mysterious wizard, and Dalukan, a knight of Elfaria who defected to Searal’s side.

Time for chapter 2, where we’ll get the third party. I feel like I shouldn’t be enjoying the game as much as I am.