Here’s another Shining Force game (with another coming up soon!) It’s the second game to be released on the Game Gear. As with Gaiden 1, I’m playing this on the Shining Force CD remake. I will withhold the final “wrap-up” post until I actually finish the entire SFCD game.

As with Shining Force Gaiden 1, there are no changes from the original to CD other than the quality of the graphics and sound.

The game is a direct sequel to SF Gaiden 1, taking places several years later. The hero from the first game goes off to fight a new enemy, leaving a mysterious boy (the new main character, Shuu), behind. When enemies attack to steal the Haja Sword from the first game, Shuu and the others go after him. 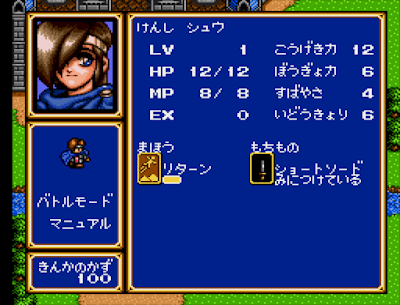 The first stage starts in familiar territory; by now we’re used to the starting party of the hero, a mage, a monk, two centaurs, and an axe user. 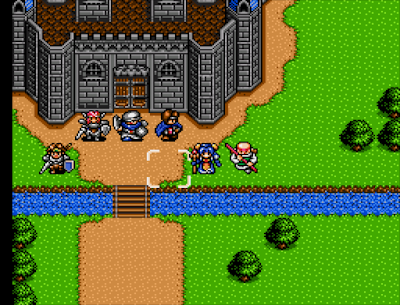 The stage presents no real challenges.

This one was a bit harder. There are spellcasting enemies that can gang up on you if you’re unprepared (I lost the Monk).

There do seem to be some new enemies in this game, at least.

I’m making a big effort not to let anyone fall behind in levels, because the centaurs tend to get all the XP. 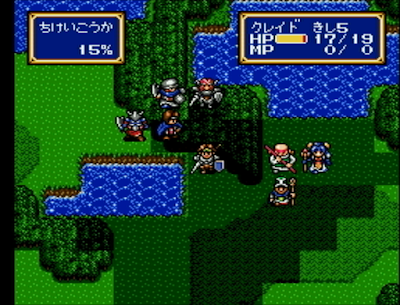 In this stage we’re still chasing after the guy that stole the Haja Sword. Not too tough, although the axe user keeps dying. The monk has gotten much more useful as he gains levels. 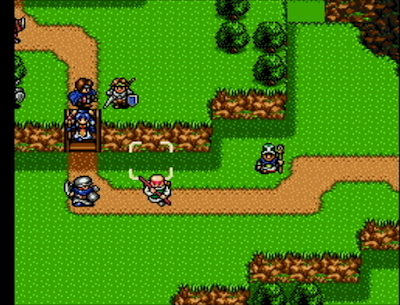 I actually had to retreat from this stage the first time; it works better to go around the left side. I made sure to search the well to get the Entrance Ticket, which lets you do the final “museum” fight after beating the game.

Finally a new guy; the person we were chasing turned out to be trying to save his village by stealing the sword. But the sword is still gone, so we chase after it to the next stage.

It’s hard to find things to write about for a lot of these stages because they’re small maps with fairly simple strategies — just move everyone forward, attack, and heal at times. I question whether I really should be doing stage-by-stage comments for games like this.

How about this picture of the sorcerer Gordon revealing himself:

Now we chase gordon under the caves; he summons some extra Zombies but that’s not very tough. As usual you have to make sure not to bunch up your guys to avoid getting targeted by the area effect spells — this is still doable now because the enemies only have the 1 area effect. 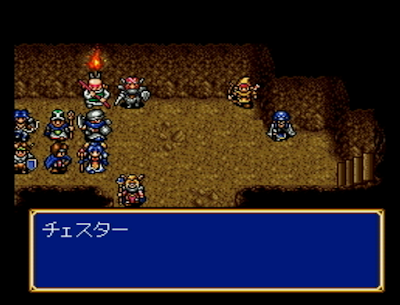 The next two missions are about capturing a boat. This one has some new enemies that are tough, but I managed to get through with only one loss. 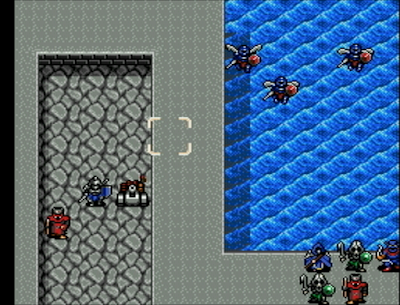 We need this boat because Kurisu has been captured by the enemy force and we need to go find him and destroy the I Om army. But after this stage, our force gets separated as a haunted ship takes off with half the party. The next set of missions split between the two parties. 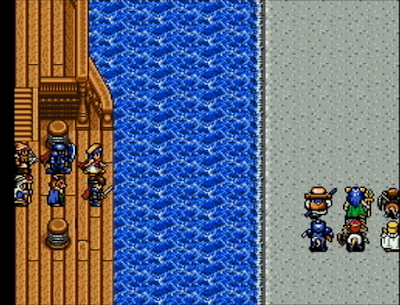 I think for the next post on this game I will only comment if there’s actually something interesting to say about the map — if it has some interesting feature or if there’s more than just basic strategy to beating it. That should probably be a general rule for this blog; I did it for the Little Master games and it should make for quicker and more interesting reading than just going over the same thing again and again or describing in detail a “strategy” that’s just moving forward, attacking, and healing.