This is not so much a quest as an event — a yearly festival in Sultan. It’s a pretty sad affair, with no visitors or patrons to enjoy it. Just a band, a few stores, and the “plate hunt” where you go in and fight monsters looking for plates of various metals that can be sold afterwards. Barely worth it. 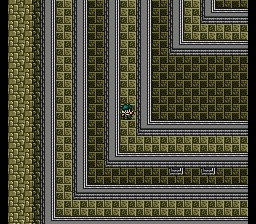 I found a mask on an earlier quest; with this, I can go to one of the villages and revive a demon, who I then have to kill. Balmar is unusable because the mask took him over. 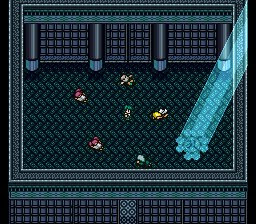 There’s a town with the winged guys in it called Lachwald; before they would refuse to talk to me, but now that I won the tournament they let me in. The king immediately dies when I arrive, and there’s a succession dispute between the son of the Minister and the son of the deceased king. I supported the King’s son, but in either case you just lead the guy down to the basement so he can recover a tablet proving he’s King. 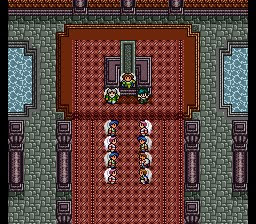 This quest gives us the 4th bead. Around this point I discovered that the Tiara is the best equipment in the game because physical attacks heal you; I had already sold 2 of them by this point because I didn’t know what they did, but the last one helped. If you play this, don’t sell them! 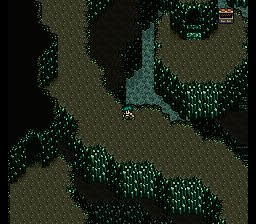 There is no real “final” quest but this is probably the closest thing. Once we get the 4th bead, a voice calls us to the mountain at the center of the map. This is a long stage with an outer area and then a cave. The monsters aren’t that hard except for this one and its palette swaps: 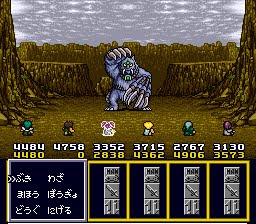 They can explode and do big damage to all your guys, which is tough if there are a bunch of them. I used the “flee battle” items for any fights with these guys. Other than that, it wasn’t that bad even though I still didn’t have the stats for a lot of people’s ultimate equipment.

There’s a boss, but as long as you have the lightning-absorb item and the resist confusion item, he can’t really do anything. 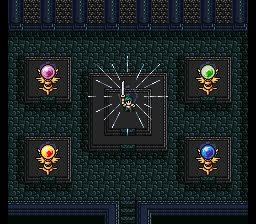 Kurisu gets the Hero Sword, making him a true hero!

Now I left the island. After a long scene where many of the people we helped come to say bye, Runna decides to go with Kurisu, and Balmar initially hangs back but decides he wants to go on his own journey and follows. Runna and Kurisu declare their love for each other and Balmar heads out on his own.

So that’s Soul&Sword. It’s OK; the high encounter rate is a big problem but that’s typical for games of this era. I’ll post a fuller wrap-up later.