[A number of sites romanize the subtitle as “koe no fuuin”, but it should be “inishie no fuuin”.) 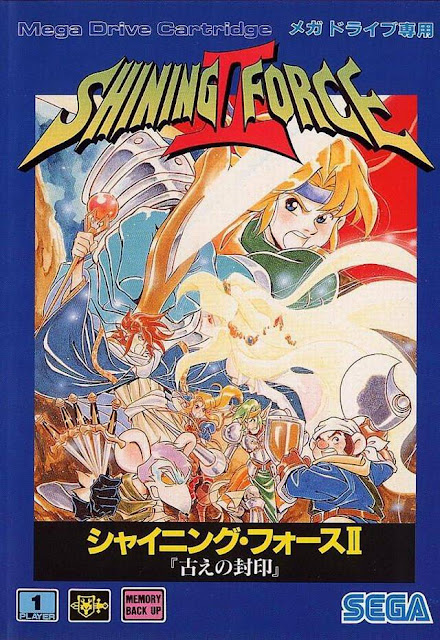 More Shining Force! This is the fourth Shining Force game in a two year period, second in the main series. From what I’ve seen, many fans consider this the best one (or at least the best one that was brought out in English).

The system has no huge changes from SF1; it’s basically the same as the one used later in the CD remake of the Game Gear versions. The interface is cleaner and easier to use. The RPG elements have been increased, with more town exploration and story sequences. The main system changes seem to be that you longer lose stats when promoting (yay!), stat gains on the whole are more even, and you need to be level 20 to promote now.

The Japanese instruction manual contains a long story introduction that’s not in the English one, I’ll summarize it:

Grans Island is to the east of Parmicia, and has two kingdoms, Granseal and Gram, who are friendly. Long ago, there were three demon kings on Grans: the fallen angel Lucifer, the sage Darksol, and the powerful, uncontrollable Zeon. They fought huge battles in Arcbarey for control. But Darksol sealed up Zeon in magic stones, and Lucifer and Darksol were chased away by the gods. All of the evil power in Arcbarey was sealed up in a tower north of Granseal. The two gems that sealed this tower — one light and one dark, were sought after by treasure hunters, but if they were ever removed, the evil would be released. Most of those who went looking for the gems couldn’t touch them, much less take them away. But the thief Shippo (“Tail”, the English version calls him Slade) was able to take them, thus releasing the evil and causing harm to Granseal… 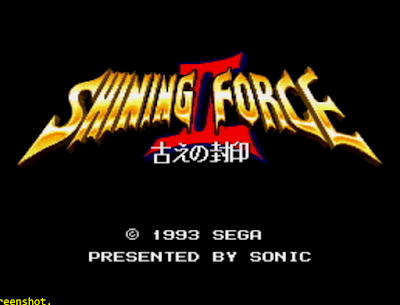 As with the last SF Gaiden posts, the early missions are not difficult enough to make a blow-by-blow description interesting. The way the game progresses feels much more like an RPG than a simulation game. The story is not about an army fighting to retake a kingdom or two armies fighting, it’s more like a standard RPG party doing things like saving a princess, traveling to the next town, or finding a sage. There is an interesting development in the story when you go to a new land and build a new capital there, although I assume we’ll be returning to Granseal at some point.

One annoyance early in the game is that the inventory is too limited — the instruction book says I will get a caravan later that I can store 64 items in, but I wish they had done something like Dragon Quest’s bag earlier in the game. 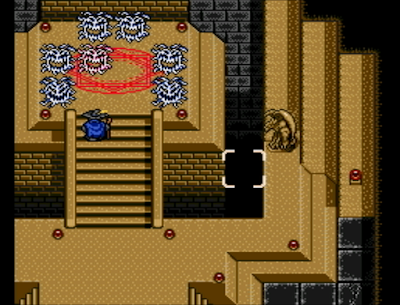 The party members are essentially the same as the other SF games. The thief Shippo (Slade) is new, although it’s not clear right now how he’s different from other fighting classes. I also have a turtle with low HP but high defense, and a child phoenix. I’ve been trying to keep my levels fairly close so I have a rule or guideline that if someone is 4 levels ahead of the lowest levelled character I avoid attacking with them if I can.

Battle 11 was the first one I actually had a bit of challenge with, because of the vampire bats that cast area spells. I’m used to watching out for mages by this point but not bats. 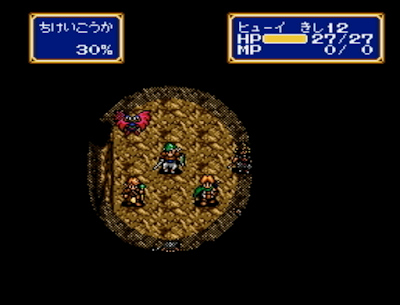 Battle 13, in town, was the first one that I couldn’t beat just by marching everyone forward and using basic tactics. I lost a bunch of guys here. One thing that makes SF easy is the cheap revive cost; I like revival better than permanent death but I think it might have worked better to make the revive cost double or even triple what it is now, so that you might actually have to think of replaying a stage if you lost too many guys. 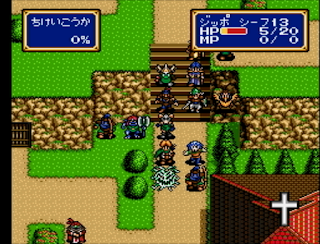 Battle 16, against the Kraken, was annoying because the tentacles don’t move in very fast, and when they do, only one person can attack at a time unless they have a range weapon. I sent out my two fliers to beat the Kraken head but they died with the head at 1 HP. Even when the head finally came in it took several more deaths to get someone close with a turn to kill him — I probably could have played this stage better but at least I won.

Battle 18 is against the giant statue Taros. It’s a tough fight because he can often go twice before your guys can go once, the Achilles Sword is the only thing that can hurt him, and he has an area effect spark attack. I think part of the strategy has to be having other guys who can take the hits, even though he seems to go for the main character (because he had the Achilles Sword?) This took me three tries. 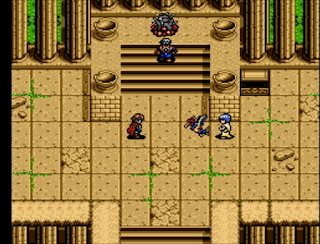 In the Elven Town I wasted quite a while trying to find the Vigor Ball only to finally figure out it’s not in the Japanese version. I also wasn’t able to get to the Mithril or the secret battle, but maybe I can come back later and figure it out.

The next few battles got more difficult. I’ve now promoted all of my characters except for Mick; I’m going to wait until I can make him a pegasus knight. I didn’t want my archer to be one of those bow machine carts, but apparently I hit the wrong thing and that’s what he became. He does barely any damage.

Battle 22 is the chessboard battle. At first this seems like a really tough battle because the enemies don’t come for you unless you’re in range, then you get swarmed. However, you only have to beat the King to end the battle so in the end it’s not that bad. 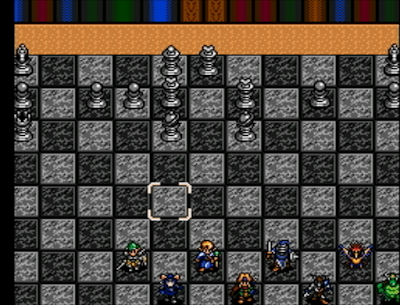 I’m nearing the halfway point of the game. Once again I want to say that this really feels more like an RPG than a strategy game, which I think is what they were going for.